Getting to Kanazawa's Ancient Neighbor: Tsurugi

Travel to Tsurugi on a quaint local train in 30 mins.

By Susan May
Community writer

The town of Tsurugi has existed for millennia, located at the foothills of Mt. Hakusan, where the Tedori River spreads out over the plains. The town offers many interesting cultural experiences and sights, and the Hokuriku Railroad is the easiest way to access it. Bikes can be carried onto the train from Nomachi Station*, making it ideal for riders wishing to explore the mountains, and the Hakusan Tedorigawa Geopark.

*Bikes are not allowed to be carried on during winter; Dec 1 to March 16

The line was originally opened in 1915, and ran deep into the mountains. However the train now stops at Tsurugi Station. The train can be caught from Nomachi in Kanazawa, or Shin Nishikanazawa. In this article you can learn how to use the train, even if you don’t know any Japanese.

For more detailed instructions, see below!

From Kanazawa Station take any JR train marked as ‘Local’ heading to either Fukui or Komatsu. These trains are displayed on the “Hokuriku Line for Fukui, Osaka, Maibara” timeboard furthest to the left as you enter the station. Ride the train one stop to Nishi-Kanazawa (about 5 minutes).

After arriving at Nishi-Kanazawa Station, exit through the ticket gates and take the East Exit (to your right after exiting the ticket gates). Walk down the stairs and turn to your left where you will see a small one-platform station. This is Shin Nishikanazawa Station for the Hokuriku Rail Road.

Move to the single platform, and when the train arrives jump on! As you hop on, grab one of the numbered tickets from the ticket machine by the door. Unlike JR, the tickets for the Hokuriku Rail Road are paid for depending on the station you board from and/or get off at (see more about the ticket system below).

For now you can sit down, and prepare for a retro-like train ride.

4. Get off at Tsurugi

When the train arrives you will need to depart at Tsurugi, the last stop. Present your numbered ticket to the guard, and pay the fee. If you boarded at Shin Nishikanazawa, your fee will be ¥500. If you don’t have change, you can break a ¥1000 note using the change machine at the front of the train. Simply insert your note into the slot in the side, and it will spit change out.

If you’re traveling near the lower area of Kanazawa City, the Nomachi Station is likely the most convenient. It is located just a short walk from the Katamachi area, near the Nishi Chayagai street.

The Nomachi Station is the first station along the Hokuriku Rail Road, Ishikawa Line, so you need to purchase your tickets before riding the train (if boarding at other stations, the process is different. Read more below).

To the left of the ticket gate is a ticket machine. Simply put in the amount of money needed for a ticket, and press that amount. If travelling to Tsurugi, the fee will be ¥500, so put in some money, and press the 500 button. If travelling to other stations, the price is listed – with English – on the machine.

When the train arrives the ticket gates will open, and a conductor will guide you through. Simply show your ticket as you pass, get it stamped, and jump on the train.

3. Get off at Tsurugi

When the train arrives you will need to depart at Tsurugi, the last stop. Give your ticket to the guard as you leave.

Whether returning to Nishi-Kanazawa Station or Nomachi Station, you will need to buy your ticket in advance at Tsurugi Station.

About the Ticketing System

1. Boarding from Nomachi and Tsurugi

Tickets must be purchased in advance when boarding from Nomachi or Tsurugi Stations.

When boarding from stations along the line, you must take a numbered ticket as you enter the train, to prove what station you boarded at.

If you already have a paid ticket, place it into the box at the front of the train as you leave.

If departing the train at a mid-way station FROM a mid-way station, you need to pay the fee before you depart. This will require knowing the expected fee, and preparing your change before the train stops. You can search the fee on Google Maps, or if you know the Japanese for the station names, you can check on the board at the front of the train, or online: http://www.hokutetsu.co.jp/unchin-fare#no1

When the train stops, the conductor will open the top of the change machine. Show them your ticket and your change as you put it into the box on top of the machine.

4. Departing from Nomachi or Tsurugi

If getting off at Nomachi or Tsurugi, ticket inspection and payment is made at the gates, after getting off the train.

If you boarded at Nomachi or Tsurugi, simply give your pre-paid ticket to the conductor as you pass the gates.

If you boarded mid-way, show the ticket you collected as you boarded the train to the conductor, and hand him the correct fee. You can search the fee on Google Maps, or if you know the Japanese for the station names, you can check on the board at the front of the train, or online: http://www.hokutetsu.co.jp/unchin-fare#no1

If you do not have the exact change, you will be guided to the conductor’s desk where they will give you the correct change. However to avoid confusion, you can split a ¥1000 note, or a ¥500, ¥100, or ¥50 coin at the machine at the front of the train at any time. To split money, insert your money into either the coin or note slot on the side of the machine, not the box on top. 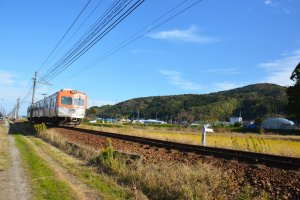 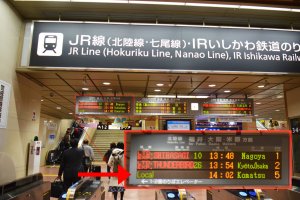 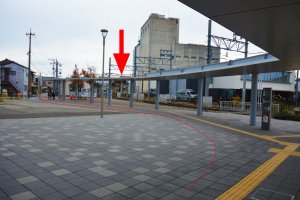 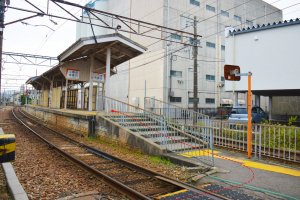 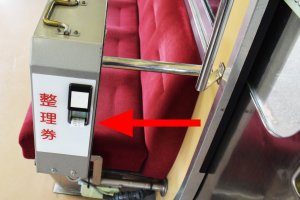 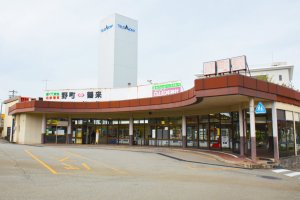 Thomas Smith II 23 hours ago
This was super helpful, saved me a lot of confusion and embarrassment, thanks so much!
Reply Show all 0 replies

Kim 3 years ago
Such a helpful guide!
Reply Show all 0 replies
2 comments in total
Back to Contents