Mount Goyo, the Top of Iwate

The area around Mt. Goyo is Iwate's highest plateau

Mount Goyo (五葉山) and the surrounding park straddles 3 cities, Kamaishi, in the north, Ofunato, in the south and Tono, on the east. It's accessible from any one of those cities. We started from the north access in Kamaishi, being the closest for myself and my friend. It turned out to be the longest walk to the top but a pleasant journey.

The walk itself isn't that long, just under 10 kilometers, one way, but we went through a lot of different vegetations. The trail starts in old growth deciduous forest with large walnut, oak, birch and other types of trees. A little higher the trees, are a mix of cedars and other coniferous, they are smaller but very thick, without the trail it would be impassable whereas in the lower part of the mountain we can easily walk through the forest. Near the top, it's full of wild rhododendrons, that would be very nice to see in full bloom, and other small bushes. The area near the top is off limits, except for the trail, to keep the flora intact.

We started at a place called Nirei no ki daira tozan guchi (楡の木平登山口), on the attached picture of the map, it's on the top right corner. That was actually the end of the road that we took, there is a small parking lot for only about 10 cars. From there the elevation gain in about 500 meters with a gradual incline. It seemed much steeper on the way down, I find it's usually harder to go down hill than up a mountain, we use muscles rarely used in other activities. One of the things that impressed me was all the granite boulders all over the landscape, they looked like someone had dropped them here and there at random. They are often arranged in clusters and make for a very picturesque hike. One of the reason that we wanted to go up there was to see wild deer in their natural habitat. I have seen the deer of Nara before, but in my books that doesn't count as wildlife, since they are domesticated. We were lucky to see a couple if for only a few seconds, they are indeed wild and don't like the presence of humans. I wanted to get some pictures but they were too fast. One thing that we saw a lot of though was deer foot prints on the trail, all the way from the start right up to the top.

To get there, we used Route 283 from Hanamaki, about 2 kilometers after the Sennintoge Tunnel exit, there's a Family Mart store on the left (north), just after that there's a traffic signal and you turn right, going south. It's about 12 kilometers from Route 283, the first half of the road is paved but very narrow, the last part is gravel. You'll come to a few forks in the road, follow the sign; (楡の木平登山口)

If you're coming from Ofunato. take Route 45 north and look for Route 193 east, that road is also quite narrow, so proceed slowly. About 10-12 kilometers later you"ll see a sign for Mount Goyo (五葉山)

It's a bit more complicated getting there from Tono, you have to change roads several times, So I would recommend starting from either Kamaishi or Ofunato. 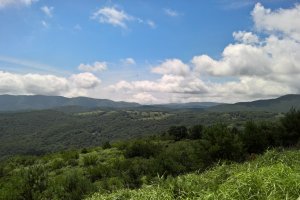 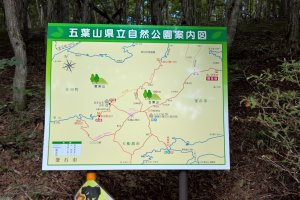 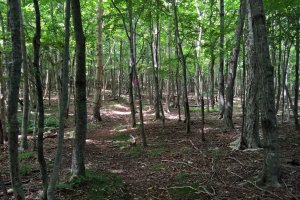 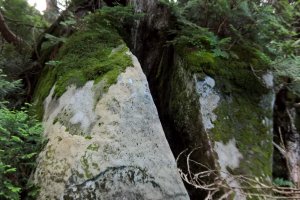 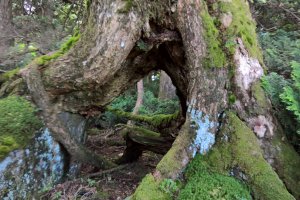 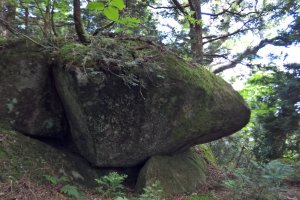