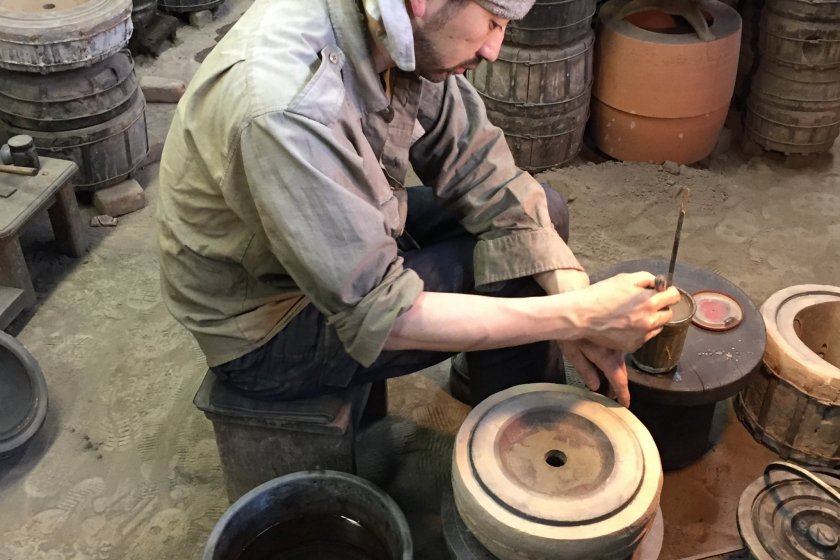 A fine tradition of Morioka

At work in the studio of Morihisa Suzuki

This spring a long-time collector of Japanese traditional crafts drew my attention to a cast iron kettle that she had received many years ago as a gift. Never once had she used it, but instead kept it in her dining room, hanging from a jizaikagi adjustable pot-hook by her beloved mizuya-tansu kitchen chest. I became curious about this pot - it displayed the “nanbu tekki” mark showing its traditional origin, and still contained an instructional leaflet within - so I followed up with some research on the topic. And then some more...

About two months later, with a crusader’s desire to see this venerable product in the land of its birth, I boarded a Hayabusa Shinkansen from Tokyo, bound north for Morioka.

The history of Nanbu Tekki

Around nine hundred years ago the craft of iron casting spread out from the imperial capital of Kyoto to different parts of Japan, including the northern capital of Hiraizumi, in Iwate prefecture. Here the abundance of natural resources, including coal for smelters, and high-grade, iron-bearing sand, allowed the craft to thrive. Later, even the locally-sourced joubouji lacquer would be used in the outer finishing of kettles.

In feudal times the Iwate foundries produced various tools, but they grew particularly renowned in the Edo period for their kettles, which were cast in various shapes and sizes to satisfy the preferences of practitioners of the increasingly popular tea ceremony (sado). For instance, the classic ‘mozuya’ kettle of today takes its name from Mozuya Soan, the son-in-law of the tea ceremony master Sen Rikyu. Both men preferred this square-shouldered kettle in their tea practice, though kettles were already available in many shapes and motifs. Note: a kettle without a bail (metal handle) is a chagama, an essential accouterment of the tea ceremony; one with a bail is called a tetsubin.

The rise and fall of Nanbu

During these centuries the Nanbu clan ruled over much of Iwate, and the cast iron of this region became popular under this name. But 'Nanbu Tekki' was only adopted as a brand name much later, in the mid-twentieth century, at a time when cast iron skillets and heavy kettles were already falling out of favor with Japanese consumers. The age of convenience - of coated pans, electric hot-pots, and the education obsessed kyoiku mama - had arrived.

Though the weight of iron will always be an issue - it takes a firm hand and strong wrist to wield a cast iron skillet or kettle - today, cast iron is recognized as a healthy choice for cooking. One advantage is the infusion of iron that occurs when water is boiled in cast iron. This benefit, along with the superior flavor of the water, only happens in iron kettles without enamel interiors, a point health-conscious shoppers need to remember. Traditional kettles are brushed with lacquer on the outside, which preserves the metal and creates a fine patina over time, but have no inner coating.

Perhaps due to the above-mentioned benefits, and because of their beauty and provenance, fake Japanese kettles are now flooding the global market. Made outside Japan, but sold new as “Japanese nanbu tekki” on the world’s largest e-commerce sites, and put up as “heirloom” kettles on auction sites, these bogus products are being sold in large numbers to overseas buyers. Could these cheap knockoffs possibly be made with low-quality recycled metal containing plastics, chemicals, rare earths or other nasty impurities found in junk or scrap metal? Something to consider before placing a bid, or adding one to your cart!

Back to the land of genuine Nanbu Tekki

Let’s return to Morioka, where in two days of pathfinding on foot, by bus and on trains, I visited a number of local cast iron producers, and found that the Nanbu Tekki tradition is alive and thriving. Artisanal pots of excellent quality cost anywhere from ¥30,000 to ¥100,000; those created at one of the renowned studios, such as that of the fifteenth-generation Morihisa Suzuki Studio, start at around ¥100,000. Note: at this 400 year-old studio, which I visited, the order backlog for kettles is several years. But many boutique-quality cast iron objects, from beautiful ikebana vases to chopstick holders (hashioki), or even a gorgeous tea ceremony chagama, are available in their showroom, and from their website.

For those with an anemic wallet

But if, like me, your heart is set on owning a genuine nanbu kettle, but you’re nearly penniless, do not fret – all is not lost! There are many alternatives to collector-quality kettles, all made in Iwate. First, consider an inexpensive kettle by Iwachu or Oigen, both reputable companies in the Nambu Tekki tradition, each of which offers fine quality cookware and kettles for well under ¥10,000. When purchasing a kettle, be sure to differentiate between a kettle and teapot - they’re not the same thing - and again, watch that inside finish. (You want iron in contact with your water!) Both Oigen and Iwachu sell online, and ship out.

For those with the means to travel

If you’re not destitute, I encourage you to go up to Iwate, and visit Morioka Tezukuri Mura (Handicraft Village), where you can find beautiful designer pots starting at around ¥30,000. There are several studios here, and if you are lucky, as I was, you may enjoy the experience of seeing the ikomi (metal pouring) process. Even if you don’t, lifting and touching artisanal-quality kettles - feeling the marbled texture of the iron “skin,” noting the differences in weight and volume (important!), choosing between a classic motif (hailstone, bamboo and crane, cherry blossoms, etc.) or a modern ‘raindrop’ form, and asking lots of questions - is a mission well worth pursuing. The bus ride from Morioka Station takes 30 minutes.

And don’t forget the TLC

Most importantly, get yourself (or your loved one) a kettle that is large enough, but not too large. Cast iron is heavy enough anyway, and you never want to leave leftover water sitting in the pot. Remember, natural iron needs a bit of extra care; show your kettle plenty of love, and it will repay you in kind. If you neglect it, it will rust and retire young; if you use it often, and keep it dry when you don’t, it will age beautifully, and spoil you with delicious, iron-enriched water for years to come.

To go directly to Morioka Tezukui Mura, take the Hayabusa bullet train to Morioka, then jump a number 10 bus to the village. They depart about once an hour. To reach any of the local artisanal studios, you will need to take a cab from the station. 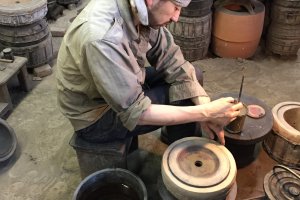 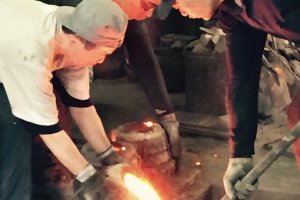 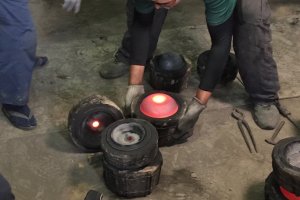 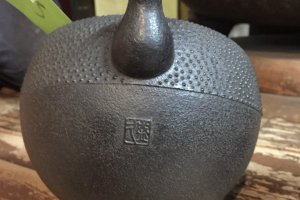 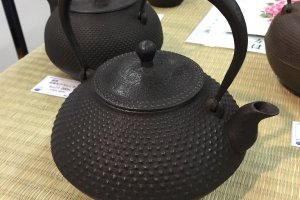 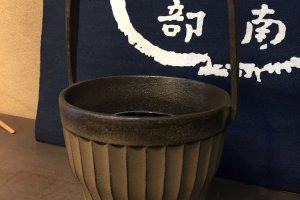 Elena Daurtseva 6 months ago
Collectors of Japanese kettles should really read this!
Reply Show all 0 replies

Bonson Lam 2 years ago
Great article, and very informative. I really appreciate you shining a light on this special tradition. It also reminded me of my journey in my "homecoming" journey with my antique kimono chest. https://en.japantravel.com/kyoto/quest-to-find-the-modern-day-tansu-kimono-chest/225
Reply Show all 0 replies

Elizabeth S 2 years ago
After reading this article, I have a whole new appreciation for cast iron kettles. It’s nice to know there are budget options, too.
Reply Show all 0 replies

Kim 2 years ago
I've seen these around but it's good to know that there are some on the market that aren't authentic - I'll have to be discerning when it comes to purchasing one myself!
Reply Show all 0 replies
5 comments in total