Serving nostalgia and allure since the Korean War

A harbor town, the sound of the whistle, the noise of the tide. Yokohama wasn’t always like this. The year was 1954, and the Korean War had just ended a year earlier. Japan was only starting to recover from World War II.

With its abundance of US Army and Navy supply depots, there were G.I. servicemen walking the streets in their immaculate uniforms. In the distance, the sound of whisky and cocktails, the laughter of beautiful women, the allure of foreign cars - all of these images appealed at a time when few Japanese could travel abroad.

A bar was born, and its name was Star Dust. Down the road from the bar is a sign saying United States Army Yokohama Deck Gate 1, with a barbed wire gate and a sentinel standing guard. The road was not paved as it is now, but cobbled. When it rained, a soft light reflected on the stone pavement.

A military man walked past me with a bag from the convenience store. After Japan's defeat in World War II, the wharf was seized by the Allied troops stationed there, and since the peace treaty came into effect in 1952, it has been used by the U.S. military.

This beloved bar on Yokohama's wharf is still here. It is probably older than most of our Japan Travel readers. The bar may have missed the Korean War, but it was no stranger to the war effort, serving as a logistics hub during the Vietnam War.

While it is over 50 years since it opened, nothing has changed. The American bar counters, wood floors and the jukeboxes with olden goldies from the 1950’s, 1960's and 1970's are all reminiscent of the times. If you insert a 100 yen coin, you can choose 3 songs. I put on a gentle big band tune by Glenn Miller and sipped a dry martini. The barman, who is the son of the owner and has been working here for 11 years, is an excellent maker of such martinis. There are about 100 types of cocktails, though mostly standard ones. The nostalgic bar is friendly and cheerful, and the moment you step inside the bar, you will fit right in. No wonder this bar was used as a backdrop for many films and TV dramas.

And so it goes.

From JR Shinagawa station, take the JR Keihin Tohoku Line and get off at Higashi-Kanagawa Station. If you take a taxi and ask for the Star Dust at North Pier, most drivers will know it. Of course, you can also walk from the station. Just walk along the seafront until you reach the bar, which opens just after 5pm. 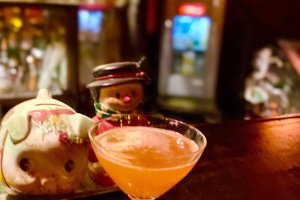 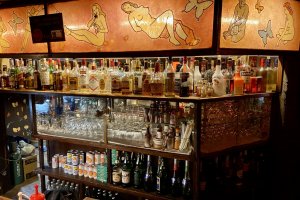 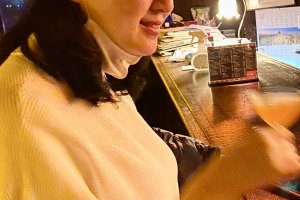 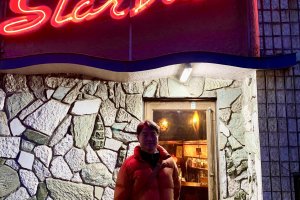 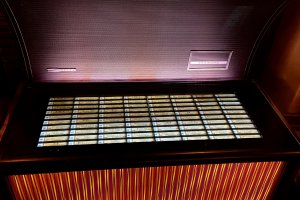 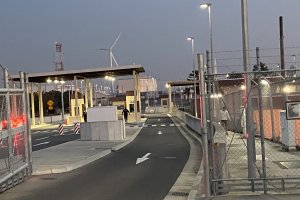 Elizabeth S 10 months ago
A valuable bit of vintage Japan right there. I'll check it out next time I'm in Yokohama.
Reply Show all 0 replies

Justin Velgus 10 months ago
The naked women on the back glass is an interesting choice for decor. There is a unique vintage style here for sure.
Reply Show all 0 replies

Kim 11 months ago
Fascinating history, thank you for sharing it with us!
Reply Show all 2 replies

Bonson Lam 11 months ago
If you would like to read more about some of the side stories from the Korean War in Japan, I suggest you check this out. https://en.japantravel.com/hyogo/kobe-central-church/20186
Reply

Kim 11 months ago
Thanks! I'll check it out!
Reply

Bonson Lam 11 months ago
This is a wonderful bar. Thank you for sharing this with us. I would love to go here.
Reply Show all 0 replies
7 comments in total