A famed Shinto shrine in the old capital

The Heian Shrine (Heian Jingu) is a major Shinto shrine in Kyoto, and is popular not only as a tourist spot but also as a religious and historical center. It is notable for its huge torii gates and beautiful gardens. It was given the top rank of Shinto shrines.

In comparison to other historical venues in and around Kyoto, the Heian Shrine is relatively modern. Its story, however, goes back a long way. Emperor Kammu took the throne as the 50th Emperor of Japan in the year 781, and became dissatisfied with the then-capital of Heijo (in present-day Nara). He moved the capital to today's Kyoto, or what was then known as Heian-kyo, and the Heian Imperial Palace Daidairi was constructed. This marked the beginning of the Heian period of Japanese history, which lasted from 794 to 1185. However, the Heian Palace burned down in 1227 and was never rebuilt.

The year 1895 marked the 1100th anniversary of the establishment of Heian-kyo as the Japanese capital, and in commemoration, it was decided to build a replica of the old Heian Palace. Unfortunately, enough land could not be purchased at the local of the original site of the palace for the construction of that replica, so it was built instead in Kyoto's Okazaki area in a 5/8 scale of the original. This became today's Heian Shrine, which was dedicated on March 15 to deify Emperor Kammu as the ancestral god of Kyoto. The shrine was built in the style of Chodo-in, the "Official Compound" structure of the original palace.

Today, the Heian Shrine is among the most popular tourist destinations in Kyoto. It is also a popular location for school trips, and groups of students can often be seen exploring the grounds. The shrine's striking colors and spacious courtyards between buildings make for a beautiful setting. The entrance to the shrine features an enormous red torii spanning over the road, with traffic (and the Kyoto Marathon route) running through it.

The jewel of the shrine is the Shin'en, the gardens covering 33,000 square meters. The Shin'en is divided into four: the East, West, South and Middle Gardens. These traditional gardens are filled with ponds, plants and old-style structures, and are worth the additional fee to walk through them. Their best feature is the large number of weeping cherry trees, which make it a popular place during cherry blossom season in April.

The major event of the Heian Shrine is the "Festival of Ages" (Jidai Matsuri), held each year on October 22 to mark the anniversary of Emperor Kammu's decision to move the nation's capital to Kyoto. One of the most important festivals held in Kyoto, the Festival of Ages features a large parade starting from the Imperial Palace and ending at the Heian Shrine. The parade features approximately 2,000 participants dressed in historically accurate costumes of different periods of Japanese history, and stretches several kilometers in length. The portable shrines (mikoshi) of Emperor Kammu and Emperor Komei are carried.

For many visitors, a typical visit to Kyoto involves a good deal of shrine hopping. Plan your destinations wisely: the city is quite a bit bigger than it appears to be on your bus route map and is best conquered by grouping sites geographically. In terms of other famous sites, the Heian Shrine is north of Kiyomizu-dera Temple and Gion, east of the Sento Imperial Palace, and along the way to the Philosopher's Path and Ginkaku-ji.

The Heian Shrine can be accessed by taking a city bus to the "Kyoto Kaikan Bijitusu-kan Mae" bus stop, taking the Tozai subway line to Higashiyama Station, or the Keihan Raiway to Sanjo Station.

Find out more about Heian Shrine. 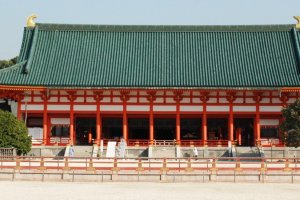 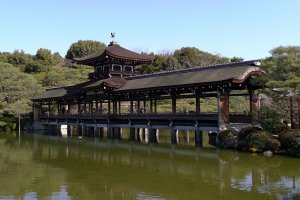 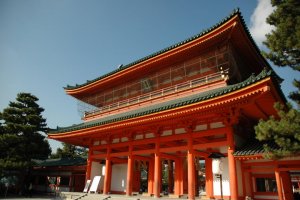 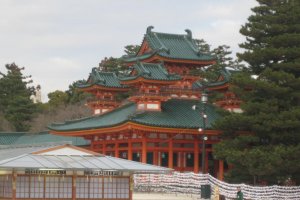 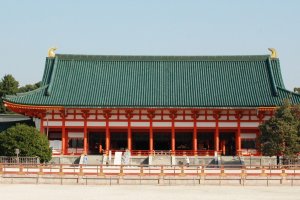 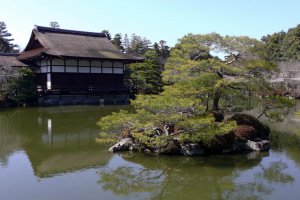