Saiho-ji Temple, commonly called Koke-dera or Moss Temple, has a unique atmosphere that has attracted famous people such as Steve Jobs (co-founder of Apple) and Richard Gere (American actor). But actually, it was not a moss-carpeted place when it was established in the mid 8th Century. The temple grounds had two different types of beautiful gardens in the 14th Century, and the Emperor and Shoguns often enjoyed these views and even practiced Zen meditation here. The 3rd Ashikaga Shogun, Yoshimitsu, designed Kinkaku-ji Temple, and the 8th Ashikaga Shogun, Yoshimasa, built Ginkaku-ji Temple, modeled after this Saiho-ji Temple. But in the late 18th Century, Saiho-ji Temple ran into ruin, and after that was gradually covered with hundreds of kinds of beautiful moss.

The garden of Saiho-ji Temple is not a mossy garden, but a beautiful moss world made by nature and man. The temple is located inside the curves of the Katsura-gawa River, where dampness remains and results in humidity averaging over 95% throughout the year. Moss densely growing in the temple comes in naturally. But the moss also needs appropriate sunshine and sufficient water to grow. To keep the moss in the best condition, priests and gardeners sweep and clean away the leaves from the moss everyday. If they neglect the cleaning, the moss will die.

In 1339, prominent Zen priest, Muso Soseki (1275-1351), was invited to revive the temple and gardens. He combined two existing temples together and constructed a double-layered garden. The upper garden was a rock garden built upon an old burial mound. The combination of rocks expressed a waterfall, basin and river. Priests in those days did Zen practice sitting at Shito-an, a building in front of the rocks.

The lower garden was a pond-centered excursion style garden. According to an NHK TV program, a two-story building, quite similar to the silver pavilion at Ginkaku-ji Temple, stood in the middle of the garden, roofed passageways surrounded the outer garden, two main islands in the pond were covered with beautiful white sand, and an arched wooden bridge with a covered observatory crossed over the pond. People enjoyed huge weeping cherry trees in spring, beautiful lotus flowers in summer, and colorful leaves in autumn. See this CG imaging by professor Hiromasa Amasaki.

The cycle of life

The Onin war (a civil war that destroyed Kyoto between 1467-1477) ruined the temple and these gardens. In 1485, 1568, and around 1630, Saiho-ji suffered flooding, and had to reconstruct its buildings a few times. A report stating that local people fixed and restored the temple buildings during the Genroku Period (1688-1704) is the last official record we have from those times. It means that the temple was discarded after that for quite a long time.

At around 1800, the entire grounds of Saiho-ji Temple began to be covered with moss. Now more than 120 species of moss can be identified here. The gardens have changed from bright and flowery to calm, and moss-carpeted. The head priest of Saiho-ji Temple today says that the temple itself is a large living organism, composed of moss, trees and flowers, and even priests. He thinks that some parts of the gardens undergo drastic changes over time, but that is the cycle of life.

How to get an admission card

Saiho-ji Temple doesn’t open its doors to the public unless you have a special admission card. If you hope to visit this temple, please make a reservation (see details).

Find out more about Saiho-ji Temple. 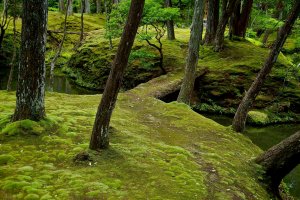 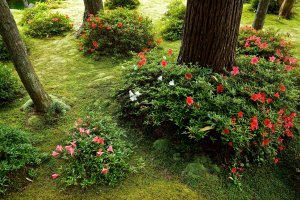 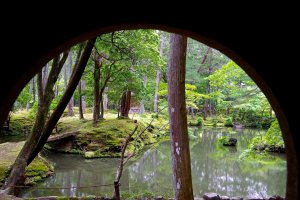 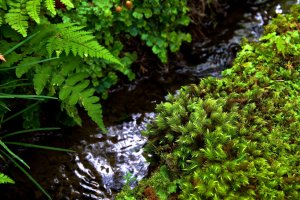 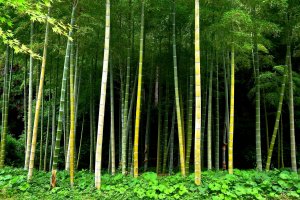 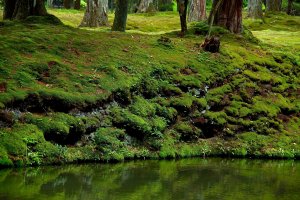 James Forest 5 years ago
Tomoko, when did you take the photos?
Reply Show all 0 replies

Tomoko Kamishima Author 5 years ago
Thank you for the comments, James, Wouter, and Tristan. The green color of the moss is at its best during the rainy season, and the beautiful red autumn leaves can be seen in late November.
Reply Show all 0 replies

Wouter Thielen 5 years ago
All that green is wonderful. It is a good thing that the temple regulates its visitors by asking for an admission card, so that it does not get flooded by too many people. I'd love to visit the grounds someday!
Reply Show all 0 replies
6 comments in total