Overnight on the Moonlight Kyushu

It is three o’clock at Okayama station. Three o’clock in the morning, that is. The schoolgirls and the housewives, the thirty something Gucci clutching fashionistas and the office workers congregating around the smoking room are nowhere to be seen.

I am on the Moonlight Kyushu, an overnight train from Hakata (Fukuoka), a carryover from the days of slow travel and a transport mode favored by students and backpackers. While JR doesn't run this service anymore, its iconic status may give rise to a future resurrection.

You will not find any executives or time stressed commuters on this train, they would be fast asleep in their homes or business hotels after a plane or bullet train trip. No, this mode of travel is for those with time rather than money, and sitting upright for eight hours it gives you plenty of time to people watch and reflect on your journey. While the seats are more spacious than a plane, don’t expect to fall asleep, as this journey is bound to play games with your mind, with the intoxicating mix of sleep deprivation and the eerily quiet nightscapes taking you to another world you didn’t think you would see in your dreams.

Like the song Zooropa, there is a certain edginess associated with traveling on a night train through cities with millions of people, all asleep, yet wondering what is going on in their collective memories. Passing through the empty abattoirs and the steel yards in Hiroshima, the dark silhouettes makes your brain wander, imagining what stories lie beyond those metal frames.

I once watched a documentary called “Sydney to Tokyo by any means”, which chronicled some crazy adventurers biking their way through the jungles of Papua New Guinea, and then northwards via Philippines to Japan. Like Charley Boorman, you could imagine yourself slow boating on the East China Sea to Fukuoka, and then taking the Moonlight Kyushu to Kyoto (month old beard and motorbike optional). Whether you are on your way from the Trans-Siberian Railway from Europe or backpacking your way from Khao San Road, the Moonlight Kyushu is part of the travelers folklore, one that culminates on your arrival in Kyoto. It was once the most easterly point of the famed Silk Road, where thousands of years ago merchants traveled back and forth carrying wealth and priceless stories from exotic lands.

An added advantage with this train is that it is one of the most efficient ways to use the Seishun 18 (Youth 18) ticket on JR’s local train network. At just 11,500 yen for five days of unlimited travel, this is easily the cheapest way to get around Japan. You do not have to be 18 to use this ticket, nor do you have to use this ticket over five consecutive days. Moreover you could share this ticket with your friends. Each day’s travel for one person is a stamp on the ticket, and if you are boarding a train just before midnight, you could buy a local ticket up to the midnight stop, and then use the Seishun 18 ticket, provided the local ticket is less than 2,300 yen. Despite my lack of sleep, this is a popular service and you should book your seat well in advance at any JR office. Some discount ticket shops also sell this ticket, including partly used tickets which comes in handy if you can’t use the entire ticket.

When you are using the ticket for the first time that day, present it at the manned ticket gate and they would stamp it, making it valid on every basic fare (non- Limited Express) JR train until midnight. After midnight, the ticket becomes invalid unless it is stamped again.

This ticket is only available during the summer, winter and spring school holidays. These days being: July 20th - September 10th (tickets go on sale from July 1st to August 31st); December 10th - January 20th (on sale December 1st - January 10th); March 1st - April 10th (on sale February 20th - March 31st). When using it, show it at the window to the side of the ticket gates, as it does not work in the standard ticket machines.

Unfortunately JR had stopped now this service, so for old time's sake, I hope they will bring it back. Otherwise, there is always the Nihonkai for those wishing to relive moonlight travel from Kyoto to Akita. Fortunately the Youth 18 ticket is still available, and remains one of the best ways to see the hidden parts of Japan, at a snail's pace. 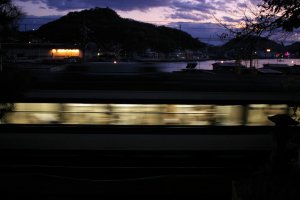