One wonderful thing about the metropolis of Sendai is how compact it is. Ask any of its citizens and they will tell you that it is not too big and not too small. This is great for visitors because it means many tourist spots are centrally located within 30 minutes or less of the central station, including such places as: Rinnoji Temple, the Mediatheque, or Toshogu Shrine. At the same time, being compact means less than an hour drive takes you to farm country or into the mountains! While out for a drive through the mountains I discovered the hidden gem of Johgi Nyorai Buddhist temple.

An hour and 15 minute drive or 90 minute bus ride from Sendai station leads you to the small village of Joge Aza Okura. Your first view is a street lined with shops and eateries leading straight to a large wooden gate. As you walk past the stalls, the smells of fresh and traditional cuisine invade your nostrils. My friend and I could not wait. We entered a shop which sells large slabs of deep fried tofu. It didn’t sound particularly appetizing to me at first, but splash some soy sauce on that fresh from the fryer sizzling masterpiece, and you are in heaven--or perhaps Nirvana given our Buddhist surroundings. We let our food digest and checked out some of the shops. Most noteworthy is a shop that sells dozens and dozens of handmade kokeshi dolls. Tohoku is famous for making several unique types, and you can purchase many right here.

After making your way through the streets you reach the main gate. It was built in 1931 and has calligraphy engraved into it from the 13th Prime Minister of Japan. This gate is not for the main temple. Although very impressive in its own right with sculptures and gardens, this courtyard is the Sadayoshi-Do, the mausoleum for Sadayoshi Taira. He received the printed scroll of Amida Buddha from Shigemori Taira, a government official during the twelfth century. The main temple is famous for enshrining the scroll that originally came from China.

A few minutes’ walk from the mausoleum where Sadayoshi is laid to rest is a lush park packed with gardens and small fountains. Actually the bushes and flowers are so thick at the entrance in late spring/early summer that you don’t see the massive 5 story pagoda until you turn the corner. According to the official website: “This five storied pagoda is a spiritual shrine built for Sadayoshi Taira and as a Buddhist symbol for the eternal peace of mankind.” Furthermore, there is only about 32 wooden pagodas in Japan, so seeing this is a real treat!

Exit the park the way you came then take a right. There is the main hall. Although it was only relatively recently constructed in 1999, the building is gorgeous and maintains a historic atmosphere. Its decorations, blending into the surrounding nature, and fine wood work draws the viewer to look at the temple in more detail. One thing you won’t notice are nails or bolts. The temple was painstakingly reconstructed using traditional techniques that still leave a structure strong enough to resist earthquakes and typhoons without modern metal fasteners. A plaque in English describes the history and tells the the Amida Buddha scroll is enshrined within. Prayers for wedding, relationships, or business can be purchased at the office. Otherwise check out the admission free museum to see some temple treasures. When you need a break from the city, go and enjoy your own spiritual journey through the mountains of Sendai to Johgi Nyorai and back. Check out pictures of the temple during winter and early spring here. 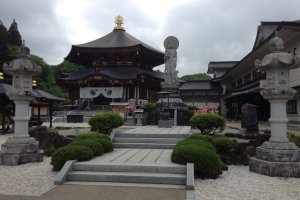 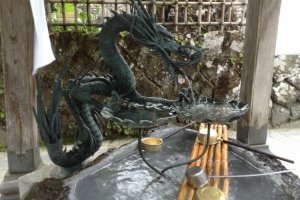 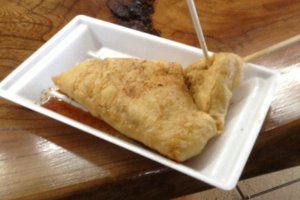 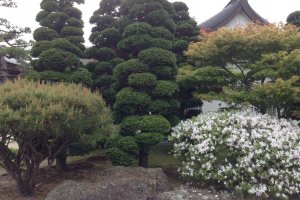 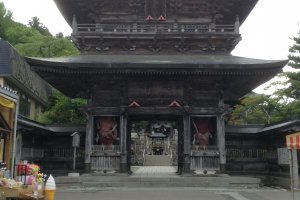 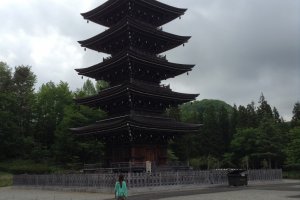