A charming temple with an island all its own

The most easily accessible of Matsushima's three bridged islands, Godaido is less than a minute's walk from the boardwalk, and boasts a small but historically important temple. Walking along the bayside from JR Matsushima-Kaigan Station, you'll see a sign indicating Godaido on your right just before the small park on the waterfront. Climb a small set of stone steps and you are faced with one of Matsushima's many beautiful red bridges – connecting to a stepping stone of a rock, and then on to Godaido itself.

Besides the temple, there's a small souvenir shop on your left once you climb the small flight of stone steps that sells knick-knacks, cellphone bobbles, and, if I remember correctly, ice cream. Just after the shop is a small Shinto shrine on your right, and straight ahead the temple. The island doesn't have much else — it's only big enough for the temple, but jutting out into the bay somewhat leads to new views of the stunning beauty that is Matsushima Bay.

Unlike any of the other bridges in Matsushima, those connecting the mainland to Godaido are slatted rather spaciously. Other than two beams running parallel to the bridge itself, it's best to watch your step, as the boards perpendicular are set with about 4 inches between each other, allowing you to easily see down the river below. Having a long stride myself, I was able to enjoy the novelty of this, but while crossing I saw more than a couple schoolgirls visiting on field trips cautiously negotiating the passes while clinging to the hand rails on either side.

Religiously, the Godaido Temple houses images of the Five Wisdom Kings of Japanese Buddhism. The shogun Sakanoue no Tamuramaro built a small temple called Bishamon-do on the island where Godaido now stands. Ennin, the founder of Matsushima's famous Zuigan-ji, placed the images of the Wisdom Kings at Bishamon-do, and because of them it earned the name Godaido (Five Wisdom Kings in Japanese). The current structure that occupies the island was built by Date Masemune (like seemingly everything in Miyagi) in 1604, in the Momoyama architectural style.

I made my visit when staying at Bansuitei Ikoiso Ryokan in the city. If you are in Matsushima, there's no good reason not to visit Godaido – the building is beautiful, the views fantastic, the site historical, and most importantly, it's free! 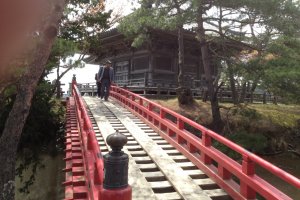 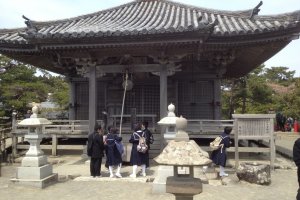 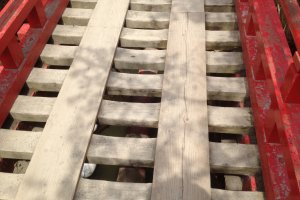 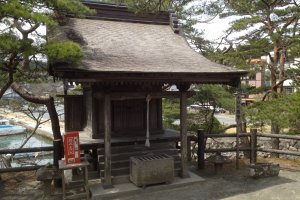 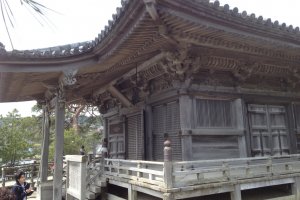 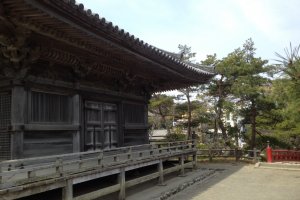 Elena Lisina a year ago
When I visited Godaido it was SO crowded!
Reply Show all 0 replies

Justin Velgus 6 years ago
Armand, thanks for the photo and fun story! That is really cool!!
Do you know if your father ever ate gyutan? The grilled cow tongue is a Sendai specialty started during the occupation after the war. Japanese had little money and were hungry, so they used discarded meat pieces from US soldiers to create a unique cuisine.
Reply Show all 0 replies

Armand Vaquer 6 years ago
In 1951, my dad was stationed in Sendai, but he had military police duties in Matsushima. He sent a photo of himself posing in front of Godaido to my mom. I visited it in 2006 and had a photo of myself taken in front.
Reply Show all 0 replies

Armand Vaquer 6 years ago
In 1951, my dad was stationed in Sendai, but he had military police duties in Matsushima. He sent a photo of himself posing in front of Godaido to my mom. I visited it in 2006 and had a photo of myself taken in front.
Reply Show all 0 replies
4 comments in total