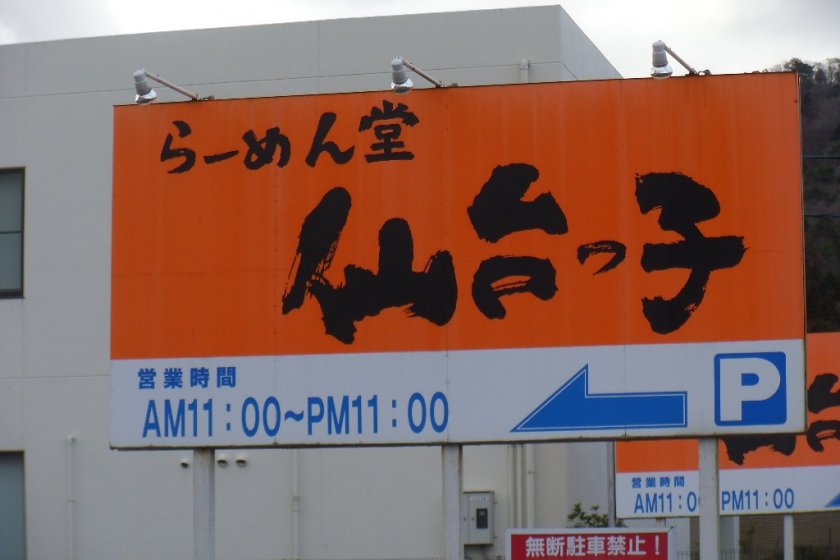 All Sendai-ko restaurants advertise with this big, orange sign. Keep a look out for one while exploring the city.

When visitors come to Sendai, they will go to specific must-see places, like Matsushima, Rinnoji Temple, or one of the largest statues in the world. Ochiai isn't one of these places. Ochiai is a relatively new area, still growing, only about 20 minutes from Sendai station on the Senzan line. At first even Japanese people didn't really know it, so when Sendai-ko, a Miyagi-based ramen chain, decided to locate a store here, they called it the Ayashi branch. To find it, take the south exit at Rikuzen-Ochiai station, keep the station at your back, and within ten minutes you'll find it on the left, set back from the road, not far after Hotto Motto.

Sendai-ko has been serving ramen since 1976. Their distinct, big, orange billboard signs can be found several areas throughout the city if you keep an eye open. Now they have about a dozen stores, most of which are in Sendai. Each store uses the same ramen base, but they vary the amount of other ingredients slightly, so each restaurant has a familiar, but unique taste.

The first thing that I noticed about the store was the mouth-watering smell, which came floating out to meet me before I'd even set foot inside. Then, after a brief battle with a slightly broken touch-to-open door, I was greeted by a member of staff and shown to a seat. If you're eating alone, you get a little booth, with the basket typical of Japanese restaurants for putting your bag and other belongings into.

The menu is fairly simple, with 5 main options of ramen (there was also what appeared to be specials, one on the reverse of the menu, and another on the wall). The Ayashi branch I dined at is the only restaurant in the chain that offers salt-based ramen. Every bowl of ramen comes with a free bowl of rice, if you want it. You can also order extra toppings and sides of gyoza or meat. The menu is only in Japanese, but it comes with pictures, so pointing is an option.

I ordered the Sendai-ko ramen, but declined the rice, expecting the enormous amount of ramen that I've been faced with before. As it turned out, the amount was more modest, so I ended up ordering some gyoza as well.

The ramen had a rich soup, which was still tasty after it cooled. The slice of meat just melted in my mouth, and the fairly giant squares of dried seaweed were both crunchy and chewy. The more adventurous diner can add some spice to their dish, either using the chili oil (which I'd seen before) or a sort of chili paste (which I hadn't).

Although the ramen was good, unfortunately the gyoza (dumplings) were less appealing – I couldn't tell if they'd been boiled or fried, because they were slightly burnt but chewy, not crisp. Tasting them, the flavor was lacking.

It might be that the gyoza left me feeling disappointed, but I feel that something was lacking at Sendai-ko. The restaurant's atmosphere left me wanting the brief camaraderie of eating elbow-to-elbow with strangers, perched on stools, and I missed the more personal touch of the smaller ramen stores that are not scarce in the Ochiai area. Given the price, I was expecting something a bit more satisfying, although I can't complain about the quality of the ramen.

I would recommend coming here if you want decent ramen, but can't handle the giant bowls that seem to be common in most places. This store is open until 11pm but others close as early as 10pm and as late as 3am--great for grabbing some grub late at night. If you want a better selection, better atmosphere and more value for money, you would be better going to an independently-owned store. 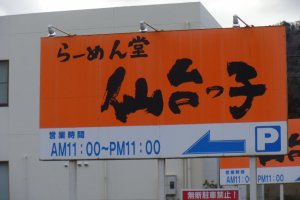 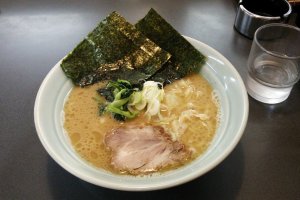 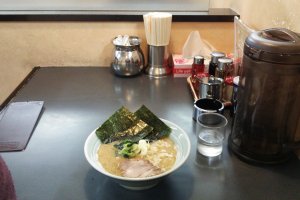