War and Peace In Nagano

A series of battles between two warring factions culminated in a final fiesta of bloodshed at Kawanakajima, Nagano, in 1561. Kawanakajima was then a rich granary, situated in a fertile plain. It was also a strategic meeting point of roads, and thus a prize worth fighting for. Today it is a crumble of ruins salvaged from the battle, a peaceful park where children romp around man made hillocks, with a lake and a paradise of mountain and farm walking trails. It is war and peace. A modern day Peace Marker “Let Peace Prevail On Earth” is evident.

The remnant relics from the battle bring to life the derring-do and heroic valor of the two main players, Uesugi Kenshin and Takeda Shingen. Their two large statues capture forever in time one thrilling event of the battle. Apparently Shingen was having a quiet moment on a stool when who else but Kenshin suddenly burst in and thrust at him. Shingen beat him off with a wooden war fan. Mitachi Nanatachi, or "Three Strikes-Seven Marks” became the name of this monument.

Only two burial mounds where both sides rest remain. I felt some pathos in their solitary silence. I felt this actually for the whole place. Once the scene of a battle regarded as one of the largest and bloodiest in Japanese history, now all is deathly quiet and peaceful.

A single boulder, the Rock of Regret, is so named because a soldier threw his spear at the attacking Kenshin to protect Shingen. He missed, but it was enough to scare Kenshin off. The soldier, however, was so full of regret or frustration that he stabbed his spear into that very rock. Shingen seems to me to have had nine lives, like a cat.

Two trees from those days have been conserved. Shingen used native enju trees to fortify his headquarters by driving them into the ground with their roots in the air. Named the Upside Down Enju Trees, they have survived through the several hundreds of years that has passed. I have seen the species in a few other temples in Nagano.

There’s also a bit of poetry in that battle. Both sides employed highly sophisticated and complex battle strategies and formations called Operation Woodpecker, Crane’s Wing, and Winding Wheel. The Battle is so admired that an annual re-enactment for men and women takes place in Yamanashi.

So what was once a battle ground is now a serene environment, enhanced by the presence of tiny shrinelets, and a main shrine, Tenkyuji, where people still pray. Adjacent is the rambling mountain walk through farmlands where the troops once marched. The track goes on interminably. You can deviate from the track into small town roads, with a couple of interesting sights, memorial plaques and rocks.

Nagano City Museum is within the park, but I skipped it since I was reliving history all around me.

Take #30 bus from Bus Stop Three directly outside Nagano Station. Bus schedules are at the bus stop, or available from Tourist Information. Have ready Y470 for a one way ride of about 25 minutes. 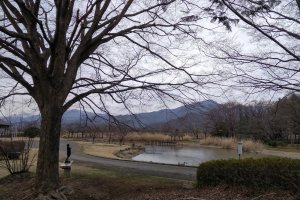 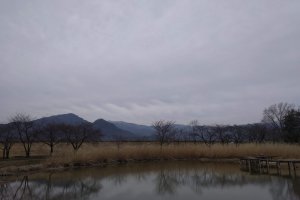 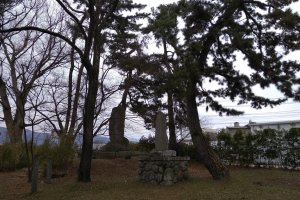 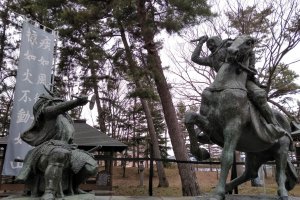 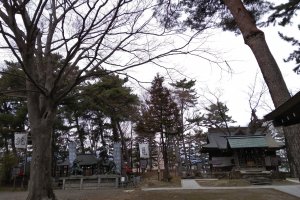