A look at this mountain temple to the God of War

Japan has many world renowned mountain temples. However, one of the most important also happens to be one of the most overlooked. Situated on Mount Shigi in Nara, the Buddhist temple Chogosonshi-ji was instrumental in the story of how Buddhism was allowed to flourish in Japan.

For this story, we have to go back over 1,000 years to the Asuka Period when two powerful clans were battling over the fate of a school of Buddhism which had recently arrived from China. The Soga Clan were keen to see Buddhism take root whereas the Mononobe Clan were staunchly in favour of Shinto being the only faith.

The conflict was going poorly for the Soga who had been pushed back to Mount Shigi in western Nara Prefecture. Here, the semi-legendary Prince Shotoku Taishi offered a prayer to Bishamonten, Buddhist god of war, and fashioned a crown depicting the Four Heavenly Kings out of a sacred tree.

If victorious, he and Soga-no-Umako, head of the Soga, vowed to build a temple to the Four Heavenly Kings. At the hour of the tiger, on the day of the tiger, in the year of the tiger, a bright light seen in the sky was taken to be a blessing and with renewed fervour, utterly defeated the Mononobe. With the Mononobe clan leader dead and the line ended, the two went on to build Shitenno-ji Temple, Japan's oldest officially administered temple.

Nowadays, the Chogosonshi-ji Temple complex - nicknamed Shigisan - occupies the slopes of Mount Shigi. As you arrive, first thing you notice is the world's largest papier-mache tiger, a large nodding beast at the beginning of the temple approach. There is also a nice view of the temple's main hall on the hillside above.

The tiger motif is common around the precincts of Mount Shigi since Prince Shotoku is said to have made his prayer to the god of war at the hour of the tiger on the day of the tiger in the year of the tiger. Further along the path is a tiger shaped tunnel. Passing through is supposed to bring good luck and halfway through it there is a special place for hanging ema prayer tablets.

A copper-coated torii gate, green with age, marks the entrance to a small courtyard and the steps to the main hall. The hall is surrounded by a balcony with splendid views of the Plains of Yamato, a large, flat area of Nara where Emperor Jimmu is said to have established the first kingdom of Japan. You can enter the main hall to purchase various charms and to have your Goshuincho temple stamp book stamped.

Chogosonshi-ji also offers three uncommon types of blessing; a path through a pitch-black tunnel to grant a wish, a miniature version of the 88 Shikoku Temple pilgrimage and a particularly noisy prayer conducted in the centre of the main hall to invoke the god of war himself to protect your home.

There are a handful of other temples, some of which offer overnight lodging, for which enquiries can be made through their website. There is also a small cafe which offers tea and sweets and in winter, a delicious zensai, hot soup made with sweet red azuki beans and mochi. Just outside of the cafe, you might see Yamabushi ascetic mountain priests performing ceremonies of their own.

If you have the stamina, you can also take a short but steep hike to the summit. Make sure to pick up a special container of water first as a special offering for a small shrine that sits at the top. Mount Shigi used to be home to a great many snakes believed to have lived here because a great dragon also made the mountain top its home. This shrine, Kuhatsu-Goho is dedicated to the dragon as a spirit of water.

Mount Shigi was also the site of Shigisan Castle. Expanded in the 17th century by Hisahide Matsunaga, a master of arts like the tea ceremony, the castle was besieged by Oda Nobunaga. During the siege, Hisahide threw his prized tea bowl off the mountain—so that his rival couldn't claim it—and then committed ritual suicide. His son then removed his father's head and jumped off the mountain with it so that it too could not be claimed. Afterwards, Nobunaga had the castle burned to the ground....

Finally, Mount Shigi is also home to the Shigisan Engi Emaki. This is a collection of three ancient and slightly amusing picture scrolls showing tales from the life of Myoren, a famous monk who once lived on the mountain. These stunning scrolls are incredibly fragile, and as such are not on public display but the stories they tell are an important part of Heian Period history.

The Chogosonshi-ji Temple complex boasts a fascinatingly rich history, stunning views and is most certainly well worth a visit.

From Osaka, take the JR Yamatoji Line from Tenno-ji to Sango Station followed by a 10 minute bus ride. 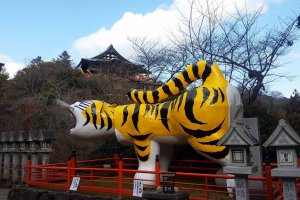 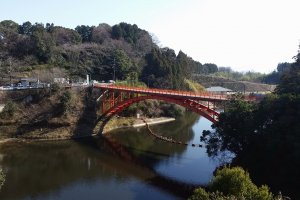 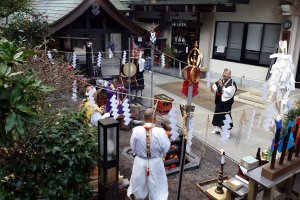 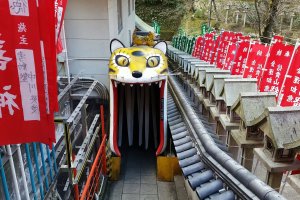 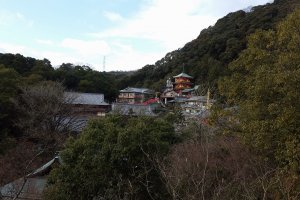 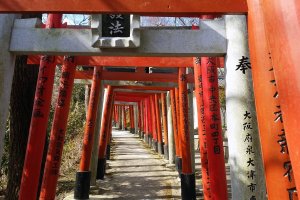 デロン 2 years ago
I really enjoyed this article. I can't believe the son jumped from the cliff with his head! That's crazy.

Gary Luscombe Author 2 years ago
Thanks! Warlords would sometimes go to great lengths to "protect" their heads, better it be destroyed utterly than sit on a spike!
Reply

デロン 2 years ago
Hey, you know what! I agree haha. You will die with some integrity for sure.
Reply

Elena Lisina 2 years ago
The figure of a tiger is really unique - so big and colorful! And tiger tunnel!!!
Reply Show all 2 replies

Gary Luscombe Author 2 years ago
They have a few smaller tiger statues nearby which are great for taking pictures with the kids, but I didn't have any that were not family photos so couldn't include them.
Reply

Sherilyn Siy 2 years ago
Hisahide threw his prized tea bowl off the mountain so that his rival couldn't claim it -- that this detail is remembered in historical records is remarkable.
Reply Show all 1 replies

Gary Luscombe Author 2 years ago
I think there is an element of drama in there. Hisahide is always painted as being very ugly, almost ogrelike.

However, when he knew the siege of Shigisan Castle was lost, he ordered that his head be destroyed so it couldn't be claimed and then committed seppuku. His eldest son took his fathers head, put a sword through his own throat and then jumped from the mountain. Pretty heavy stuff!
Reply

Kim 2 years ago
I love random facts like this temple being home to the world's largest papier mache tiger! Very neat!
Reply Show all 3 replies

Bonson Lam 2 years ago
This is really bigger than life and makes it stand out from other temples. It reminds me of the giant lion/ dragon statue in Osaka. https://en.japantravel.com/osaka/namba-yasaka-shrine/22279
Reply

Gary Luscombe Author 2 years ago
Namba Yasaka Shrine is an interesting place to see, but it always reminds me of a ghost train ride from a funfair!
Reply

Sander van Werkhoven 2 years ago
Very interesting! Such a rich history and yet I don't think I've ever seen anything about this temple before.

The tiger tunnel reminds me somewhat of a pagoda at the Lotus Lake in Kaohsiung, Taiwan. There however it is said to change bad luck into good luck by entering the temple through a dragon's mouth, and leaving it from the tiger's mouth: https://www.youtube.com/watch?v=PDdLQQR4QD0
Reply Show all 1 replies

Gary Luscombe Author 2 years ago
Although it's quite a big and very important temple complex, it always gets overshadowed by Yoshino and Koyasan. I visit at least once per year with my family as we take part in the Bishamonten blessing to renew the charms in our entrance hall.

They do receive a few foreign guests per year and I have been helping them with their English pamphlets but it is just that little bit difficult to get to that tends to put most people off going; a pity.
Reply
17 comments in total