What is Kanzuri fermented chili paste? 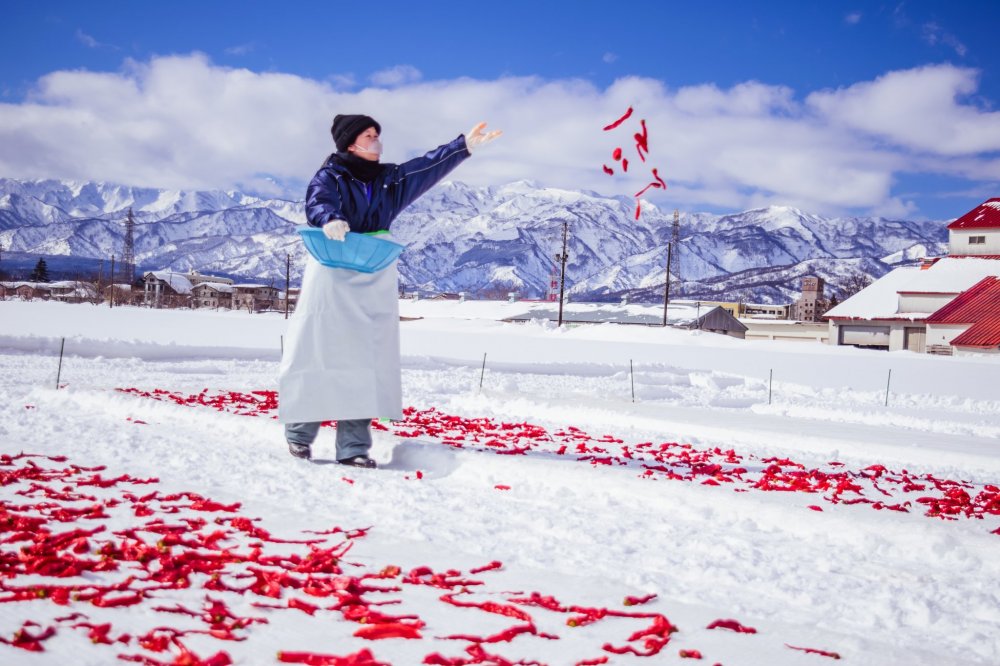 Kanzuri is made only in Myoko, Niigata Prefecture. 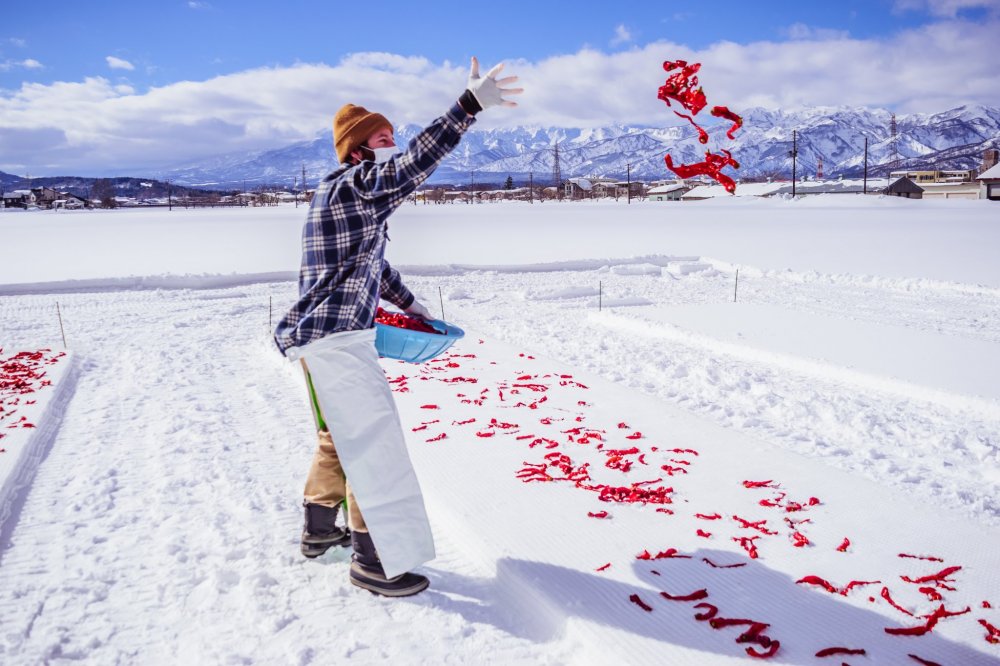 Visitors can also take part in spreading the chillies on the snow. 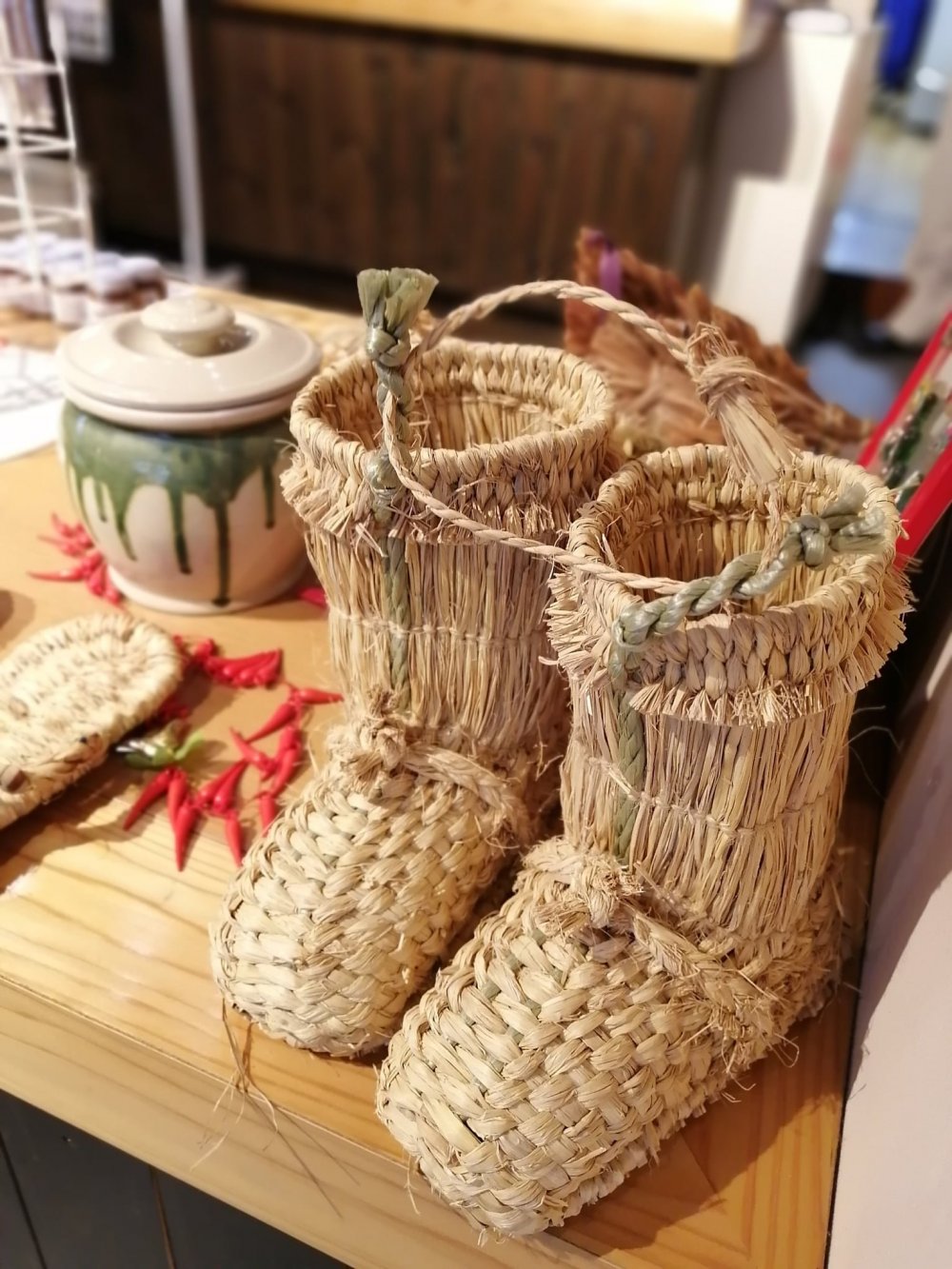 The shop is also has some traditional artefacts to look at. 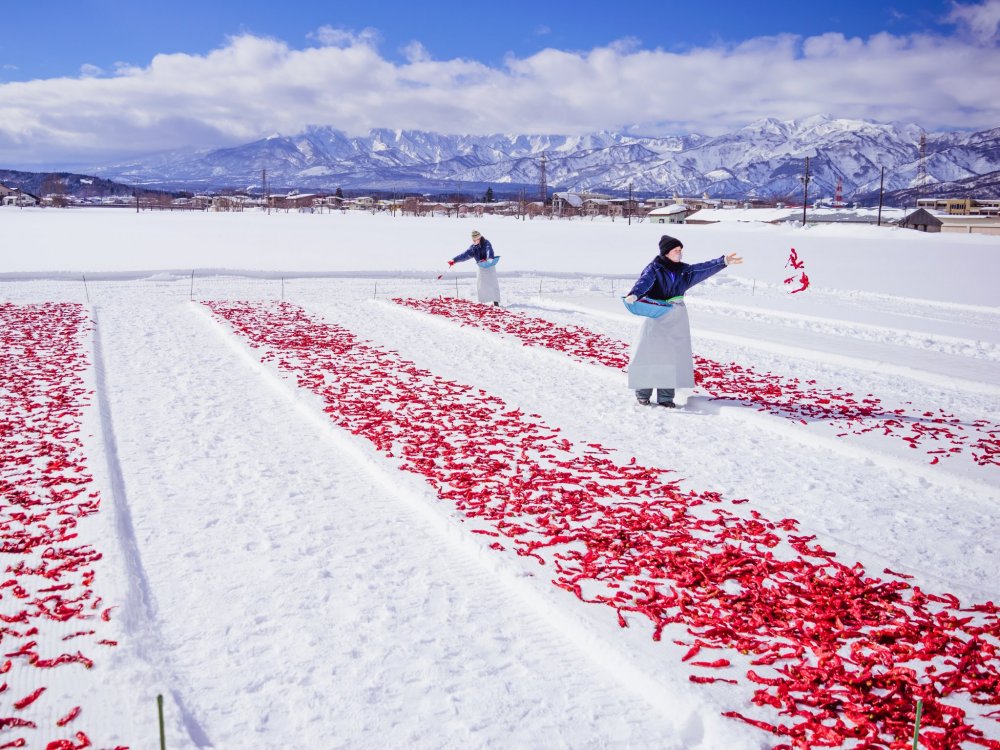 Ladies spreading the chillies out on the snow 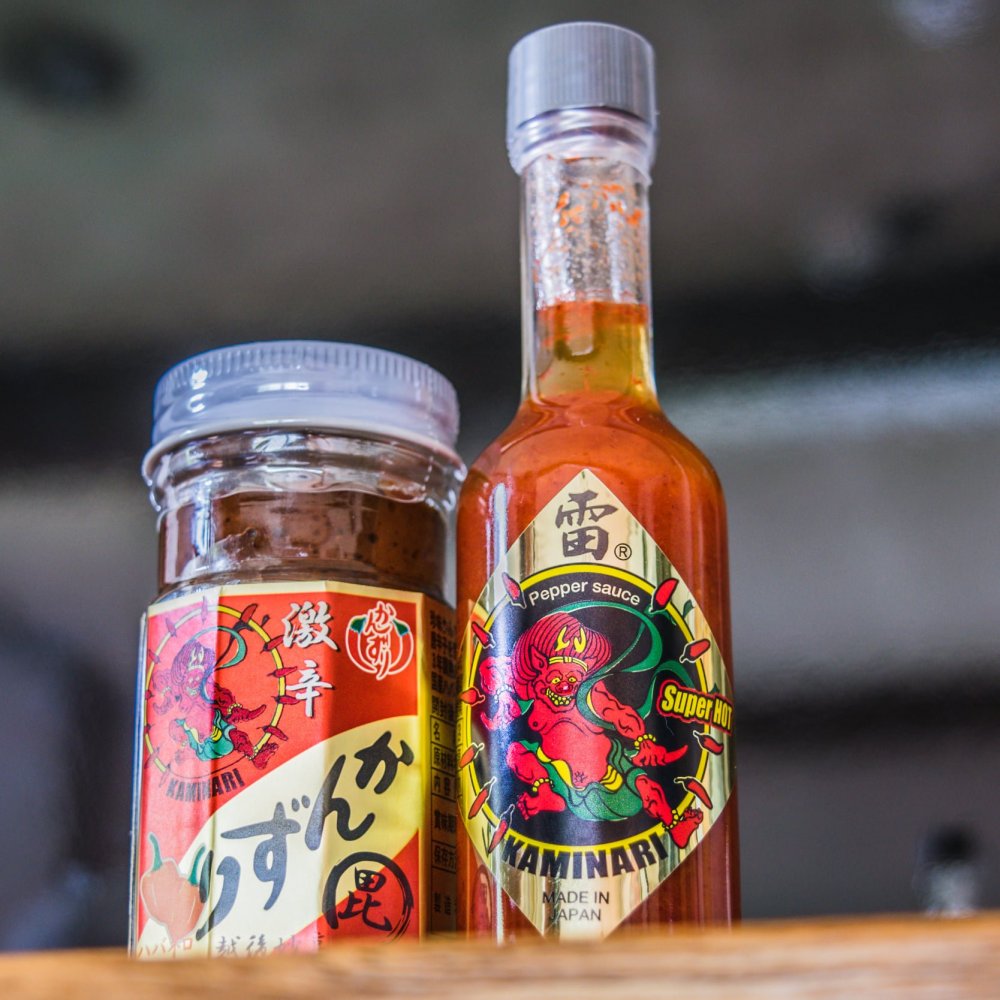 Kanzuri have a variety of chilli products including pastes and hot sauces. 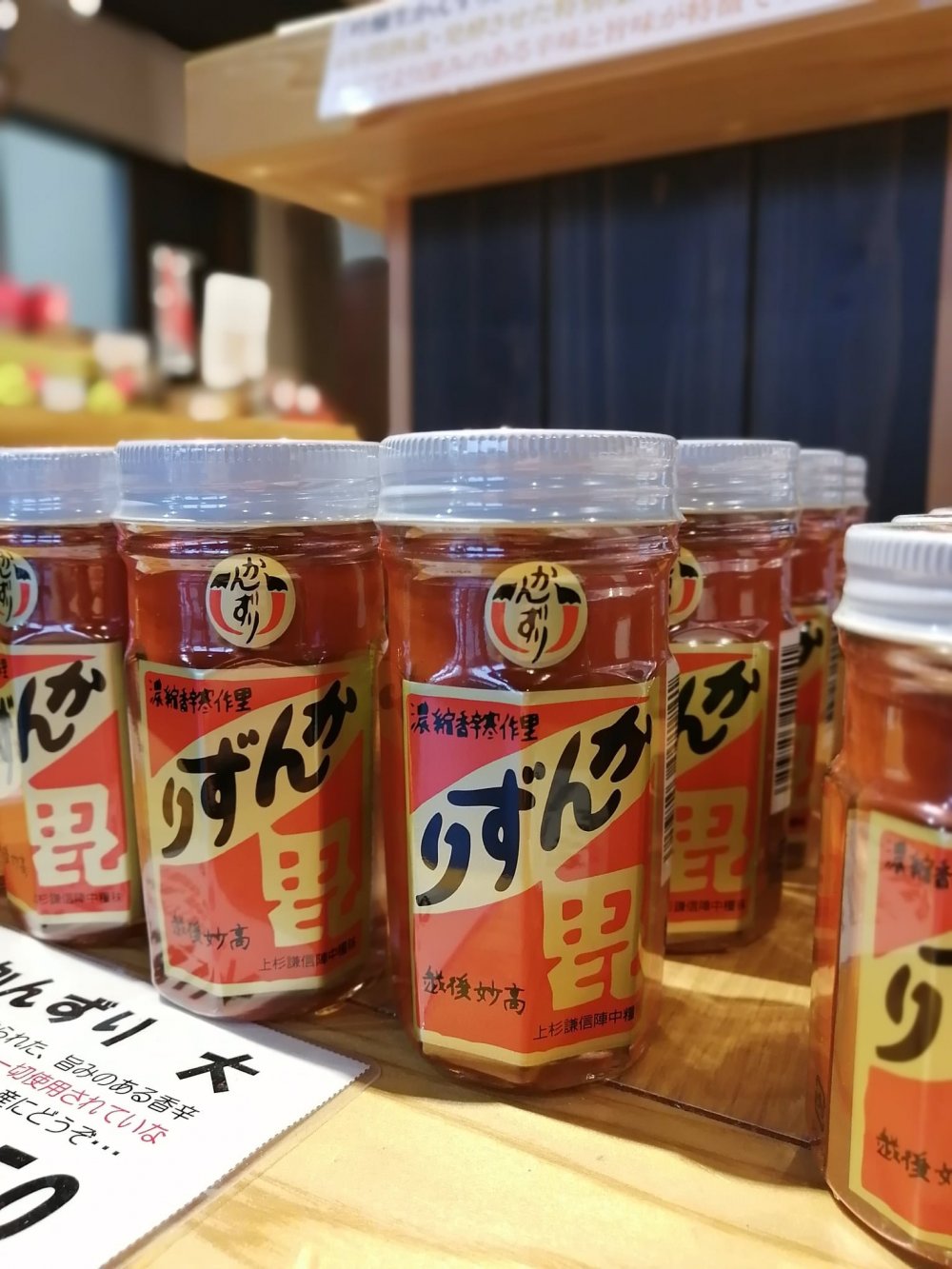 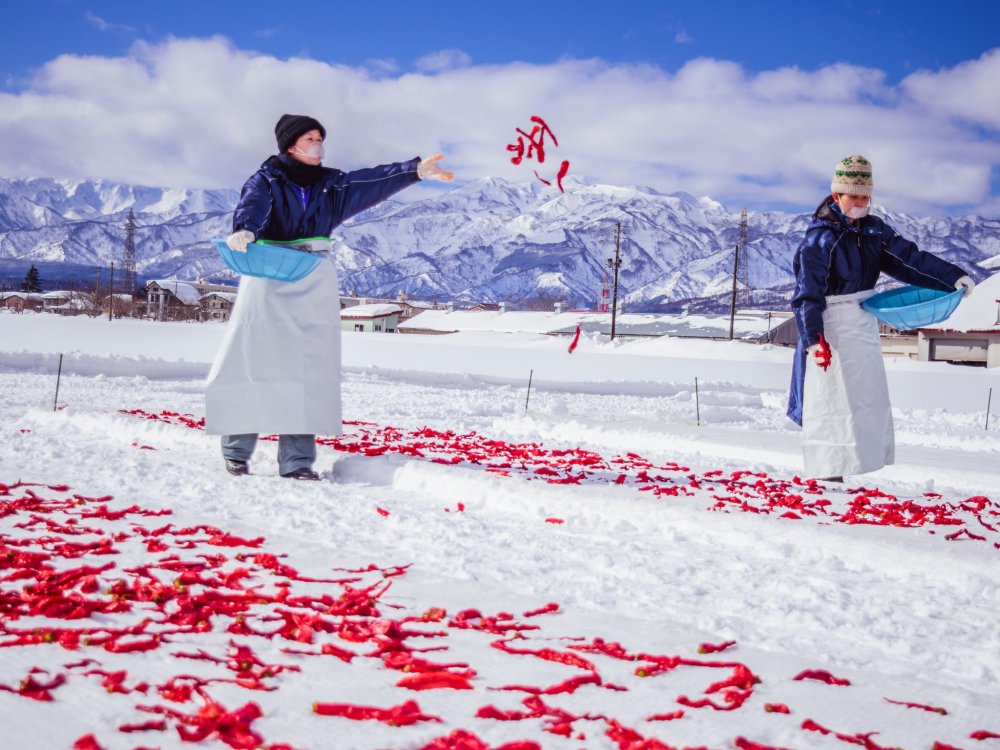 Spreading the chillies on the snow increases the sweetness of Kanzuri. 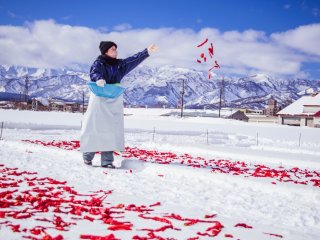 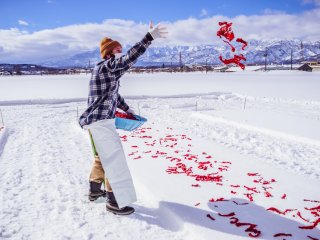 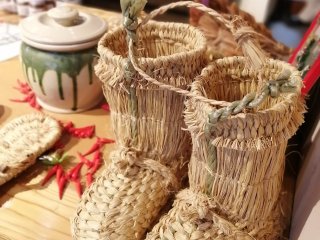 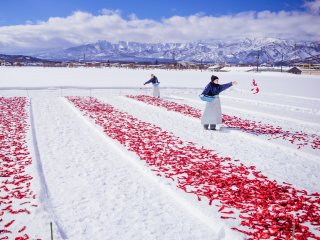 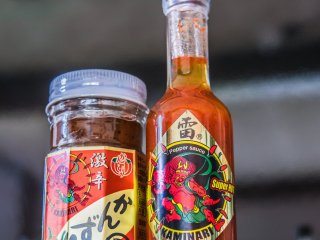 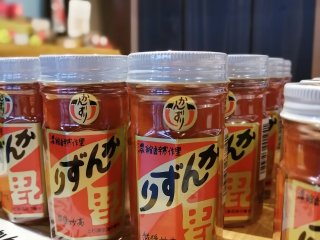 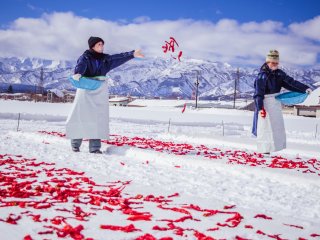 Kanzuri is a fermented chilli paste (or even hot sauce) made in Myoko, Niigata Prefecture, using chillies, yuzu and koji. Kanzuri is unique in that, although one or two similar products do exist, the others are not fermented for as long; anywhere between three and six years.

All chillies used are grown locally and harvested during the summer months. They are then marinated in salt throughout autumn before being thrown out on the snow sometime during January. They are left on the snow for three or four days. The snow is said to draw out any bitterness thereby increasing sweetness in the final product.

Have a go at yukisarashi

If you're lucky enough to be in town at the time you can go and watch the ladies spread the chillies around, known as "yukisarashi". Visitors can even have a go at throwing the chillies too! Either way, the smell alone is enough to make you salivate your way to the gift shop.

The paste goes very well with Japan's traditional winter dish, "nabe", and a host of other things including yakitori, while one of the "Kaminari" (thunder) hot sauces puts the fire into tacos but is definitely not for those uninitiated with hot sauces. If you like spicy food but don't want your brain exploded, start with the regular paste or perhaps even the habanero paste.

If you don't make it to see the chillies being spread out on the snow (during 2021, this took place over a few days around the 20th of January) you will still see Kanzuri in most omiyage shops in the Myoko area.

Myoko is Kanzuri, Sake and Snow

Just as Kanzuri derives its uniqueness from its relationship with snow, so too do two of Myoko's other main drawcards; sake and winter sports. Myoko and Niigata Prefecture, in general, are proud of their "nihonshu" which is crafted with food pairing in mind. While each prefecture in Japan has its own philosophy when it comes to crafting sake, Niigata's pure snowmelt waters are perfect for creating subtle yet flavourful nihonshu while some other prefectures will have bolder flavours. If you're looking for something to pair with a Kanzuri dish, you might like to consider a "namazake" (raw sake) or "nigori" (cloudy).

Of course, perhaps even more entrenched in modern-day Myoko is skiing, snowboarding and other winter pursuits. Myoko Kogen receives an amazing amount of snow averaging much more than most places on Earth with 15 metres per year!

Among the many attractions of the Myoko area, with snow at the heart of most, Kanzuri is perhaps the most memorable for those in search of Japanese food with a unique twist.

Kanzuri is in Myoko, Niigata Prefecture about a 15-minute walk from Arai Station which can be reached via the Myoko-Haneuma Line from JR Joetsumyoko Shinkansen Station in around 25 minutes. Alternatively, Kanzuri is either a 10 or 15-minute drive from Joetsumyoko Station or around 1 hour from Nagano Station.

Owner of Myoko House lodge and gyoza/sake bar in the powder snow heaven of Myoko Kogen, Niigata Prefecture, I'm keen on writing and photographing not just the Myoko area, but Japan as a whole, and look forward to an endless journey of discovery in Japan. Beyond the winter sports industry, I'm particularly interested in learning all there is to know about sake.

Bonson Lam a year ago
Chillies, yuzu and koji is a great combination, and sounds healthy too. I learn something new everyday here at Japan Travel.
Reply Show all 0 replies

Kim a year ago
Incredible photos! Loved learning about this!
Reply Show all 0 replies

Elena Lisina a year ago
Interesting! I've never heard of such a technology, and I bet snow there is very clean! :)
Reply Show all 0 replies
3 comments in total

Bonson Lam a year ago
Chillies, yuzu and koji is a great combination, and sounds healthy too. I learn something new everyday here at Japan Travel.
Reply Show all 0 replies

Kim a year ago
Incredible photos! Loved learning about this!
Reply Show all 0 replies

Elena Lisina a year ago
Interesting! I've never heard of such a technology, and I bet snow there is very clean! :)
Reply Show all 0 replies
3 comments in total