The Kumano Reliefs of Kunizaki

I don’t recall when I first became enamored of the shape and beauty of stone, but it hasn’t been too many years since my love of things lithic morphed into a fascination with images carved upon natural rock surfaces. I’m referring specifically to Japan’s stone reliefs, images of Buddhist deities etched into cliffs or hollowed rock outcroppings. These immovable renderings are referred to as magaibutsu, in contradistinction to free-standing stone Buddhas, commonly called sekibutsu.

The land of old reliefs

Natural rock reliefs are found throughout Japan, the most famous being those at Usuki, in southern Oita prefecture, and it is in this region of the country that one finds many of the finest old magaibutsu. When I say “old” I am referring to works of the late Heian (794–1185) or early Kamakura (1185­­–1333) times, the beginning of long centuries of feudalism, when common Japanese folk began to seek refuge in the Buddhist faith from war, calamity and uncertainty.

A fascinating relic in a lovely setting

While there is much speculation about the reasons for the preponderance of reliefs in Oita prefecture, here I’d like to draw your attention to just one impressive work, one of the largest and oldest in Japan, which is located in the northern part of this scenic prefecture. It is the famous Kumano magaibutsu, on the rural Kunizaki peninsula. For anyone smitten with an interest in such relics, this one is a “must see.”

An old face, a short story

The Kumano site is actually two large faces carved into a high rock precipice, accessible only after ascending many hundreds of stone steps from the parking lot of Taizou-ji temple. Though very little is known about why or by who most of the old reliefs were commissioned, about this one the temple history clearly states: “A monk went up to Kishu to receive the authorization of Kumano (to carve the image), and upon returning completed the work in four or five years”. The work referred to is the eight-meter tall, sword-brandishing Immovable One (Fudou Myo-ou); the other image, the face of the Dainichi Buddha, was carved an estimated one to two hundred years later.

An expression of a faith uniquely Japanese

Perhaps at this point you are asking “so what?” Well, not only is this relic designated a Significant Cultural Asset of Japan, with a distinct connection to the ancient Kumano tradition, it is also located in a serene glade, high up in an old-growth forest, offering a lovely spot for meditation. Moreover, it is historically associated with nearby Usa Hachiman-gu Shrine, which was burned down in the last years of the Gempei War (1190-1195), just around the time the carving was initiated, and is located at Taizou-ji Temple, where Japan’s native Shugendo faith, which combines the spiritualism of Shinto with the core tenets of Buddhism, is still practiced today.

A timeless vision in stone

That’s a lot to think about, I know, and then there’s this: while viewed straight on, the expression on the Immovable One’s face is a seemingly impossible curl of the lips, though it is clearly a smirk of resignation, or even of disdain. Yet when viewed sidelong, from the final stone steps leading up to the shrine above, it is something quite different. From this vantage, the wise King wears a gentle smile of patience and understanding.

What a fine labor of love that monk left for future generations to ponder and enjoy!

Oita Tourist Bureau can give you info on getting there, and I am pretty sure a bus runs from Beppu Station to Taizou-ji most days. (No English is provided). The Tourist Bureau website is: http://en.visit-oita.jp/spots/detail/4792 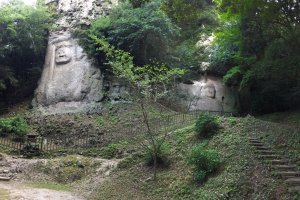 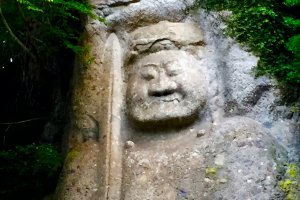 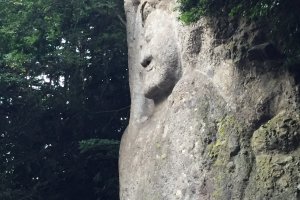