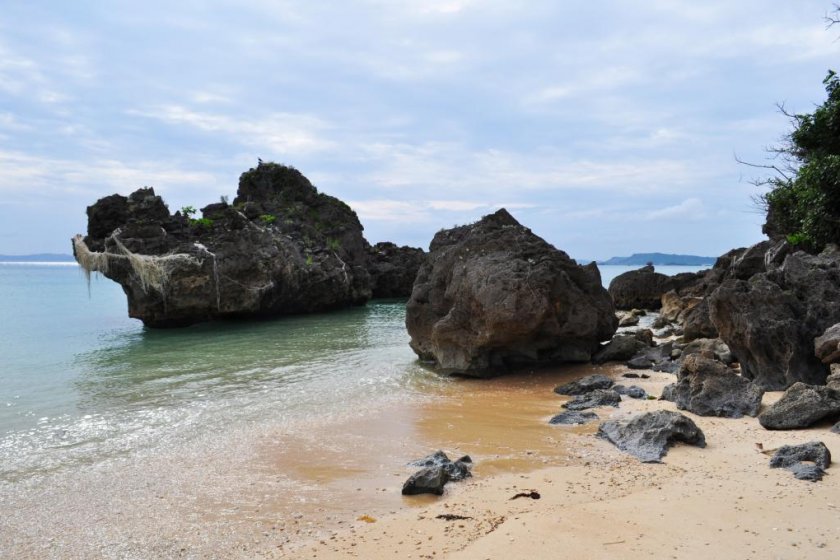 A tropical paradise complete with soft sand, clear water and a rock to jump off into the water. (Photo: Michelle Madden)

Tsukenjima is a small island that is situated just thirty minutes by ferry from the main island. I had the opportunity to travel to Okinawa with some friends during the start of the rainy season in June. Before leaving I had many people telling me that it was not the ideal time to travel there due to the rain but I decided to go anyway. Despite miserable predictions for a one hundred per cent chance of rain for the weekend, the weather turned out to be lovely and humid. I think it may have rained briefly on the second day but in that all-encompassing heat the rain was certainly welcome. As expected there weren’t many tourists in Okinawa during the off-season, the islands felt abandoned. On arrival in Naha we took a taxi to Heshikiya Port in the Katsuren Peninsula, if you are traveling with more than two people this works out cheaper. If you are traveling with less than that I think taking the bus may be best. While waiting at Heshikiya Port we organised our accommodation with the help of the ladies in the tourism office. We found a place to stay for the night for only four thousand yen including dinner and breakfast.

Arriving in Tsukenjima was not as glamorous as we had imagined. All around the port there was heavy construction going on, although I’m not sure what it was all for. On arrival we called our hosts to pick us up and went to drop off our bags. Having seen the construction at the port, we were eager to move away from there and to find a beach instead. We walked down to the port again to rent some bicycles to go exploring with. We were charged a really low fee and got to keep the bicycles until the following day. Exploring the island on a bicycle was definitely one of the highlights. Once we moved away from the construction at the port we saw how beautiful the rest of the island was.

We cycled past beautiful white sand beaches with crystal clear water, narrow paths filled with butterflies and small vegetable farms being tended to by the locals. The entire Island can be cycled around in ten minutes. The size of the island makes it ideal for a one or two night stay before heading out to another island. During our two-day stay I think we were the only tourists on the island which made it quite special. We had the entire beach to ourselves, swimming in the warm water and finding some starfish as well as interesting rock formations.

On the island there are only two or three cafes and a soba restaurant that we could find. If you intend staying over for a night, finding accommodation with meals included is the best option. We were absolutely spoilt with home cooked Okinawan food that included deep fried fish, fresh vegetables, rice, miso soup and pork. The minshuku (traditional Japanese bed and breakfast) was run by a kind elderly lady who had spent many years on the island.

On the second day we decided to take one more swim in the ocean and a quick bike ride before heading back to the main island. It was a wonderful getaway and so convenient to get to. I would recommend this to anyone traveling to Okinawa. 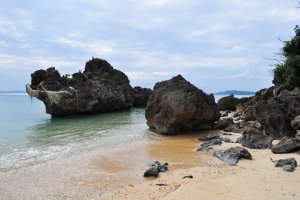 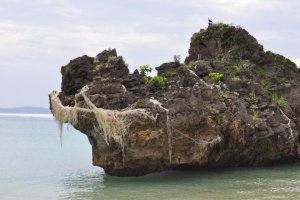 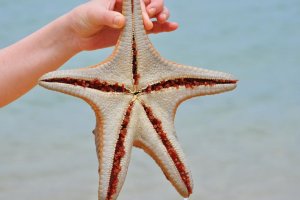 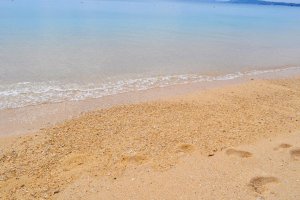 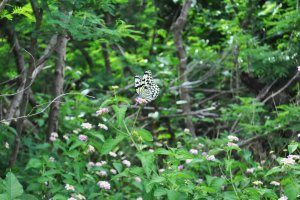 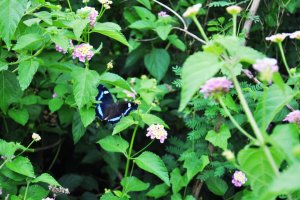 Victoria Vlisides 6 years ago
Awesome star fish photo! This makes me miss Okinawa so much.
Reply Show all 0 replies
1 comment in total