A knife is not a knife! While most of us nowadays like knives made of stainless steel, professionals in the Japanese gourmet world prefer carbon steel knives from Sakai.

The blade you see actually consists of two layers forged into one: a softer jigane iron with almost no carbon content and a hard hagane steel with 1 percent carbon. The former will be the body of the blade while the later will become the cutting edge of the blade.

The hammering process is extremely important for the making of a strong and sharp knife. You might remember a scene from a samurai movie where a blacksmith crafts a Japanese sword by hammering. Now, Sakai knives are made the same way, still today.

Actually there are many successive stages in the process of forging and completing a knife. Typically the Sakai master craftsmen picked up the craft from a young age from their fathers and grandfathers, and they pass on this craft to their children.

75 families are members of the Sakai blade-making guild. Their workshops are located in a local neighborhood in the “old” part of Sakai, which is the stretch of city between the ocean and the Hanshin Highway that runs atop what used to be a canal.

Let’s meet two Sakai master craftsmen (please note that you need to make an appointment at Sakai Hamono if you want to visit their workshops and see some knife-making action!):

Ikeda Yoshikazu stands in front of an open furnace at his small workshop and he keeps checking a piece of steel starting to gleam in a fiery orange-red color. It is 1,000 degrees in this furnace and he wants the piece of steel that he holds in on long tongs to be 700 to 800 degrees hot. Looking at the color of the steel, he knows exactly when the time has come. He quickly takes the red-hot piece of steel out of the oven and starts welding the hagane and jigane into one piece.

This is followed by hammering. This process of hammering, heating, hammering is repeated several times to create the rough shape of a knife. Inbetween the steel is quenched in water, which hardens the hagane. In the end Ikeda puts the rough knife into cold ash by the furnace to let it cool down slowly.

His workshop is small and crammed full with tools and knives in the making. The space behind the furnace just fits one person. Even in winter it is boiling hot in the room. A shimenawa, a plaited rope made of rice straw with white zigzag papers attached, which is usually found at Japanese Shinto Shrines marking sacred space, hangs above the furnace.

In winter Ikeda would work three hours in the mornings and four hours in the afternoon. In summer, however, he can only work 30 minutes a time before taking a break. Depending on the size and quality of the knives to be made, he forges 20 kitchen knives a day. In case of higher quality knives, it will only be five a day.

Next door of the workshop is a small sales room run by Ikeda’s cousin. The selling of knives is done by tonya (sellers), the third function, after forging and sharpening, of the Sakai knife industry.

Moving on and passing through local neighborhood we come to the workshop of another master craftsman who is a knife sharpener. When Morimoto gets the knives from Ikeda and other forgers, the knife still looks black and the edges are dull. It is Morimoto’s shop to make them shiny and super sharp.

Morimoto Koichi workshop is equally small and there are many machines with whetstones lined up along the wall. There are some flat whetstones and some rotating whetstones and these whetstones have different surfaces, which produce different levels of coarseness on the steel.

He uses them one after another, and switches between them, to sharpen the raw knives that he gets from the forgers gradually. There are four major steps, and many steps inbetween consisting of polishing and straightening. With each step the blade become shinier and sharper.

During this process of grinding and sharpening, some distortions will appear on the blade, which have to be removed immediately. This is important to get perfectly straight blades. Straight means sharp. Any distortions not corrected will affect the sharpness of the blade negatively. Morimoto stops the process of grinding and sharpening to check for these distortions. When he finds some, he hammers them out before he continues the sharpening.

It looks quite scary when Morimoto holds the knife against the rotating whetstone wheel. His hand seems to close to the rotating machine and the sparks fly. He explains that the right angle and high levels of concentration are necessary. From time to time he puts the already very sharp-looking blade to the back of his head. Wondering why and asking him about it, Morimoto explains that he is checking the sharpness on his hair. If the blade is razor-sharp, cutting hair easily, his work is done.

Like Ikeda, Morimoto handles about 20 blades a day, depending on the size and qualify of knife to produce. This reminds us that this is not a factory-made knife but crafted by hand in a slow and careful process that has been perfected over centuries. They both assure me that there are “many secrets” to produce the perfect Sakai traditional blade passed on over generations of master craftsmen.

Owning and using such a knife requires extra care. For example, you have to wipe of moisture after washing the knife, you should use the knife only for its dedicated cutting purpose, you sharpen it regularly and only with water stones etc.

Sakai knives are hand-made to order, but you can also purchase already made knives at the Sakai Hamono Museum or at the showrooms of the craftsmen.

Since the final output of a Sakai traditional blade is “team- work”, the blacksmiths’ names are not engraved on Sakai’s blades. Instead, all Sakai blades carry the inscription “Sakai Hamono”.

In any case you can be assured of its quality because at least “three pairs of eyes” (forger, sharpener, seller) have eyed the blade closely from when it was born from raw steel to its attractive shiny and sharp final state, ready for you to come and take it home. 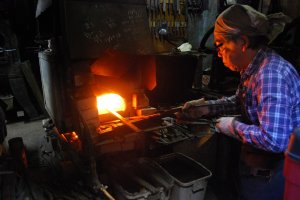 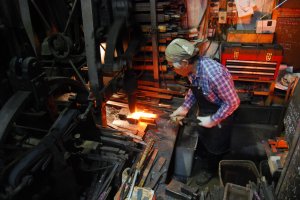 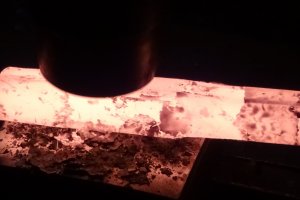 Bonson Lam 2 years ago
I had the opportunity to be on a guided tour of the museum as well as joining local masters in a knife sharpening class. Everything was well explained, for the idea that sharpening is creating a more "jagged" edge, to stories on how different parts of Japan use different knives to prepare unagi or eel dinners. I definitely agree that pre-planning with the museum or the tourism office pays dividends in being able to join one of these classes.
Reply Show all 0 replies

Guillaume Doré 5 years ago
I found this article interesting and is was one of the reason why I went to Sakai. However, I feel that it is somehow deceptive. The address given in this article is actually the Sakai City Crafts Museum, where there is no forging or sharpening (except of sharpening demonstration day).
The article would have been better if it was saying where the pictures have been taken and explain how to see craftmens in action. Even if I found places where they make knives, most were behind closed doors or only had a small display of knives in the front of the workshop. You could only (sometimes) hear the sound of hamering or grinding when passing in front of them. There is only one place where I could see someone heating a piece of metal at the back of the workshop, but I did not want to bug people in the middle of their work.
So if you do not have arrangements, do not expect to see any work being done during a visit to sakai.
Reply Show all 0 replies
2 comments in total