Dear Cup is a beautiful café located in one of the oldest areas in Japan, Osaka, Sakai City. Sakai boasts the legendary tomb of Emperor Nintoku, a 4th century Japanese Emperor, believed to be the 16th Japanese Emperor, known as Kofun. But besides all the ancient history and cultural relics that Sakai possesses it also has Dear Cup. Why do I put Dear Cup on such standing? The reason is that it’s a great spot to relax and enjoy great coffee, sandwiches, and pastry all while supporting a cool family owned establishment.

Sakai is located in South Osaka, an area heavily accented with the Osaka dialect and Osaka character, namely friendly and outgoing people. Dear Cup is the family business of the Nakata family. They are people that love coffee, so much so that they purchased their own roaster and roast their own coffee, which they purchase directly from producers around the world. Dear Cup is the life long dream of one Tsukasa Nakata, who first desired a coffee house of his own, while in university in Kyoto. Though he worked in the traditional salary man role for years, he took up the hobby of roasting beans in his kitchen at home, much to the chagrin of his wife and future business partner. He would eventually leave his career and leave for Tokyo to study the art of gourmet coffee making.

Tsukasa-San, obviously did not fail because his coffee roasts, blends and creations are of the highest quality. You can regularly find him behind the roaster, in the front of the store, inspecting the process, all while customers take in the smell of freshly roasted beans. His son is also a member of the team and he bakes tarts and cakes, along with his mother, that they have trouble keeping in stock. Their recommendation is the Avocado Herb Chicken Sandwich, which is amazing, and the Almond Tart.

Although young, by Sakai standards, Dear Cup was started in 2009 by the Nakata family. What’s so special about this place is not merely the freshly roasted coffee, delicious sandwiches and tarts but also the relaxing atmosphere of Viennese coffeehouse mixed with Japanese aesthetic of simplicity. Small Bonzai regularly decorate the thick wooden tables and decorative and detailed china hold the various orders and condiments. It has a very earthy feel and the service never lacks attention. The Nakata family deserves your company and they will be pleased to have you. You might catch me there, as I often stop by for an espresso. It’s a good place to unwind after a day of sightseeing in Sakai.

I came to Japan, roughly two years ago. Since then I have been indulging in my areas of interest such as history, language architecture, personal stories and food. I am an avid writer and I hope to pass on some important information to anyone willing to listen. 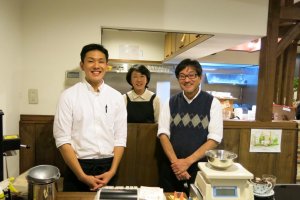 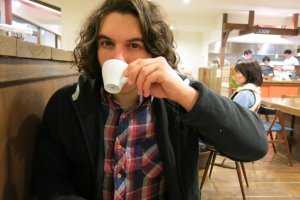 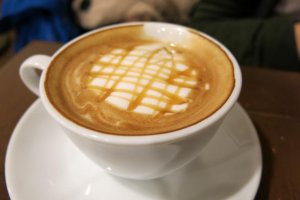