A tiny rural shrine whose story dates back 2,000 years

Kanii-jinja is a very small Shinto shrine in the village of Amami in southern Osaka. Despite its size, it has a significant history dating back over 2,000 years.

To learn its story, we have to go back to the dawn of civilization in Japan and the saga of Jimmu-Tenno, the first Emperor.

After landing his fleet on the coast of what would become Osaka Prefecture, he attempted to enter the plains of Yamato by crossing the mountains that separate Osaka and Nara Prefectures. However; as he was attacking in the direction of the sun, he offended his ancestor Amaterasu, the Sun Goddess. Blinded, his army was easily defeated by the barbarians.

Reeling from this defeat, and with his brother wounded by a poisoned arrow, the Emperor ordered his forces to march south, stopping several times as his brother’s condition worsened. One of the places they are thought to have made camp was an isolated, wooded hillside on the border of Osaka and Wakayama Prefectures, on the site where Kanii-jinja stands today.

From here, they made their way around the Izu Peninsula on foot and by boat before attacking the barbarians from the east. This time, with the sun at their back and Amaterasu on their side, they won a crushing victory and established the first Empire of Japan with a palace at Kashihara.

Kanii-jinja’s name translates as “Crab Shrine” which might seem unusual for somewhere so far inland. However; there are numerous small freshwater crabs that live in the waterways of Amami. At one point in history, a particularly impressive specimen was found in a brook near the shrine and presented to the Emperor (though which Emperor I cannot say).

The Shrine itself was founded several hundred years later and dedicated to Emperor Jimmu. While not quite so isolated now, it still retains an air of mystery and timelessness.

It sits on the side of a small hill directly over a section of the Nankai Koya Line, the railway line that links Namba with Mount Koya. The entrance can be easily missed as the stone torii gate is set back slightly from the narrow lane that winds up into the village of Shima-no-Tani.

The rough stone steps rise sharply passed a pair of Komainu guardian statues and through a gate into a small courtyard. The small shrine stands opposite the gate, surrounded by towering, ancient trees. Several of these trees are bound with shimenawa, sacred ropes made from rice straw. There are also several maple trees, making it a pretty, yet understated place to visit in Autumn.

A path out of the back of the shrine leads to a small glade that is sometimes used for forest bathing events. And if you look carefully, there is a difficult to spot trail that leads to another tiny shrine and extends off into the undergrowth.

Kanii-jinja serves as the main shrine for the surrounding little villages that make up Amami and is the focal point for several unusual, rural festivals throughout the year. The first, held on April 3rd (the date of Emperor Jimmu’s death) is a Mochimaki, or rice cake throwing festival.

The village elders and their invited guests throw armfuls of small mochi rice cakes into the waiting crowd. Everyone tries to catch or scoop up as many as they can to take home and eat. If you are lucky, you might also pick up a few with numbers which you can take to an official to claim some simple prizes.

The second, a harvest festival, takes place in October. This is a Chochin Mairi which is a type of lantern procession. From starting points within the three villages, men carrying paper lanterns on heavy wooden poles slowly converge on the shrine.

As they walk, they sing an ancient song in an Ise Ondo style; a kind of call and answer chant. The leader of each group sings a line followed by the rest of the group singing a chorus line.

Once at the shrine, they line their lanterns up while the Shinto priest begins to make prayers and offerings to the enshrined spirit of Emperor Jimmu. He then turns his attention to a large pot of boiling water bubbling away in a section protected by sacred branches placed into the ground.

To this water he ritually adds salt, water and rice then thrusts two tamagushi, sacred sakaki tree branches, into the mixture. Then, quite without warning, he swings the tamagushi wildly overhead, showering the onlookers with hot sake and water. He dips them back in and swings them several times. Anyone who gets splashed is thought to be granted good luck for the rest of the year. The festival ends with everyone being given a cup of the sacred liquid to drink.

The final festival involves a Mikoshi, a heavy portable shrine, being carried around the villages on the shoulders of participants. Unfortunately, under the current circumstances, and with the advancing age of many of the villagers, some of these traditions are now very much in danger. Of the Ise Ondo singers, only myself and two others are under 60 years old.

Kanii Shrine is a perfect example of the rich history and fantastic tales that can make seemingly insignificant rural shrines really come to life! 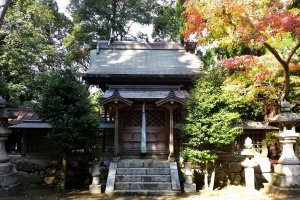 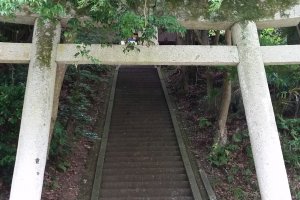 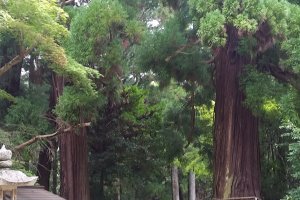 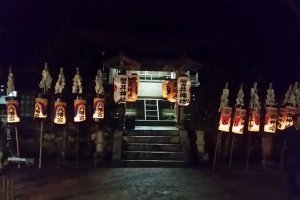 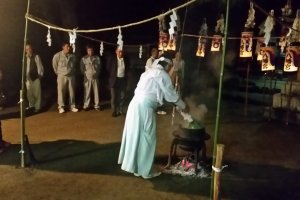 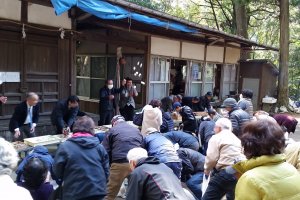 Elizabeth S 10 months ago
Wonderful storytelling! I hope that young people can get turned on to the history and lore there to continue the traditions you observe there.
Reply Show all 1 replies

Gary Luscombe Author 10 months ago
We were hoping for a big crowd after we performed the song on stage last year but unfortunately the shrine grounds suffered some typhoon damage and we had to cancel.

There are quite a few of us that work to preserve and promote our little local traditions though so when the risk gets lower, we might perform it at a few other events to generate interest.
Reply

Alena Eckelmann 10 months ago
Great find, Gary. The story of legendary Emperor Jinmu is being told everywhere on the Kii Peninsula. He sailed around the Kii Peninsula and landed in the south near Shingu, then walked across guided by the legendary three-legged crow. How he could cross the peninsula covered with steep mountains and deep valleys with an army is a mystery. I am curious about the ancient song. This call-answer chant seems to have been popular in the old days but very little has been recorded and documented.
Reply Show all 1 replies

Gary Luscombe Author 10 months ago
To look at the hillside where Kanii-jinja is, it is impossible to imagine an army camped there at all. It's very small and uneven, plenty of shelter from trees but no useful flat areas. It does sit next to a narrow valley that the Koya Kaido runs through, so I think it is more likely the army would have camped there instead.

He had a very unlucky journey though; losing his brother (he died a few km from here in southern Izumi) and getting poisoned and put to sleep when he first arrived near Shingu. I have heard a couple of tales from some old folk that Yatagarasu might actually have been a man, a kind of mix of what we would now consider yamabushi and ninja. Never enough to be able to corroborate the story though.

I don't have a video of the song that I have permission to use unfortunately. The version we sing though is actually made up of 3 or 4 songs drawn from the 3 villages that take part. We also included sections from another version that comes from a village on the other side of Kawachinagano that was I think submerged when a dam was built.
Reply

Bonson Lam 10 months ago
So much history in a shrine so far from the big cities. I would love to be there for the harvest festival and see the Chochin Mairi lanterns and the Ise Ondo chants. Do you have to rehearse for a long time before the festival?
Reply Show all 1 replies

Gary Luscombe Author 10 months ago
I haven't taken part in the festival proper yet (just as a spectator) as it was cancelled last year due to typhoon and this year due to Covid.

We did perform it on stage as part of a large theater production though and practiced once or twice a week for about 4 months. The song and timing is not "too" difficult to learn though I was much slower because I had no idea what I was actually singing (and still don't!)
Reply

Elena Lisina 10 months ago
I really love the history and cultural traditions of Japan! Great article, thanks!
Reply Show all 3 replies

Gary Luscombe Author 10 months ago
Thanks Elena! Trying to focus on a few little places closer to home at the moment but the list is endless even in just a small area like Kawachinagano!
Reply

Elena Lisina 10 months ago
I prefer such small places, far away from touristic spots - I think it's real Japan! :)
Reply

Gary Luscombe Author 10 months ago
For a couple of the Chochin Mairi festivals, I actually brought some guests of the ryokan along with me to watch. It gave them something unique to see and they really appreciated getting to chat with some of the locals and learn about the area and festival directly.
Reply
10 comments in total