Helping you around since 1933

Osaka boasts an affordable and effective subway network that, just like everything train-related in Japan, runs exactly on time and moves more than 2.29 million passengers every day!

The eight lines are the primary mode of transportation in the city, as - unlike Tokyo, which is well-serviced by Japan Railway trains in addition to the Metro - aboveground trains are far less common in Osaka's core. Foreign Japan Rail Pass holders will find that their passes are next to useless in Osaka, where they can only be used to enter the city, use the circular Loop Line, or leave it in favour of points north or westward. Most of the private trains, such as Hankyu and Keihan, are primarily used to commute elsewhere in the prefecture. For everyone in the core, there's the subway.

The subway lines in Osaka are laid out, for the most part, on a grid system, and the majority are S-shaped, enabling good coverage city-wide. Most run on a third-rail system. All lines also connect with the JR or private railways at some point, while certain lines, such as the Midosuji Line, share tracks and provide through service with private railways.

Each line is colour-coded and maps are available in each station and on the trains.

As is the case with all trains in Japan, the fare is charged from departure point to destination according to distance. Fare within three kilometres will cost the adult rider 200 yen, the minimum. The maximum, a trip from one end of the city to the other with as many transfers as necessary, will run 360 yen. Transfers are all available without leaving the paid-fare area. Should you over- or under-pay, you can use the norikoshi machines located right before the exit turnstiles to adjust your ticket.

For those not wanting to deal with calculating fares, Kansai's rechargable transit card, ICOCA, can be used on all subway trains, but SUICA and other regional cards can be used on JR trains only. You can buy an ICOCA card at a Japan Railways station (for example, JR Osaka Station, or Shin-Osaka, the ​shinkansen​ station) and charge it in most private or subway stations, if you are planning to travel extensively and don't want the hassle of figuring out ticket prices each time. Fixed-price Surutto KANSAI disposable cards can also be bought and used in subway stations and will work on the private railways as well.

One-day or two-day City Passes are available for 2,000 and 2,700 yen, respectively. On Fridays and on the 20th of every month, you can also buy a No My Car Day pass, designed to encourage car owners to travel on the subway unlimited for far less than the cost of gas. No My Car Day tickets can be bought from any subway ticketing machine and are available to everyone.

The Osaka subway is clean, prompt, and efficient - a good example of a great underground system! 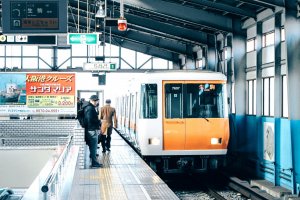 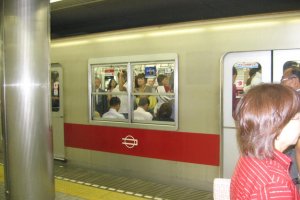 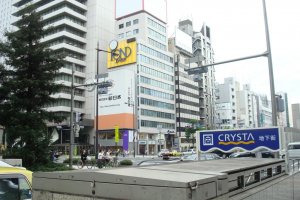