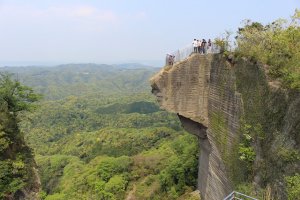 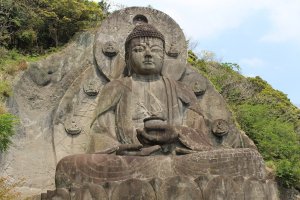 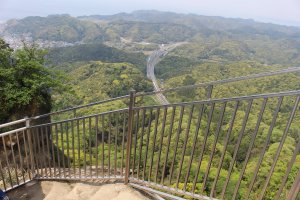 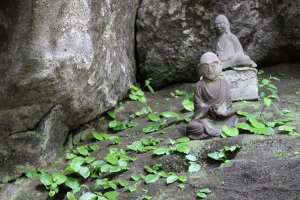 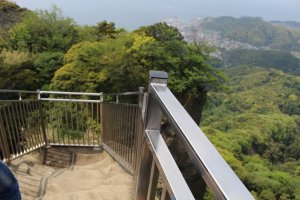 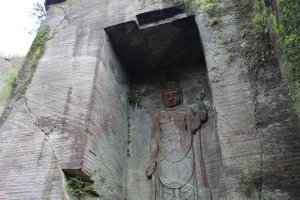 Mount Nokogiri (鋸山, Nokogiriyama) is a mountain on Chiba's Boso Peninsula, known for its saw-like appearance, jagged cliffs and unique rock formations. Although it was previously a stone quarry, the mountain is now home to a popular lookout deck and the Nihon-Ji temple complex.

The lookout deck, located at the summit of the Nokogiriyama Ropeway, faces west overlooking Tokyo Bay and the Uraga Channel. It has become a popular spot to watch the spectacular sunsets and the ships coming in and out of Tokyo Bay.

Spread along the slopes of Mount Nokogiri is the Nihon-Ji Buddhist temple complex. Originally built in the 700s CE, it has collapsed into ruins and been rebuilt several times. The most famous attraction in the complex is the Nihon-ji Daibutsu, a 31 meter (102 feet) tall stone structure of the Buddha of healing.

Other notable attractions include the Hyaku-Shaku Kanno, a 30 meter (99 feet) tall carving of the Buddhist Goddess of Mercy into a stone rockface, and the Bonsō bell which has been designated as an Important Cultural Property of Japan. In addition, 1500 stone statues of Buddhist disciples line some of the walking paths between the major attractions.

It takes at least two hours to fully explore the temple grounds, and since it gets dark at around 17:00 (the time the park closes), try to arrive by 15:00 to leave ample time.

Mount Nokogiri is accessible by either driving, or by taking the Nokogiriyama Ropeway (about ¥950 round-trip), which is a short walk from Hama-Kanya Station on JR’s Uchibo Line.

Nokogiri-yama forms the boundary between the Kazusa and Awa areas of Chiba's Boso Peninsula, and it offers amazing cliff views..

Mount Nokogiri is home to the large Nihon-ji temple complex and it's particularly famous for Japan's second largest statue..

Nihon-ji Temple and its big Buddha are a pleasant surprise for many travelers exploring the trails of Nokogiriyama.

Mount Nokogiri is a popular tourist site. Reaching the mountain is quite easy by ropeway. Additionally, the temple at the top of..

Chiba's Nokogiriyama is an little known day trip from Tokyo with thrilling views, an atmospheric hike through a forested t..

Mt. Saw Tooth, Chiba Prefecture: Day trip from the city for strenuous exercise, a history lesson, and some great view points for..

Big Buddha at Sawtooth Mountain will rock your world.

The south of Chiba Prefecture is designated as Minami Boso Quasi-National Park, a protected area of landscapes that coexist wi..

Awa-Amane is a gorgeous seaside hotel in Kyonan, Awa District where you can stay with your beloved pets. This is a unique hotel..

Try your hand at making thick sushi rolls, a local dish from Kanaya Bay that has been passed down from generations and is often..

When you visit many "Michi-No-Eki" roadside stations, you can find a lot of local produce, including fish and meat which is not..