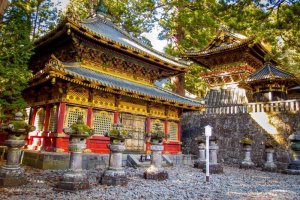 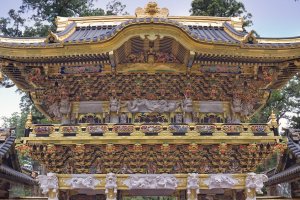 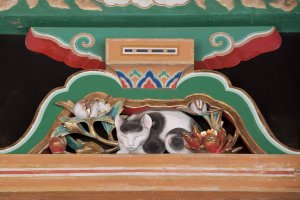 The Nikko Toshogu Shrine is arguably one of the most important religious sites in Japan and is located in the forests of Tochigi Prefecture. The shrine is the final resting place of Tokugawa Ieyasu, the samurai leader who united Japan in the early 1600s and the first ruler of the Tokugawa shogunate of the same name, which ruled Japan for over 250 years until 1868.

Originally a relatively simple mausoleum, Toshogu was expanded in the first half of the 16th century by Ieyasu's grandson Iemitsu to create the spectacular complex that can be visited today. The shrine complex consists of more than a dozen buildings, which have been refined with countless wood carvings and large amounts of gold leaf. This is very unusual as there is usually an emphasis on simplicity in shrine architecture. Toshogu contains both Shinto and Buddhist elements. The wood carving of the monkeys who see no evil, speak no evil, and hear no evil is best known.

With over 500 intricate carvings, the Yonmeimon is known as one of the most beautiful gates in Japan. Rows of elaborate golden dragons are carved onto the huge gate that marks the entrance towards the main shrine building. Yonmeimon gate is rightfully designated as a National Treasure, and is also known as the “Main Gate of the Imperial Court”.

Nemurineko, or Sleeping Cat, is a detailed wooden carving by Hidari Jingoro. The carving depicts a cat falling asleep while surrounded by flowers. Nemurineko is located at the East Corridor of Toshogu Shrine, where it's easily spotted by the crowds of visitors clamoring to take a photo of it.

One of Toshogu Shrine’s most famous sights, the lifelike wooden carving of three monkeys are located at the stable building within the complex. The monkeys represent those who hear, speak, and see no evil — a common saying in East Asian culture.

Standing at the entrance to Nikko's shrines, this sacred bridge actually belongs to Futarasan Shrine, however, visitors to Nikko Toshogu Shrine will cross it. It is considered one of the three finest bridges in Japan.

Despite being one of Japan’s most popular tourist spots, its fine carvings and immaculate structures are worth seeing again an..

A part of ‘Shrines and Temples of Nikko’, a UNESCO World Heritage site, this shrine is believed to be one of Japan’s most lavi..

The Grandeur of Toshogu Shrine

Impressive shrine complex; through the fantastic setting, bright colors and elaborate decorations one can still feel the wealth..

Tosho-gu is directly north of Edo Castle—the residence of the king of this world. Ieyasu thought that Tosho-gu would be the re..

Kano Tanyu designed huge numbers of sculptures and carvings for each building. There are 5173 in total. I would like to focus on..

Enshu secretly introduced various Western styles into Tosho-gu. The three main techniques he used in there were: Perspective, ..

The Beauty and Wonder of Tosho-gu

Even after visiting Tosho-gu Shrine in Nikko more than 15 times, I still enjoy its different faces, depending mainly on the se..

Hongu Shrine in Nikko is an auxiliary shrine of Futarasan Shrine. Registered as one of the 103 World Heritage buildings of the Temples..

As part of the 'Shrines and Temples of Nikko,' Nikko Toshogu Shrine, located in Tochigi Prefecture, was registered as a..

Texture and pattern at Tōshō-gū

Focusing on the mix of decorative patterns and natural textures at Nikko's most famous shrine, Tōshō-gū.

I'd like to share the beauty of Nikko with you--in the rain. This story focuses on the nooks and crannies of the area just OUTSIDE..

Why not review more places in Tochigi?

Traditional Japanese ryokan and its facilities and the walk along the main street of Nikko Town.

Nikko Kanaya Hotel commands the best location for access to Nikko’s World Heritage Site. You can enjoy every bit of Nikko’s ch..

The Kanaya Hotel in Nikko

If you stay at the Kanaya Hotel, I recommend that you become an “early bird”. You will never forget the mystic view of the Shi..

Honke Yamabiko is a wonderful noodle shop conveniently located next to the World Heritage shrines and temples in Nikko. Stop in..

There is an excellent restaurant specializing in eel in Nikko called Sawamoto. In fact, their broiled eel is the best I have ever..

Among Nikko’s many world-renowned temples, stands the vibrantly colored Rinnoji (輪王寺), which was designated as a UNESCO World Heritage Site in 19..

Tamozawa Imperial Villa is a former imperial summer residence in Nikkō, Tochigi Prefecture, Japan. It was constructed for Emperor Taishō in 1899 and..

The Kegon Falls are located on Lake Chuzenji in Nikko National Park in Tochigi Prefecture. The 97-meter-high falls are one of Japan's top three waterfalls..