Unparalleled ryokan experience by the Sea of Japan

Japan is known for its quirky metropolitan cities and the contrasting beauty of its idyllic countryside towns. Where the former is easily accessible, it is difficult for visitors to decide upon a location that will live up to the massive expectations promised by them. While different regions in Japan offer their own unique vistas of this amazing country, for me Fukuma-kan in Mihonoseki Harbour, Matsue City, Shimane was truly an unforgettable experience of a lifetime.

Located in the Mihonoseki Harbour on the eastern tip of Shimane Peninsula, Fukuma-kan is a ryokan offering magnificent views of the Sea of Japan, while retaining a rustic, rural charm. Although a trip to the nearby cities and attractions such as Matsue Castle and Izumo Taisha will probably be on the cards, the beautiful harbour-side town of Mihonoseki and the hospitality afforded by Fukuma-kan is more than enough to impress you for days on end.

A relatively small ryokan, Fukuma-kan offers 12 rooms and an annex building. Each of the rooms are spacious and comfortable, furnished in a traditional Japanese style with tatami mats and comfortable villa seating. On the fourth floor, a Japanese-style room with its own balcony offering ocean views lets you further soak up the harbour-side atmosphere as you gaze down upon the fishermen plying their trade in below.

The annex building, however, is a true delight to stay in. A short 5 minutes walk away from the main Fukuma-kan building, the annex building has its own history, located right next to the Lafcadio Hearn Memorial Park commemorating the famous novelist who lived in and frequently mentioned Mihonoseki Harbour in his works.

The annex was recently renovated in 2013, with an emphasis on retaining the history of the building while polishing up its interiors. The result is an amazing accommodation to call your own during your visit to Mihonoseki. All 2 floors of the annex building are for a single group of guests, from an individual up to 10 guests. The building comes complete with a kitchen area, an extremely modern and stylish bathroom, a beautifully furnished living area, as well as three separate rooms for guests to lay on their futon.

How many ryokans do you know of situated at the doorstep of a major Shinto Shrine? Fukuma-kan is the building right beside the entrance tori of Miho Shrine, literally the next-door neighbour to this magnificent place of worship.

Miho Shrine is dedicated to Ebisu, Shinto God of Prosperity and Fishermen, and his mother Mihotsuhime, Goddess of Abundant Harvest. Mihotsuhime is wife to Ôkuninushi, none other than the legendary god of Matchmaking residing in the famous Izumo Taisha Grand Shrine. Ebisu, also known as Kotoshironushi, is their son.

Miho Shrine is thus one of a handful of Shinto shrines dedicated to more than one deity, and in fact houses the most prominent pair of mother and son deities in the Shinto Pantheon. As such, the Shrine is also unique amongst Shinto architecture for having more than one honden, main halls, in its grounds, one for each deity.

Right next to the Fukuma-kan, it is as convenient as it is magical to attend the sunset ritual held here everyday at 3:30pm, when the head priest welcomes back the deities to Miho Shrine for the night.

I had absolutely no idea what was about to come when I cited my wish to see the Sea of Japan as a reason for staying at Fukuma-kan. An hour later, I was on Fukuma-kan's own cruise ship, lapping up the ocean breeze on a tour of the Sea of Japan.

Japanese hospitality is renowned around the world, of course, but then not every ryokan boasts its own ship to tour astonished guests around the area. No matter how big or small your entourage, Fukuma-kan provides this service to guests upon requested, provided the weather is cooperative.

Mr Fukuma will bring you around the Mihonoseki harbour, then along the coast of the Shimane Peninsula, where you can enjoy a different glimpse of Mihonoseki Lighthouse from the sea below. Prepare to be wowed by miles and miles of endless waters with literally no end in sight.

The ship of Fukuma-kan is also used by local fishermen early in the morning, and arrangements can be made for guests to tag along for this early morning trip. Besides watching the Mihonoseki fishermen hard at work, the timing means that guests get to witness the beautiful sunrise over the Sea of Japan from the waters, a truly priceless experience. The fishermen leave at about 4:30am during the summer, however, so be sure not to oversleep for this one!

Fact is, you don't have to look far to find an amazing adventure of your own here in Japan. Away from the hustle and bustle of huge cities, treasures like Mihonoseki Harbour quietly await their next guests with all the friendliness and hospitality they can muster. If you are willing to take the plunge, I highly recommend that you put Fukuma-kan on your itinerary, and experience for yourself the amazing sights and sounds this quaint little seaside town has to offer.

Fukuma-kan is located in Mihonoseki Harbour, right on the eastern-most tip of the Shimane Peninsula. The closest JR Station/Bus terminal is JR Sakaiminato Station, which is itself a famous destination for fans of the popular Gegege No Kitaro manga series. The ensuing bus ride from the JR Sakaiminato Station will take 30 minutes, however Fukuma-Kan offers car rides to and from the station as you require, so long as you inform the hotel ahead (via email before check in). 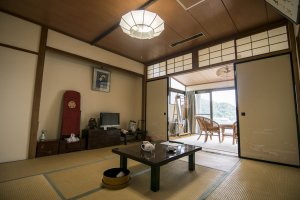 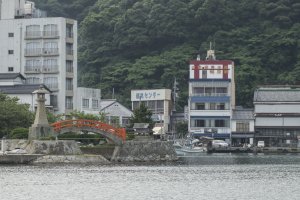 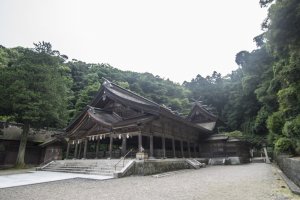 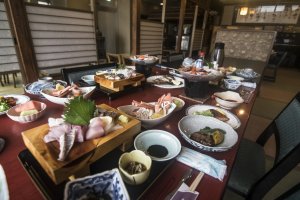 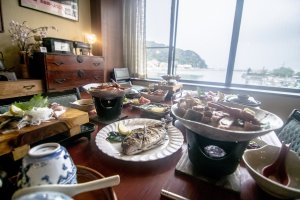 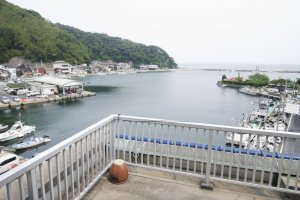 Katie Jackson 6 years ago
Gorgeous! That looks like an amazing place to visit, especially to escape hectic city life.
Reply Show all 0 replies

Victoria Vlisides 7 years ago
Looks like a pretty place :)
Reply Show all 0 replies