An airport with convenient access to Izumo and Matsue

Opened in 1966, the Izumo Enmusubi Airport (airport code IZO) is conveniently located within about 30 minutes of Shimane Prefecture's cultural hubs of Izumo and Matsue. The airport has inbound and outbound flights to a number of Japan's larger metropolitan areas, including Tokyo (Haneda), Osaka (Itami), Fukuoka, and Nagoya, as well as the Oki Islands.

The airport isn't directly connected to Izumo or Matsue by rail, but there are bus services available. The bus routes head to the JR Matsue Station, Matsue Shinjiko Onsen, JR Izumo City Station, Izumo Taisha Shrine, and Tamatsukuri Onsen. Fare details and timetables can be found on the airport's website.

Despite being a smaller regional airport, you'll still find a number of fun things to keep you occupied while you're waiting for your flight. There are several cute photo spots with statues of Shimanekko, the prefecture's mascot, displays relating to local mythology, and even a section where you can write your relationship wishes on an ema (a small wooden plaque used for writing prayers or dreams). You can either take your ema with you as a souvenir, or hang it in the dedicated area by the 2nd floor departure lobby. Eventually, the ema hanging there are passed on to Yaegaki Shrine, which is famous for people looking for relationship success.

For those who plan on continuing their journey around Shimane via private vehicle, there are a range of car rental companies available at the airport. There is a reception area for the individual rental companies in the arrivals lobby.

The Izumo Enmusubi Airport is located under 10 minutes by taxi from Shobara Station, served by the JR Sanin Main Line.

If you're driving to the airport, take the Shinji Interchange from the San'in Expressway. From there, the airport is approximately a ten minute drive away. 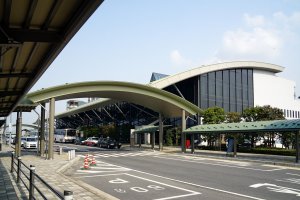 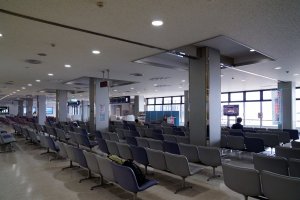 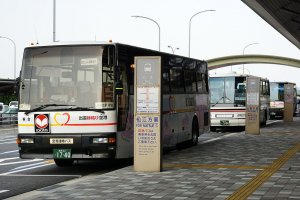 Sander van Werkhoven 2 years ago
For the adventurous, you can take the Sunrise Izumo overnight train all the way from Tokyo to Izumo! You can use this train with the Japan Rail Pass, though only "nobi-nobi seats" (which aren't actually seats but semi-open carpeted compartments.

As for flying, in my cancelled plans for this spring I would have used nearby Yonago Kitaro Airport, which seemed to have more and cheaper flights to Haneda.

I still intend to do basically that same trip whenever normal travel is possible again, so all these items about the San'in region are very welcome!
Reply Show all 5 replies

Kim Author 2 years ago
I wanted to do that (the train ride!) and heard that it was hard to get tickets. Maybe I need to try again sometime. Shimane is without a doubt one of my favorite spots in Japan, I sing its praises to anyone who will listen. Just one of those places that had an impact on me.

I only briefly passed through Yonago on my visit, but I hope to explore more of both Shimane and Tottori again in the future.
Reply

Sander van Werkhoven 2 years ago
I only did part of the route, from Okayama to Tokyo, and had no problem getting a reservation about 2 weeks ahead. Otherwise I could just as easily have taken the shinkansen. But it would indeed be bit of a gamble if you want to take the train on one of the first days of your trip.

I'm still really looking forward to visit Shimane and Tottori, it's one of the few regions I haven't been at all, and I've already seen so many interesting places I want to visit....
Reply

I hope you'll love both prefectures when you visit, I have such fond memories from both. Hope you'll write about your adventures, too! :)
Reply

Sander van Werkhoven 2 years ago
I know, I know. Had a couple of busy weekends, but right now it's too warm to do anything else. So no more excuses :-)
Reply

Elena Lisina 2 years ago
Once I wanted to visit Izumo, but found difficult to get there...
Reply Show all 2 replies

Kim Author 2 years ago
Much easier by air than train, as there are no direct shinkansen to Shimane. Willer Express also do an overnight bus to Yonago, Matsue, and Izumo, it's pretty reasonably priced!
Reply

Kim Author 2 years ago
Should have mentioned, the overnight bus departs from Shinjuku :)
Reply
9 comments in total