A Tree Grows in Oasahiko Shrine

I know human beings can hanker after immortality. In Greek mythology, at least, these efforts were usually botched up. Paris begged Helen to make him immortal with a kiss, and it sure did, he lives on as the dummy who died for a kiss. The mother of Achilles dipped him in a holy river to make him immortal, but inadvertently omitted his heel, and look what happened to him. If any living beings can venture successfully toward immortality, it might be Japan’s ancient trees, permanent residents in most temples and shrines. The 2000 year old camphor tree at Oasahiko Shrine, Tokushima, is an example.

I’m a tree hugger so this tree was the jewel in the crown of the Oasahiko Shrine. Its immense size, sprawling canopy of branches, and wide spreading leaves quite overshadowed the Shrine. Its dried, gnarled, wrinkled, trunk, with peeling bark, divulged its age and its character. But fresh green leaves at its tips showed it is still growing and alive. This is its pride, it will live forever, unless struck down by human hand or God’s.

The longevity of the old camphor at Oasahiko is, like the other ancients in other shrines, possible because of the Shinto belief that natural objects like trees, boulders, house sacred spirits and deities known as kami. The first shrines were reportedly sacred groves or forests where kami were detected, and today shrines are harboured and protected in heavily wooded areas. Such trees like the camphor at Oasahiko are considered to have now assumed their own divine identity. No longer the mere house of a kami, they have become the kami itself. People who wish to obtain similar longevity (or who knows, immortality) supposedly pray and touch its bark. To destroy such a tree is to be eternally cursed.

It is believed two kami now reign at Oasahiko Shrine. If they are in the old camphor, hopefully the tree is happy about it. The first kami once came to Awa, the old Tokushima, looking for land to cultivate hemp. This resulted in the area producing linen cloth, which became the mainstay economy of the region. Oasahiko Shrine was dedicated to worship him as a kami. The origins of the other kami are not so earthly. He came from Heaven to guide to earth the Imperial Family, and the founders of the human race.

The first documentation of the shrine was in 927. I wonder what the tree has seen or felt over the eons of its existence. I walked through a 15 meter tall vermillion tori gate to reach the tree and Shrine, as walking through the Tori can grant protection from evil and traffic accidents. The Shrine is not as popular as it used to be, and if not renovated, maybe one day it will fall into disuse and disintegration. But the camphor tree will remain, as long as old trees are honoured and worshipped as integral parts of Japan’s religion, culture, and heritage. This respect and veneration for trees is something that can click with other religions and cultures. As the American Joyce Kilmer wrote “Poems are made by fools like me, But only God could make a tree.”

1. Get there on JR train from Tokushima to Bando. Follow the Henro signs to Ryozenji Temple One. At Ryozenji main entrance, just slip to the left road, and keep walking.

2. There is a German House next to Oasahiko Shrine, which has a museum dedicated to the German prisoners of the first World War who were taken care of by the Japanese. It has the distinction of being the first place in all Asia where Beethoven’s Ninth was performed in 1918 by the residents of the so-called prison and the community. 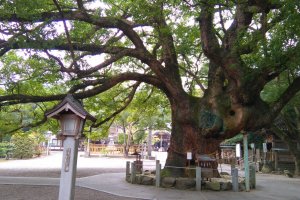 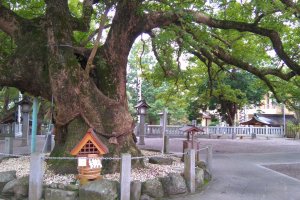 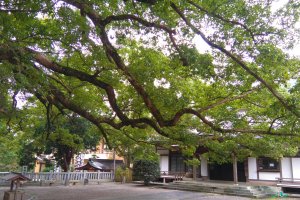