A Guide to Riding Trains in Tokyo

Tips, tricks and things to remember

To start, trains (like on the JR Line and the Shinkansen) are above ground and take you from city to suburb and back. Subways (like Tokyo Metro and Toei Subway) are several stories underground and are meant for intra-metropolitan travel.

Also, it’s good to know that the trains stop running around midnight (although the government has recently considered a 24-hour service), so it’s best to be at the platform of your last change by midnight, if not sooner. If not, you'll have to either catch a taxi or wait until about 5:00 a.m. when they start up again.

An Escalator Divided
Escalator etiquette is important namely because it is the same for all escalators, not just those at train stations. At least in the Tokyo area, you stand on the left side of the escalator to make room for those on the right side who want to climb the escalator steps.

Reading the Signs
The electronic signs on the platforms detailing train arrivals in the station alternate between Japanese and English. In the column all the way to the left, it’ll say the name of the line and whether the train is "local" or "rapid"—"local" hitting every stop whereas "rapid" will skip a chunk of stations. There is also "express" and "limited express," the latter sometimes having reserved seats and stop at fewer stations. As for metro lines, they will stop at every station. Signs on the platform will let you know at which stations each line does and does not stop. The middle column displays the departure time of each train. The final column shows what the end destination of that particular train will be.

“Why would some trains going in the same direction have an end destination that isn’t at the end of the line?” is something I have often asked myself after mistakenly getting on the train that stopped one station before mine. I don’t know the exact answer, but if this happens to you, it’s very likely that the next train will take you to your intended destination. So, just disembark and get in line on that same platform.

Where Am I?
On the train, if you’re worried about missing your stop or have no idea where you are, you can either listen to the announcement (for example, at the end of their speech, they’ll say the upcoming station: “Shibuya, Shibuya desu”) or wait until you’ve arrived at the station to read the signs in the middle of the platform or on the support poles. Another option is to ask someone next to you. For example, say “Sumimasen, Shibuya eki desu-ka?” for “Excuse me, Shibuya Station?”

Trains and subways tend to have their announcements declared in both Japanese and English closer to the center of Tokyo. Though as you move outward, the intercom announcements are in Japanese only.

Rush Hour Extreme
If you’re like me and pack your suitcase so full that you literally have to sit on it for any hopes of zipping it up, you already have a good idea of what it’s like being in a train car during rush hour. Weekdays in the morning from about 6:30 a.m. to 9:30 a.m. and in the evening from about 5:00 p.m. until 9:00 p.m. are usually when the train will be most crowded.

If you see a full train car and think you’ll just catch the next one: don’t bother, as the next one will most definitely be as crowded. During rush hour, Japanese train riders aren’t shy to plow their way through the car doors when necessary to make room for those behind them, so be careful. Push, or get pushed.

Not-So-Sleepless in Tokyo
If you scan the train car at any hour of the day, you’ll see people reading a book, quietly chatting up a friend, listening to music or sleeping. The latter still boggles my mind: how would anyone in hibernation mode on the train know when to depart?

After a long day of walking, I decided to try it myself on my way home. The trick? Don’t actually fall asleep. It’s nice to rest your eyes if only for a moment if you’re able to grab a seat (but I’ve even “slept” standing up), but much of my success in train-sleeping is due to knowing exactly how many stops away I was from my station.

Yet if you find that you’ve actually fallen asleep, like an older gentleman I sat next to once, you can usually exit the train at the next stop and hop on the train going the opposite direction on the same platform—just pay attention to the signs.

The Loo
Train station bathrooms might be a nightmare for anyone who's experienced them, but that's not the case in Tokyo. All station bathrooms are clean and useable. Also, you'll find that there's a usually a mix of Japanese and Western toilets to choose from.

For valuable train etiquette tips, check out this article. 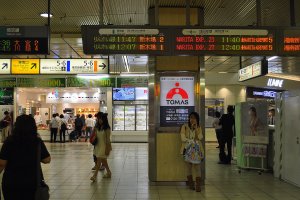 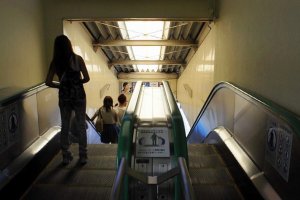 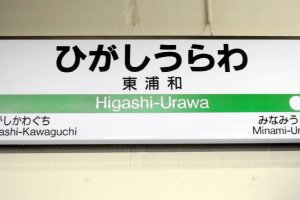 Corinna David 4 years ago
I always find myself getting lost in the train stations. Thank you for this article!
Reply Show all 0 replies

Meidiana Kusuma Wardhani 6 years ago
thank you for your informative article :) nice sharing!

Hannah Morse Author 7 years ago
Thanks wouter for that addition! There can never be too much information about this topic, that's for sure.
Reply Show all 0 replies

Wouter Thielen 7 years ago
Very informative! I have a few things to add: in Osaka and the surrounding Kansai area (Kyoto, Kobe, etc), standing on the escalator happens on the right side.

Also, some metro lines also have rapid trains that do not stop at every station. The Toei Shinjuku-line is an example. And on some lines, if you are at a metro station, be wary that you don't step on an actual train instead of a metro. For example, the Keisei line from Narita airport also rides over the Asakusa line after Oshiage, and will after Sengakuji go to Shinagawa or Haneda Airport, or Misakiguchi all the way in south Kanagawa, using the Keikyu rails. I once entered such a train in a distant past and was totally puzzled when the train went overground after Sengakuji, so don't let that happen to you :)

I am not sure if there are other lines with a similar behavior, but would be good to have a list of lines with caveats.
Reply Show all 0 replies
4 comments in total