Some good-to-know tips for a smooth ride

As a foreigner, arriving in Tokyo and getting on the trains for the first time can be intimidating, whether you don’t speak a lick of Japanese or you’re a bit shy to share your knowledge’s worth. Even if you’re a little worried, Japanese people are incredibly nice and willing to help you if you ask. These are the major common courtesies that you should know beforehand.

Getting On Your Way
The ground on the platforms typically has markers letting you know where the car doors will arrive. When you’re about to embark on a train car from the platform, you want to stand on either side of the doors in a queue. Let all of the passengers out before entering the car yourself.

Similar when exiting, try to make your way to the doors that will be opening upon arrival. This will make for an easier time, rather than sumimasen-ing and gomen ne-ing your way toward the car exit as passengers are getting on.

Also, if you find yourself on the near the doors of the train during rush hour, it’s best to step aside to let others off the train. If you aren't able to do so and are still in the way of passengers disembarking, just step off the train and wait next to the door. After everyone has left, just embark once more making room for the new passengers.

Traveling in the early morning hours has another set of rules, depending on the train. Some lines have "women's only" cars, used by women going to work who don't want to be subjected to potential unwanted attention by salary men. This doesn't mean that women can use those cars only, but male passengers should refrain from using the marked "women's only" cars in those hours.

Finding a Seat
I’ve found that the best times of the day are when the train seats are plentiful. There aren’t specific times as they seemingly change with the tides. Typically, if you find a seat, you can take it unless someone looks like they’re about to sit down. This isn’t musical chairs, mind you.

But if you find yourself standing with no hope of resting your legs, all you need to do is stand and hang onto a handle that’s in front of any seat. With any luck, the person sitting in that seat in front of you will be disembarking soon enough, and you can then bask in the gloriousness of that seat.

Another thing to remember is to be courteous and do not put your bags on the seat next to you. Either keep them closely in front of you, on your lap, or on the metal shelving above you.

A good thing to know is that if you are sitting down without any open seats in sight, and near you is an elderly person, a pregnant woman, a person with children, or someone who looks like they could use a seat, it is very polite and encouraged to offer them your seat. Simply stand, point to the seat, smile and say “Dōzo.”

Quiet is Key
It’s common knowledge on Tokyo trains to be quiet and respectful of other passengers. Most people tend to keep to themselves, passing time on the train by reading or sleeping. You are able to talk, just be mindful of others and speak low. Signs are posted in each of the cars asking passengers not to use their cell phones, so don’t take calls while on the train.

For more about riding trains, check out this article. 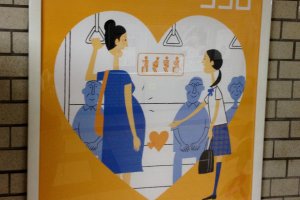 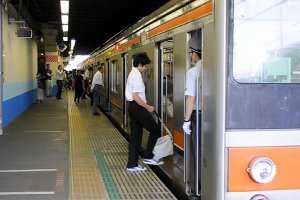 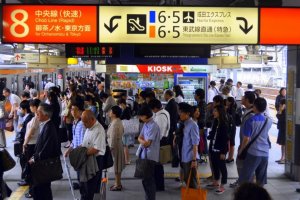