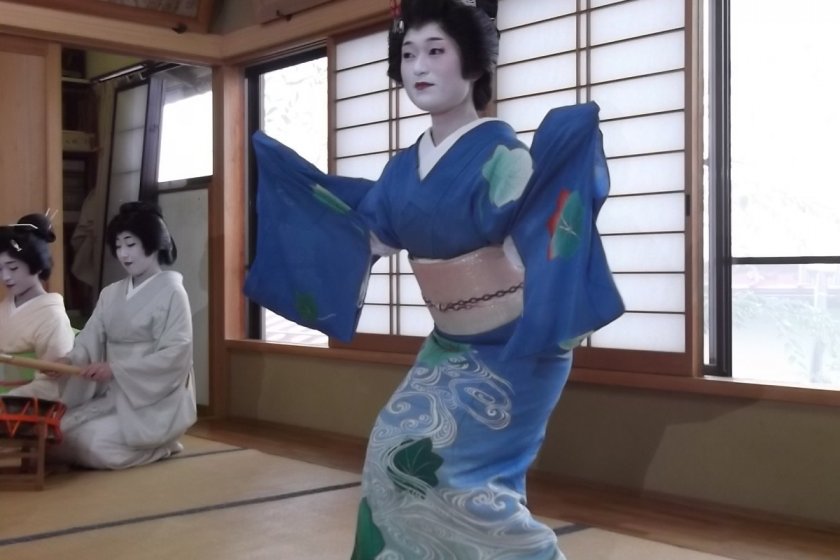 Eat, drink, play with Geisha on a Buddhist mountain

One of the dance performances

A couple of hours west of Tokyo, Mount Mitake is both a sacred Buddhist mountain and a beautiful place for hiking, an escape from the noise and bustle of the big city. In order to promote tourism to the area, they hold a monthly event called Celestial Geisha Night, allowing visitors to enjoy this most traditional of Japanese entertainment.

Starting in the afternoon, we first saw a dance performance on an outdoor stage, though the unkind weather meant that the audience were all also under a canopy. Two senior geisha knelt at the back of the stage singing and playing shamisen, while three younger ones danced at the front; all of them were wearing beautiful kimonos, in understated colours with simple but elegant designs, while the dancers were also fully made-up, their heavily white-painted faces contrasting with their red lipstick and high, jet-black wigs.

They performed a number of short dances, though I couldn't understand fully because they were explained only in Japanese; some seemed to be telling little narratives, with subtle movements conveying the feelings of the characters, while one was more jauntily comical, one geisha playing a pumpkin and the other an eggplant. It was entertaining to watch these different styles of dance, and the half-hour of performances passed quickly.

We moved inside next, to the impressive function room of one of the mountain's inns. First we were served some snacks and drinks - sake, wine, soft drinks all available - then the geisha mingled and chatted with the guests, some of them in capable English, also always making sure our drinks were topped up. This was a good chance to find out more about the life of a geisha, and about the women behind the make-up, their motivations for becoming geisha and how they find it fulfilling.

The promised geisha-asobi (games) turned out to be variations on rock-paper-scissors, pitting guests against geisha; having sat right at the front, me and my friends of course were called on to take part, but somehow none of us managed to win. (I comfort myself that the geisha are the professionals here.) This was fun also to watch because it was played pretty rapidly to a chant that we all joined in with; the winner of each round would bong a little drum on the floor, and the loser would have to spin round quickly on the spot (a cunning rule which I'm sure was a factor in my defeat.)

The next game involved acting; the players were separated by a screen, and each side had to mime as a hunter, a tiger or a grandmother, then they'd make their way to the front past the screen so they could see each other. Hunter shoots tiger, tiger eats grandmother, and grandmother beats hunter, possibly by nagging him insane. Watching this was entertaining because of the acting-out, with the elegant geisha comically crawling around as wild carnivores.

This year (2014) there'll be four more events, on 17th September, 14th October, 18th November and 9th December. It's all free, but places for the geisha-asobi are limited so it's best to reserve in advance. I'd also recommend staying overnight at one of the mountain lodges, to save dashing back for the last cable-car, allowing you to enjoy the scenery and atmosphere. 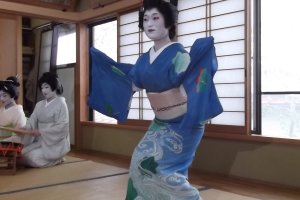 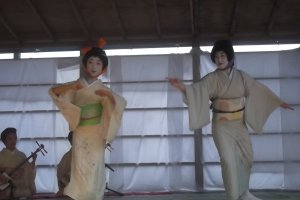 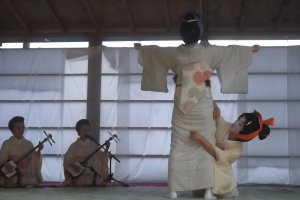 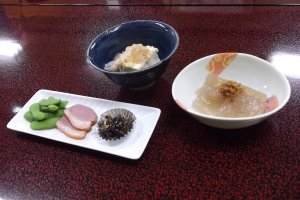 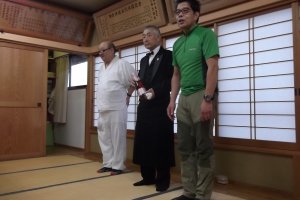 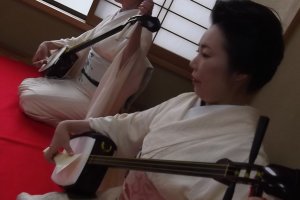