One of Tokyo's largest municipalities, Hachioji City is deeply imbued with a surprising sense of history. Doorstep to the famous Mt. Takao, the city's history and landmarks run the gamut from haunted spaces and natural groves to lost feudal highways and castle ruins. Here is a simple introduction to some of the history and landmarks of Hachioji City and how to reach them.

A famous haunted spot for ghost hunters and lovers of the supernatural, the Doryo-do Ruins sit in the middle of Otsukayama Park. A former temple, the ruins are associated with a series of unrelated murders that occurred in the mid-1960s and 70s. Legend has it that the cries of the victims can still be heard while the temple itself was demolished in the mid-1980s.

A 15-minute no.69 bus ride from Hachiojiminamino Station on the JR Yokohama Line.

Though the buildings no longer exist, the entrances, bridges and walls of the old Hachioji Castle Ruins make for a fascinating exploration of Japan's feudal history. Built by the powerful Hojo clan in the late 16th century, the scope of this National Historic Site is impressive and includes ghost legends that add a haunting presence to the area.

A 9-minute drive from Takao Station on the JR Chuo Line.

Once used to transport raw silk to Yokohama, the Kinu no Michi has been recognised as one of the nation's '100 Historical Roads'. Unpaved and thoroughly natural, the road now offers a glimpse into the halycon days of the area's silk industry as it branches away from the nearby Silk Road Museum and cuts through some local forest growth.

A 20-minute no.63 bus ride and walk from Minami Osawa Station on the Keio Line.

When in bloom, the 1400 plum trees at the Kogesawa Plum Grove are a truly stunning sight. Open only during the spring season at the time of the Plum Blosson Festival, the pink and white trees of the grove are a sight to behold. Walking trails make a trip around the grove easy and the views, naturally, are spectacular.

A 12-minute drive from Takao Station on the JR Chuo Line. 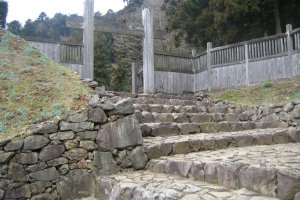 Kim 4 months ago
Some really nice views from the castle ruins there!
Reply Show all 1 replies

Sleiman Azizi Author 4 months ago
A shame the buildings aren't there but yeah, a pretty good spot with good views to boot.
Reply

Elena Lisina 4 months ago
Kogesawa Plum Grove in bloom is what I'd like to see!
Reply Show all 1 replies

Sleiman Azizi Author 4 months ago
Yes, you like your flora!
Reply
4 comments in total
Back to Contents