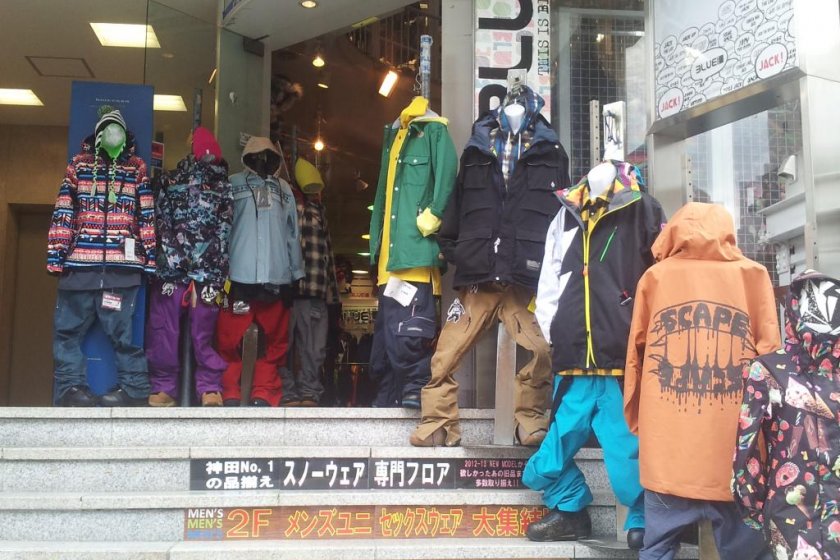 A paradise for ski/snowboard gear enthusiasts

Mazes of racks of jackets lie in wait

There is a street close to Jimbocho and Ogawamachi that is mainly made up of shops selling snowboards and skis. With thousands of people heading to Japan each year to experience the amazing snow, this one little stretch of Tokyo is somewhat of a pilgrimage for many international visitors. (If you are not into winter sports though it is just a baffling jumble of sports shops, so you might not get quite as excited as I do.)

There is something slightly medieval about grouping similar tradesmen together in one part of town, but if you are looking to buy new gear, medieval works. If you walk from Ochanomizu Station you’ll stroll down a street selling nothing but musical instruments, though I must admit I don’t get quite as excited about this bit of town. Head out the Kanda side and books seem to be the product of choice.

Back to winter sports gear though - along Yasukunidori there are lots of shops, from big name, chain sports stores, to small independent specialists catering to a niche, to a dumping outlet for gear from seasons gone by. Even up the side streets there are plenty of little boutiques hidden away. If you don’t know what you are looking for it can definitely be an eye-opening experience. There are floor upon floor dedicated to boards, skis, jackets, goggles, gloves... You’ll be hard pushed to keep track of all the things you were interested in and where you saw them, let alone your price comparisons. The sheer range is amazing and you will see designs and fashions that you probably won’t find in your home country. It is not necessarily cheaper than other places but with so many shops competing so close there are normally deals to be had. Most shops will also have a section for last season’s equipment and styles, which are often offered at reduced prices. If you’re OK not keeping up with the bleeding-edge, hip kids on the slopes, there are good bargains to be had. If you are just looking for cheap then head to the shop with masses of gear piled up in bins.

For skiers and boarders it is a little slice of gear heaven, and even if you just have an occasional trip up to the mountains you can probably save yourself some money on rental with the right purchases from this street. Prepare for some walking and to be dazzled by the acres of choice. 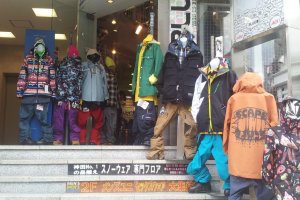 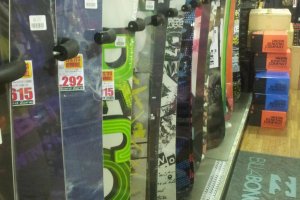 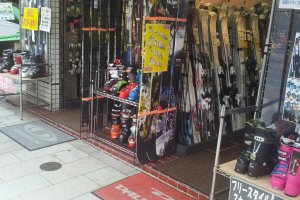 Muhammadamjad butt 5 years ago
Your collection of winter is look nice so increase your business.
Reply Show all 0 replies

Carol Akiyama 5 years ago
The shop in this district with the best deals is called London Sports. Their selection is limited but the discounts are tremendous!
Reply Show all 0 replies

Victoria Vlisides 5 years ago
As the weather is getting colder and colder... this looks nice!
Reply Show all 0 replies

Terrie Lloyd 5 years ago
Last ski season (2014) I took my daughter here to get jacket and ski trousers, along with some other paraphernalia. One thing you learn very quickly is to go to at least 3-4 stores, because each one has some "last season" special that is 50% off or more, and yet is perfectly serviceable. When you're talking about JPY25,000-JPY50,000 for a ski clothing set, that kind of discount can make a big difference. I didn't see a huge gap between outlet type places and regular stores -- you simply need to look around.