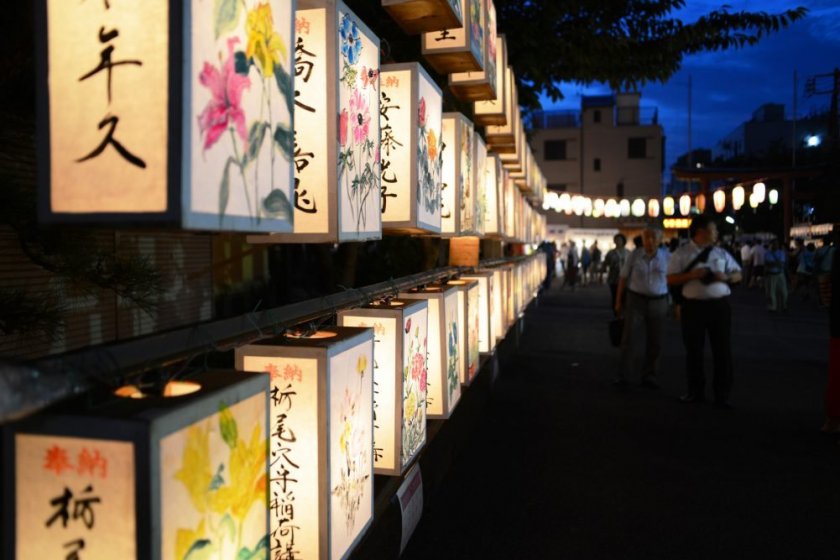 Summer in Japan is festival (matsuri) season, which means fireworks, dancing, street food, and plenty of colorful yukatas! While it all kicks off as early as July, festival fever does reach its peak until August, when there is undoubtedly a matsuri happening somewhere throughout Japan on any given day of the week.

Ota City hosts a number of festivals that offer a fun and traditional Japanese summer experience, and here is a list of those not to be missed. So slip into your yukata and get ready to hit the matsuris – and don’t forget your uchiwa, ‘cause it will be hot out there!

Though it’s an unofficial holiday, many Japanese people celebrate Obon during the month of August in order to honor the spirits of their deceased ancestors, taking around three days vacation at this time. The occasion is marked with Bon Odori festivals, where participants of all ages perform a traditional bon dance to the sound of taiko drums and flutes, dancing around a decorated tower structure known as a yagura. The dance is said to welcome the spirits of the deceased back home.

Awa Odori is known as one of the more energetic Japanese festivals due to the style of dance performed. It originates from Tokushima on the island of Shikoku. The Awa Odori is a folk dance unique for its irregular and energetic movements. It is said that the dance started out as a celebration of the newly-built Tokushima Castle; supposedly the townspeople happily guzzled sake until they broke out into a drunken dance that became known as Awa Odori.

The Kojiya Awa Odori is held along the town’s shotengai (shopping street) where roughly 600 spectators join – lined up 10 rows deep – to watch the dancers and cheer as they pass by. There are about 150 kids who also participate in the performance.

The Kojiya Awa Odori is held along the town’s shotengai (shopping street) where roughly 600 spectators join – lined up 10 rows..

With fireworks being another must-see for Japanese summer, Ota City holds its very own fireworks festival on August 15th – the date marking the end of WWII in Japan. The city first hosted the festival in 1987, after declaring itself a Peace City, and has held the event annually ever since. It celebrates the occasion by lighting up the sky with fireworks following the official Peace Memorial Ceremony.

Note: In cases of inclement weather the event may be cancelled.

The Lantern Festival at Anamori Inari-jinja Shrine features some 700 illustrated lanterns that line the inner grounds of the shrine and are lit up each evening for the three-day period. The lanterns are consecrated by the shrine’s priest and offer blessings for business prosperity, traffic safety, and home safety. Each day of the festival the lanterns are lit one by one from 6:00 PM until 9:00 PM. (Lanterns will only be lit on Friday and Saturday evenings)

In addition to admiring the beautifully illustrated lanterns, you can enjoy music performances, bon odori dance, and even a market selling local goods. The market is held on the final day in the morning from 9:00 AM. 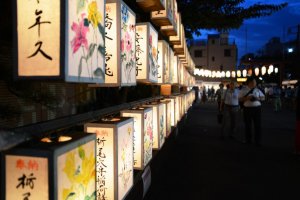 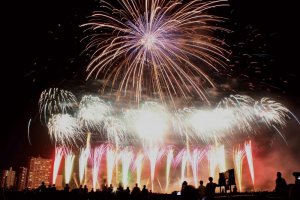 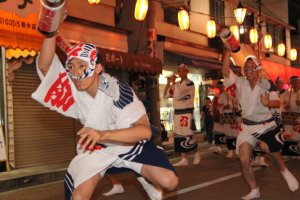