One of Tokyo's oldest shrines, Torigoe Shrine is also one of its least known. With a history stretching back over 1300 years to the earliest days of the nascent Japanese nation, this Shinto shrine in southern Taito found its birth when the legendary warrior Yamato Takeru no Mikoto stopped by to rest and the locals set up a shrine in his honour.

Centuries later, another warrior found his way into the area and whose prayers for victory lead to the naming of the shrine. Searching for a way to defeat the enemy, Minamoto no Yoshiie received advice from a bird who told him of a sandbar over which he could manoeuvre his troops. The advice proved valuable and to this day, the shrine goes by the name of Torigoe, or 'bird going over.'

The sandbars that the shrine's name refers to are long gone thanks to land reclamation projects that began in the Edo period and the hill that the shrine once stood on was removed to make way for the shogun's rice granaries. The current split-level construction stems from that period.

Unlike the shrine's main Torigoe Night Festival in June that sees a portable four-tonne mikoshi shrine paraded through the neighbourhood, it is perhaps the many rituals held throughout the year that give this shrine its life. None more so than the tondo-yaki ritual held on the 8th of January where mochi rice cakes are baked in the flames of a bonfire lit with flintstones and fed with New Years decorations.

The only remaining example of this ritual in all of Tokyo, it turns out that Torigoe Shrine has inadvertently become a repository of Tokyo - and Japanese - history and along with its pleasant surroundings, makes for an enjoyable visit, away from the bustle of more famous shrines. 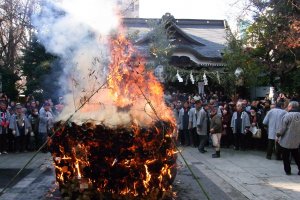 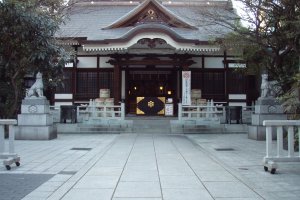 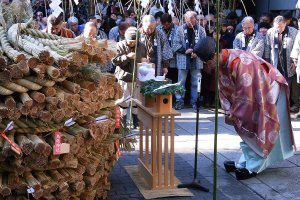 Kim B a year ago
The tondo-yaki ritual sounds so interesting!
Reply Show all 3 replies

Sleiman Azizi Author a year ago
Right? Hoping to get there this coming January though we may be a day or two off. Ouch!
Reply

Kim B a year ago
Hope you get to go - it would be such a unique experience!
Reply

Any time of year, the "ujiko", or parishioners of the shrine, who run businesses there, are pretty cool people.
Reply Show all 1 replies

Sleiman Azizi Author a year ago
The flame has me entranced.
Reply
6 comments in total