Your link to the Sand Dunes and beyond

Tottori Prefecture has a wealth of things to see and do, and for many, the starting point for their adventures in the region will be Tottori Station. Served by the San'in Main Line, the station has been in operation since 1908 and provides easy access to many of the region's top attractions, including the Tottori Sand Dunes.

Tottori Station is also the departure point for the Kururi bus service. The buses operate in three color-coded loops (red, green, and blue), with departures from the station taking place approximately every 20 minutes. At the inexpensive price of 100 yen per ride, it's a cost-effective way of getting from A to B in the city.

As for the amenities here, you'll find two tourist support centers (one of which is specifically designated for international visitors), public restrooms, coin lockers, and a variety of stores selling local souvenirs and food products. There's also a department store directly across from the ticket gates called Shamine, which is home to several retail stores, drug stores, and cafes, including chains like Starbucks, Doutor, and Nana's Green Tea. The Nana's Green Tea cafe manages to make a special connection to Tottori despite being a chain store - the walls here are covered with inshu washi, a traditional type of paper which originates from the eastern part of the prefecture, and the tables are made from locally-sourced Chizu cedar.

Bus services are also available from the airport to the station. Timetable information can be found here (in Japanese).

For those driving to the station, take the Tottori Interchange from the San'in Expressway. From there, the station is approximately 10 minutes away. 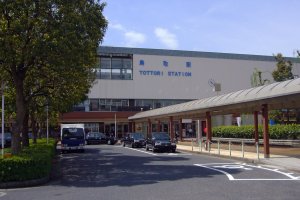 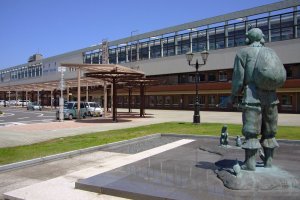 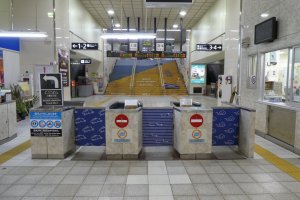 Elena Lisina a year ago
I wonder what is the sculpture group near the station?
Reply Show all 0 replies
1 comment in total