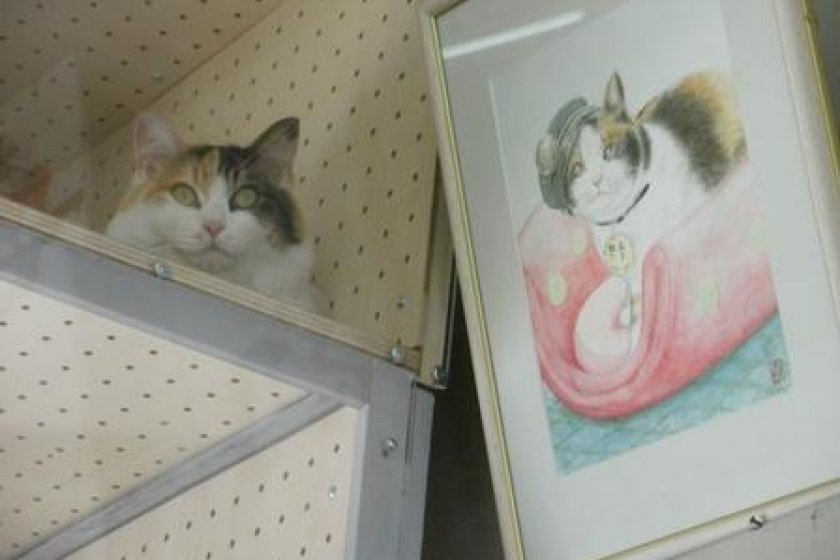 Nitama with portrait of Tama

A story from Japan’s rich folktale heritage tells of the maneki-neko, “beckoning cat”. A poor fisherman fed a homeless feline daily from his meager catch, but when he became ill and unable to work, the cat repaid him by bringing him a fresh fish to eat every day. The staff of Wakayama Electric Railway celebrate their very own maneki-neko, a calico named Tama who brought them luck and money.

The Kishigawa Line of the Wakayama Electric Railway originates from Platform 9 of JR Wakayama Station, and makes twelve stops over 14.3 km in beautiful rural areas before reaching its terminus, Kishi Station. In April 2006, railway executives decided to cut costs by converting Kishigawa Line stations from manned to unmanned. Employees of businesses along the Kishigawa Line were given honorary positions as station masters. The manager of the grocery store next to Kishi Station became master of that station. She fed several stray cats, including Tama who became so popular with commuters that in January 2007 she took over as Station Master. Her duties were greeting and seeing off passengers. Her appointment resulted in a strong increase in ridership and, by some estimates, has pumped more than a billion yen into the local economy. The Wakayama Electric Railway thanked Tama first by promoting her to Super Station Master in January 2008, converting a disused ticket booth into an air-conditioned office for her and paying her a salary of cat food. 2010 brought Tama another promotion, to Operations Officer, and major renovations to Kishi Station. Today the rebuilt station building is shaped like a cat’s head, and cheery drawings of Tama adorn every flat surface. There’s also a Tama Café serving coffee along with gelato made from Wakayama’s specialities, oranges and strawberries.

The unique trains on the Wakayama Electric Railway Line delight visitors. The Ichigo (Strawberry) Train is decorated with images of the fruit, and contains seats and tables made of wood with soft cushions. The Omocha (Toy) Train displays in glass cases famous Japanese playthings such as cartoon character dolls, and is the first train in the world to carry coin-operated toy vending machines called gacha-gacha. Of course, the most popular train is the Tama Train, featuring whiskers on the front and 101 painted illustrations of the feline running, dancing or lying down. On the Wakayama Electric Railway’s homepage is a schedule stating which days each train runs.

Since Operations Officer Tama resides with the grocery store manager, she doesn’t come to work on Sundays because the shop is closed. Tama’s popularity prompted the appointment of another cat, Nitama, as Super Station Manager at nearby Idakiso Station. Nitama is also a calico but her fur is longer than that of her senpai (senior). She lives with an Idakiso station employee, works at Idakiso four days a week and fills in for Tama on Sundays at Kishi. Souvenir shops at both stations offer postcards, keychains and other items with images of the cats.

Even those visitors not interested in cats or trains can enjoy the views of the countryside from the Kishigawa Line, and several shrines can be accessed from it. Strawberry-picking is also possible around Kishi Station from February to mid-May. There’s something for everyone on the little train line Tama built. 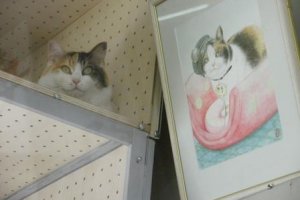 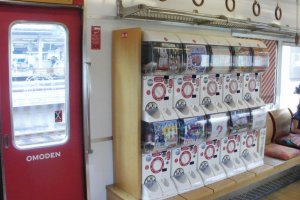 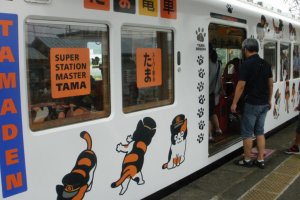 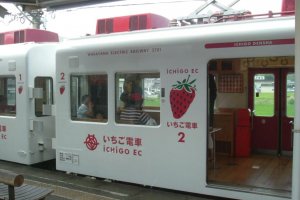 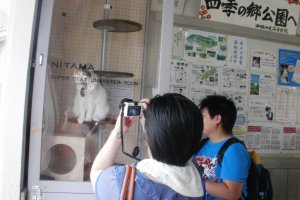 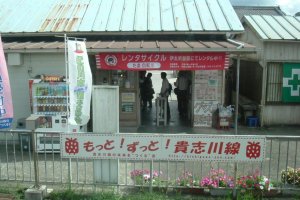 Mary Kawai Author 7 years ago
The beloved Ultra Station Master Tama passed away on June 22, 2015. She was sixteen years old. She will never be forgotten.
Reply Show all 0 replies

Mary Kawai Author 9 years ago
@wouter, that would be great! Maybe someday.
Reply Show all 0 replies

Wouter Thielen 9 years ago
Does this mean free cat food for catsengers on all stations of the Kishigawa Railway? :)
Reply Show all 0 replies

Mary Kawai Author 9 years ago
Newsflash! On April 24, 2013, Tama was promoted to Acting President of the Kishigawa Railway and given a commemorative gold medal.
Reply Show all 0 replies
4 comments in total