Celebrate the beauty of over 2000 cherry trees in Yamanashi

Yamanashi's Oboshi Park is a delight during spring for cherry blossom fans - the grounds here are home to an impressive 2000 cherry trees. On clear days there's even the chance to score a view of Mount Fuji, so it may not come as a surprise that the park was named one of the Top 100 cherry blossom viewing sites in Japan.

A festival is held at the park during the blooming season, and it typically includes a number of food vendors and stage performances like taiko drumming. While the official event dates can fluctuate slightly from year to year depending on blooming conditions, plan for around the late March to early April timeframe.

The closest station to Oboshi Park is Kajikazawaguchi Station, which is served by the Minobu Line. From there, the park is around a 15 minute taxi ride away - or 40 minutes on foot if you're feeling energetic. 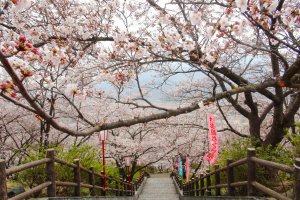 Elena Lisina a year ago
All those articles are SO teasing! We have to wait...
Reply Show all 1 replies

Kim Author a year ago
Hopefully people can bookmark them for the future!
Reply
2 comments in total