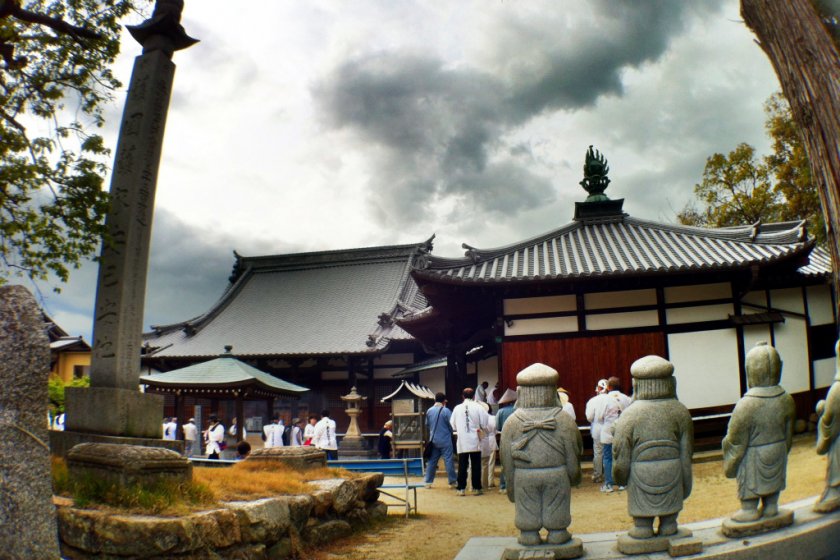 Temple No. 59 on the Shikoku 88 temple pilgrimage

Pilgrims at Kokubun-ji in Imabari

As you probably know, Shikoku means “four provinces” and today’s four prefectures reflect the old system of provinces. During the Nara period when Buddhism was becoming the religion of the elite in Japan, the Emperor Shomu sought to build a temple in each province. At that time, Nara was the capital of Japan, and Todai-ji, home of the Great Buddha in Nara, was the head temple of Shomu’s system. The temples were called “Kokubun-ji”, which means “provincial temple”. There are four temples named “Kokubun-ji” on the Shikoku pilgrimage, one for each prefecture.

But enough of nomenclature, what’s it like to visit Kokubun-ji? You could imagine that a temple of this pedigree might be rather grand, but in fact it’s quite a small temple on a little hill amid rice fields. I went on a spring day when the cherry blossoms had fallen to be replaced by brilliant green leaves. Some of the surrounding rice fields had been flooded and the first frogs of the season were giving voice. Interestingly, frogs respond to any noise that sounds a bit like one of them, and whenever the pilgrims in the temple started chanting, the frogs joined in.

Kokubun-ji has a nice stone fence around it, and stone gate posts that wouldn’t look amiss outside a country mansion. Outside the fence, the temple bell tower stands amidst a little grove of bamboo. Inside the fence is the Main Hall or Hondo, and the Dashi-do. Every temple on Shikoku’s pilgrimage route has a building called the Daishi-do to venerate Kobo Daishi, the founder of the pilgrimage. The one at Kokubun-ji is unremarkable, although it does have a fine flaming ball mounted on the apex of its roof. If you walk up the steps to the little shrine next door to the temple, you can look down on the roofs of Kokubun-ji, and admire their elegant curving lines from an unusual perspective.

Between the car park and the temple is a small shop selling towels and other textiles. These are printed with maps of the pilgrimage route and Buddhist symbols, and they make easily stowable souvenirs that won’t break in your luggage.

Kokubun-ji is one of six pilgrimage temples located relatively close together in Imabari. The others are Eifuku-ji, Senyu-ji, Nankobo, Enmei-ji, and Taisan-ji. If you visit on a weekend, you’ll encounter large parties of pilgrims arriving by bus. 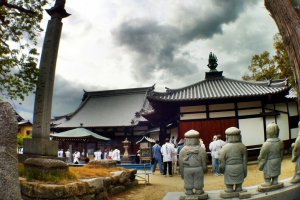 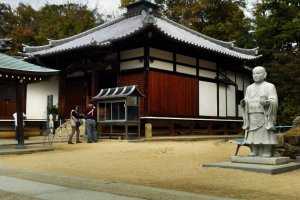 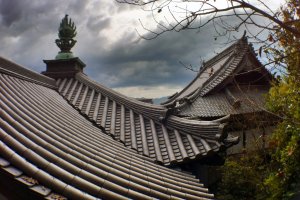