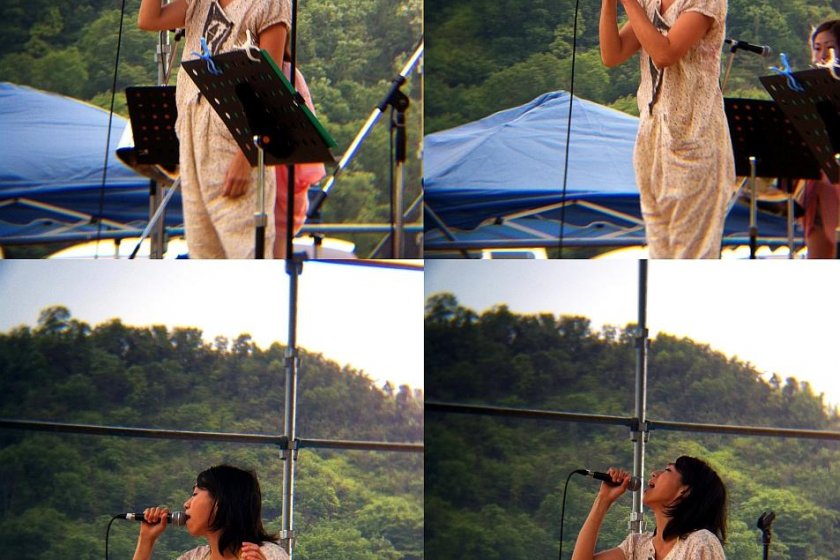 Mid May
Ua does her thang at Live Earth Matsuyama
Venue: Horinouchi When: Mid May 2021

The middle of May in Matsuyama is an uncertain time, weather-wise. It might be burning hot. It might rain. It might be cold and overcast. Or it might be all of these on the same day. It was pretty much like that on the day of Live Earth Matsuyama. This small local festival was held for the fifth time in 2012, and it has come a long way. Literally in fact. It used to be held in the car park of the gymnasium above the Fuwari Road Station.

As the name suggests, the festival is about live music with an earth-loving theme. The event runs from 10 in the morning to 7 in the evening. At around noon I made my way up the hill by bicycle towards the venue. It’s a long steep climb and I passed a number of people trudging up on foot. I didn’t envy them. As the car park came into view, I could hear a pleasant throbbing hum coming from the hilltop. This was the music of Dewachen, a combo that features sitar, didgeridoo, throat singing, chanting and hand percussion. Having handed over my 1,500 yen ticket, I bumped into an English friend who greeted me cheerfully; “We're living the dream. This drone is driving me nuts”. I plonked myself down on a tarp and was introduced to my friends for the afternoon. Someone went to the beer stall to get a round of Asahi Super Dry in plastic cups that had to be bought separately and reused, to emphasize the importance of resources. The cold, leaden sky gave way to scorching sunshine. Someone had given me a blanket to keep my legs warm, and I wondered about transferring it to my head for shade.

The venue was filled with rows of stalls selling a very tempting array of food with a generally “ethnic” theme, clothing, accessories and outdoor gear. Other stalls offered massages, aromatherapy and barefoot art for children.

In keeping with the earth theme, an activist gentleman gave a lecture for well over an hour about the lies and propaganda from the government and utilities concerning the Fukushima nuclear disaster. I agreed with nearly everything he said, which meant that he was preaching to the converted and could perhaps have saved his breath in favor of music.

Between the lectures, the music went on with some fairly major Japanese acts including Ua, who sang her interesting but undanceable freeform jazz, and Ikue Asazaki who sings in the Okinawan style. The sun went in again and it got really cold. Then the reggae/ska group Little Tempo took the stage, and at last some danceable music poured forth. Those with a taste for it shook their booty hard, waving empty reusable plastic cups. The Japanese rapper Rankin’ Taxi, topped off with a jaunty gold crown, joined Little Tempo and entertained the crowd with his scurrilous lyrics and banter.

Woodstock this ain’t. Nor is it Fuji Rock. But for a pleasant day out with food, music, and impromptu community, it can’t be beat. 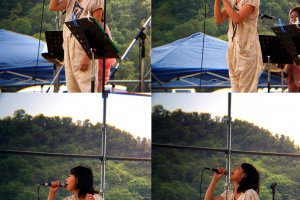 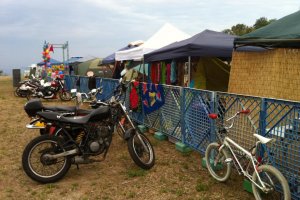 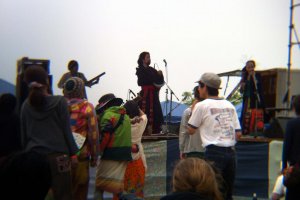 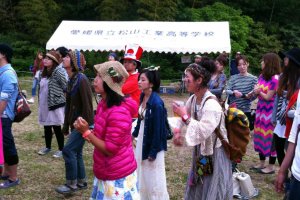 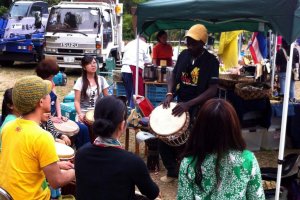 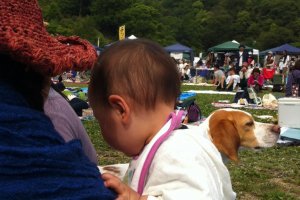