The Splendour Falls On Castle Walls

Matsuyama Castle doesn’t actually look too different from other Japanese castles. Built of stone and wood, their white plastered walls with distinctive curved black tiled roofs, stamp the castles with the same corporate look. Matsuyama Castle, however, perched on 135 meter high Mount Katsuyama, means you can enjoy rather splendid and different perspectives of the Castle as you clamber up any one of four trails, than if you were to take the rope-way or chairlift.

I felt dwarfed walking by the 14 meter high stone walls made of massive hunks of granite on the edge of the verdant 'Forest of Matsuyama Castle', rich with a wealth of trees like camphor, cinnamon, laurel, Japanese blue oak, fern, and only about 550 different varieties of plants. It is a splendor that really does fall on and around Matsuyama’s castle walls. I also felt dwarfed by history, walking on the Kuromon Trail, in use since the Edo period.

The castle's granite walls look like random rocks thrown around, and with no super glue, either. This turns out to be a correct perception. They are stones piled up at random, but the corner stones have been cut into rectangles for buttressing, with no gaps in sight. As I walked up, I did note the concave slope of the walls described as being like a concertina, a folding screen or fan.

This trail goes past the Ninomaru Historical Park, which I’m told many skip, including me, there being an entrance fee involved. Ninomaru was the location of the Lord's residence and offices. As it has been reproduced as a park following the original castle’s floor plan, it supposedly augments understanding of the castle. It is tenderly nicknamed The Lover’s Sanctuary. I saw some of it from up on my trail.

After weaving my way through the splendor on the walls, two levels, daunting gates and secretive turrets, Matsuyama Castle at the peak looked more foreboding and untouchable than from the ground. All castles have this indomitable look. As bastions of defense and deterrence they can never do warm and cuddly.  But the view from the castle was serene, the Inland Seto Sea, Matsuyama and nearby regions safe from all marauders and enemy warlords.

Matsuyama Castle is actually special, not only because of its imposing three stories and vast grounds, but because it is an "original" castle, one of only twelve left throughout Japan. Built in 1603, much of what is seen is as it was since the last time it was changed around 1854. Not many castles survived like this, so relatively intact. Many succumbed, first to the end of the feudal regime, then the Second World War, not to mention the usual fires. Many were reconstructed using concrete, no longer the original wood and granite. Some castles are new born babes, like Hiwasa Castle which was built from scratch in 1964 to attract tourists.

1.The title came from Tennyson’s poem The splendour falls on castle walls.

2. To get on the Kuromon Trail, use the Castle entrance at the Ehime Art Museum. The tram stop is Minami-horibata. 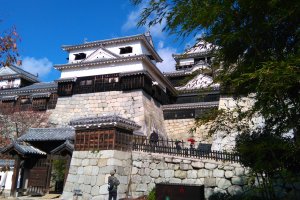 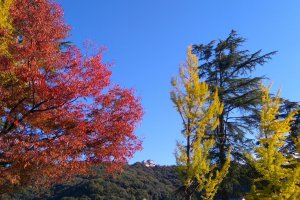 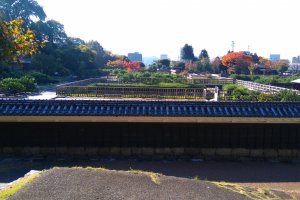 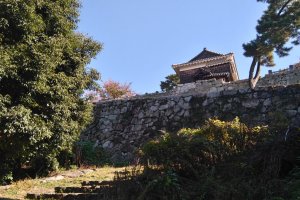 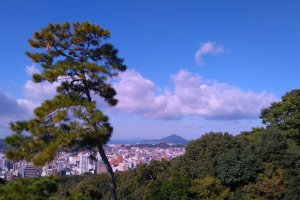 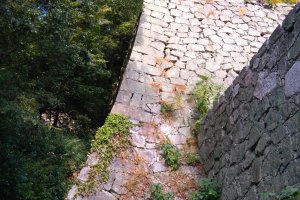