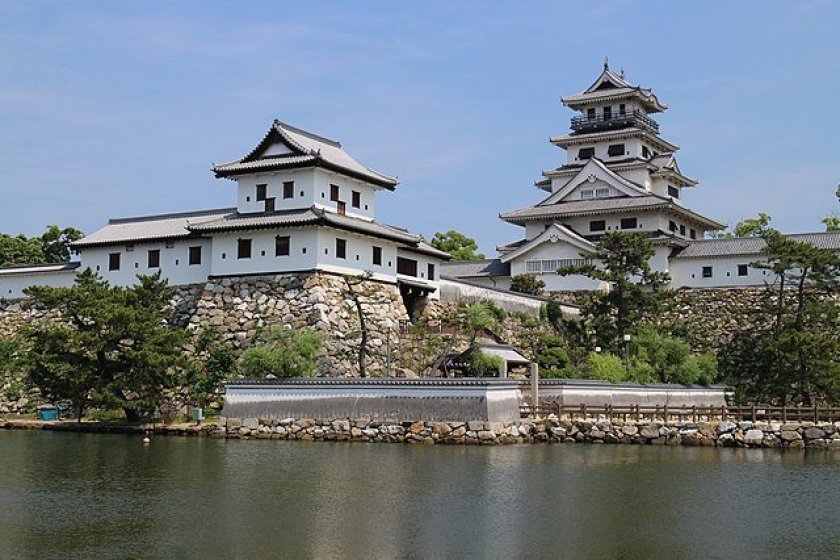 Historical sites with splendid views inside and out

Ehime, the westernmost prefecture of Shikoku, is evocative to Japanese ears. The name means “beloved maiden”, and she boasts the sacred Mount Ishizuchi and many other natural treasures, pearl fisheries, and abundant citrus fruit. Ehime is also home to exemplary original and meticulously reconstructed castles. From east to west, explore the castle heritage of this prefecture laden with history.

Shikokuchuo City on the Seto Inland Sea is a paper-producing center that is home to Sankakuji, one of the 88 Shikoku pilgrimage temples. It’s also the location of Kawanoe Castle which played an important role in the Warring States Period. The castle started as a fortified temple complex, became a center of Shikoku Island rule, and later a Tokugawa stronghold. A story associated with the castle commemorated with a stone marker “Himegatake” says that a princess of the castle, on learning that her father was betrayed, rode off a cliff on her horse. The reconstructed castle keep has excellent views of the Seto Inland Sea from the fourth floor. Kawanoe Castle is a 20-minute walk from Kawanoe Station on the Yosan Line.

Noted as one of only three Japanese castles with seawater moats, Imabari Castle in this industrial town famous for its towel production is a reconstruction in cypress, pine, and zelkova timbers. The museum within the castle has an armory with displays of swords, matchlock rifles, and armor belonging to the feudal lords. Imabari Castle is a 25-minute walk from Imabari Station on the Yosan Line.

Looming above Matsuyama City is Matsuyama Castle, a stronghold with formidable walls, winding passages to deter attackers, and strategic gates. The castle was constructed by a retainer of Toyotomi Hideyoshi in the 1600s. As one of the 12 original castles of Japan it stands as an excellent example of an Edo era fortification. Visitors can walk up the steep paths from Shiyakusho-Mae Station or take the tram or ropeway located on the east side of the castle site.

The four yagura towers of Ozu Castle have stood the test of time overlooking the Hiji River in this small town. The most remarkable structure on the site is the reconstructed tenshu, or main keep built of locally-sourced pine and hemlock lumber. Visitors can tour the interior to see the huge timbers, and within castle walls, observe matchlock rifle demonstrations and visitors can pose with an Ozu Castle banner. A combination ticket is available for the castle and nearby sumptuous villa, Garyu Sanso. Ozu Castle is a 25-minute walk south of Iyo-Ozu Station on the Yosan Line.

The diminutive Uwajima Castle overlooking the city of Uwajima on the Seto Inland Sea is one of the original 12 castles of Japan. It’s also the smallest castle you’ve ever seen - three stories with a tiny footprint perched on the top of a hill. Still, this castle built by the Date clan is a lovely lookout from which you can see Kyushu on a clear day. If you choose to stay in Uwajima City, you’ll hear at 9:00 p.m. the broadcast of the haunting folk melody “Uwajima Sansa” emanating from the castle. Uwajima Castle park is a 1-minute walk from Uwajima Station on the Yosan Line. 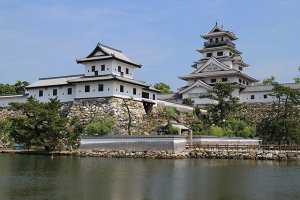 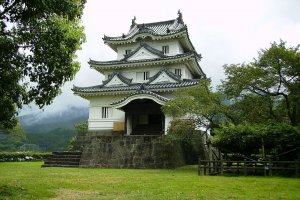 Bonson Lam 3 months ago
Matsuyama Castle reminds me of the design features of Nijo Castle, its squeaking floors warning that the enemy is approaching. I haven’t been to Ehime before and this is a great introduction to the castles there.
Reply Show all 1 replies

Elizabeth S Author 3 months ago
Matsuyama Castle is designed to make attack difficult with winding passages between the huge stone walls. Two of the gates are tricky - tonashimon, the no-door gate, and kakushimon, the concealed gate. It's a giant war machine, really.
Reply

Sherilyn Siy 3 months ago
My kids said, Ehime = castles. Must do a road trip to Ehime soon.
Reply Show all 1 replies

Sleiman Azizi 3 months ago
When the kids speak, we move!!
Reply

Kim 3 months ago
Uwajima Castle sure is cute!
Reply Show all 0 replies

Sleiman Azizi 3 months ago
That's a decent number of castles...
Reply Show all 0 replies
6 comments in total
Back to Contents