Just west of Fukuoka City is the Itoshima Peninsula with it’s prize beaches, hidden cafes, and specialty craft shops. To get a good overview, try the top of Mt. Kaya, the area’s most famous mountain.

Mt. Kaya, or Kaya-san, the symbol of Itoshima City, is easy to distinguish with its Fuji-like conical shape. It’s only 365 m high compared to Mt. Fuji’s 3776 m, though, and you can hike to its peak in less than an hour.

If you’re driving, the hike begins at Itoshima City Hall, a 30-minute drive west from central Fukuoka. While you’re there, check out the little store with a collection of items from local craftspeople. There’s plenty of free parking and bathrooms, but there aren’t any of either closer to the trail. The walk to the trailhead takes only about 15 minutes. Follow the road from the south end of the parking lot (facing the road, turn right) and go past the police box, then go straight west (right) into a quiet neighborhood. Walk with the curve to the left to the Moroyoshi Kominkan (community center), and take an immediate right on the road directly opposite its parking lot. Go uphill a bit past Unjo-ji (a small temple) and a dilapidated orchard toward the mountain. Near the end of the road, there’ll be a trail on the left and a sign pointing to the top (Japanese below) with the number 1850, the distance in meters to the viewing area. If think you’re heading the wrong direction, just walk toward the mountain and you’ll find your way. This is the Moroyoshi Route (trailhead at 33°34'28.60"N, 130°10'31.81"E).

The nearest train station (on the same rail as the Fukuoka City Subway’s Kuko, or Airport, Line) is Chikuzen-Maebaru. From there, it’s a 40-minute walk, a twice-hourly bus that runs from the station’s north exit to the aforementioned kominkan, or a taxi (about 1000 yen).

The hike itself is fairly easy (beginner-intermediate), well maintained, and well posted (in Japanese) though there are a number of stairs and steep areas that can be slippery when wet. A couple of benches line the trail, and the path is almost entirely covered in forest. On the way up, you’ll pass a nifty boulder (the upper part of the mountain was a source of superior building stone during the era of the Fukuoka Han) and Kanari Shrine. From there, it’s only a few minutes to the peak and the panoramic viewpoint.

A clear day at the top of this little Mt. Fuji is a sight very particular to Japan. Mountains, rice fields, urban sprawl, beaches, sea, and sun all come together. I love how there’s flat land, full of patterned rice fields—then mountains popping up all over. These Kyushu mountains aren’t very high, so they’re completely covered in forest and have beautifully textured shapes that contrast with the rice fields and urban areas.

Around the panorama, you’ll see the edge of Fukuoka City and the distinctive Fukuoka Tower to the distant east. Itoshima City lies to the immediate east. Shima-Funakoshi and its oyster huts sits to the southwest on the spit of land between Funakoshi and Hikizu bays. Along the coat, the prime Itoshima beaches Futami-ga-ura and Keya are visible from here along with several others.

If you wish to descend a different path, below Kanari Shrine the trail branches off to the south and goes down toward Route 54 and a large grove of 3000 ume (Japanese plum) trees that bloom in February. Watch for a sign for Kofujibarin (in Japanese) with the number 2500 in it (the distance in meters to the grove). 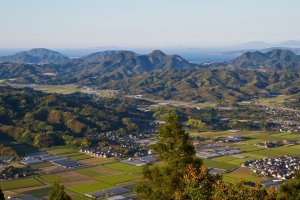 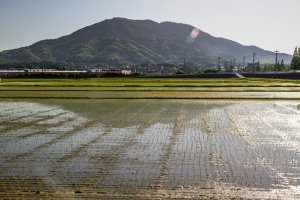 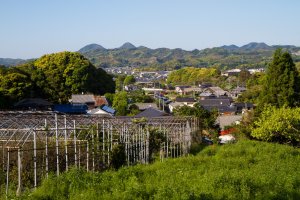 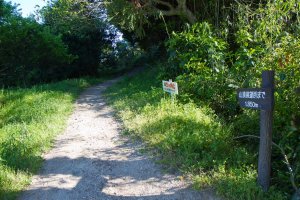 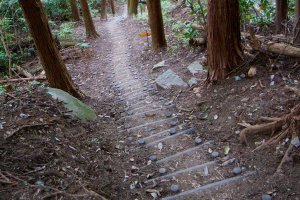 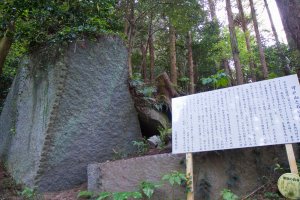 Jerome Lee 7 years ago
Amazing pictures! Great place to explore some beautiful scenery out of Fukuoka City itself!
Reply Show all 0 replies
1 comment in total