A taste of Britain without leaving Japan

Set deep in the forests of Hatoriko in Fukushima, British Hills is a sprawling, 600 acre resort established in 1994 as a place for Japanese people to spend time in an English-speaking environment without having to leave the country. As a British citizen, I was intrigued from the moment I first heard about it and so when my friend suggested we go for a visit, I jumped at the chance.

British Hills is forty minutes from the nearest town and getting there involves a long drive up a winding mountain road. I hadn’t realised quite how isolated the resort would be, but it really is in the middle of nowhere. Built 1000 metres above sea level, it shares a similar climate to that of the Scottish Highlands – which basically means that even in the height of summer, it’s a bit chilly. In winter, the whole area is covered in a thick blanket of snow, but nonetheless British Hills is open year-round.

The resort is supposedly modelled on the layout of a typical British village from the Middle Ages, with a collection of wooden-framed buildings clustered around a central manor house. I’m not convinced that the building style can be described as completely authentic, but clearly a lot of thought has been put into the details, right down to the red telephone box outside the village tea room.

British Hills is particularly popular with school and corporate groups, who come here to be taught English by native speakers. All of the teachers and most of the hospitality staff are recruited from commonwealth countries, which means that guests are exposed to English from the moment they arrive.

When my friend and I visited, the resort was eerily quiet as a large group of guests had just checked out. We popped in to The Ascot for an expensive pot of tea and some cake. As I settled myself down into a plump armchair and looked around the cosy tea room, complete with dark timber beams across the ceiling and a mini Union Jack decorating each table, I had the odd sensation of being caught in limbo somewhere between Disneyland and England.

Next, we browsed the shelves in Ye Shoppe, which sells a variety of British-themed souvenirs including tins of biscuits, tea and fudge. Whilst yen is the only accepted currency, the prices are labelled in both yen and pounds sterling, to add to the sense of being in a foreign country.

The manor house is a large and rather imposing stone building at the heart of the resort, although I thought it unfortunately looked a bit prison-like from the outside. We stepped indoors and found ourselves standing in a sumptuously decorated Victorian-style entrance hall, complete with an open fireplace and rich leather sofas.

According to the British Hills website, when guests first check in at the resort the staff will recreate the proceedings of passing through immigration at Heathrow airport. I’m not sure exactly how they manage to achieve this (usually stressful) effect in such opulent surroundings, but it definitely sounds interesting.

We decided not to pay to go on a guided tour of the manor house, offered by a Canadian staff member at the reception. Instead, we did the standard British thing and headed for the pub, which serves light meals and more than ten different kinds of beer. As there was nothing vegetarian on the menu, I made do with a plate of chips and reflected on the whole bizarre experience.

British Hills is a fascinating concept, and I’m sure that for Japanese people without the time or budget to take a trip to the UK, it is the next best thing and must make for a memorable stay. Personally, I found the whole atmosphere quite surreal. It felt a bit like wandering around on a film set for a period drama taking place in a somewhat confused era.

I was definitely not in England, but for a while I wasn’t sure that I was still in Japan, either. 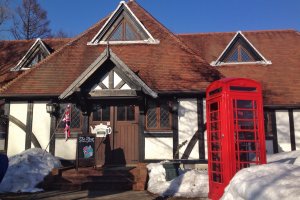 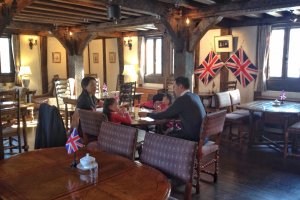 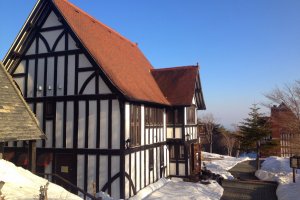 Kim 4 years ago
This place looks charming - I want to visit! A fun slice of Britain right here in Japan, it seems!
Reply Show all 0 replies

Elizabeth S 4 years ago
I teach junior high school students in a Tokyo area school, and my students have gone on trips to British Hills. They love it! They can indulge in their Harry Potter mania, and enjoy the English immersion experience. They return to school with a lot more confidence in their English ability, and apply themselves diligently. There must be magic there.
Reply Show all 0 replies

Sherilyn Siy 7 years ago
How cool is that they they have a red telephone box?! Love it!
Reply Show all 1 replies

Amber Mezbourian Author 7 years ago
I also liked the phone box! I'm not sure if you can make calls from it though ...!
Reply

Daniel Wolf 7 years ago
As an Englishman and a previous employee of British Hills I have much to say. However to be fair and unbiased I will say that living in Japan comes with a major culture shock, and at British hills you can escape the daily life of Japan.

Having a lovely range of beers, whiskeys, wine and spirits in the Falstaff Pub I was able to enjoy myself just as I was back at home in the UK.

Many things are over-the-top British stereotypical styled, such as actually having a Castle and an Ascot for tea and cakes.
However this does have a very nice a warm charm to the complex as I do enjoy a good Castle and I Love my tea.

There are many ways to experience parts of British life here at British hills, and I do recommend visiting for a short stay to say hello to all the friendly staff.

There are many beautiful sights to be seen as well as plenty to do.
Reply Show all 1 replies

Amber Mezbourian Author 7 years ago
Thanks for the comment, Daniel. British Hills must have been an interesting place to work! I agree it offers a unique way to escape life in Japan for a while, although I'm still not convinced about how authentically British it is. :-P It was nice to have some afternoon tea, though! I'd say it's worth a visit for anyone in the area, as it makes for an unusual day trip if nothing else.
Reply
6 comments in total