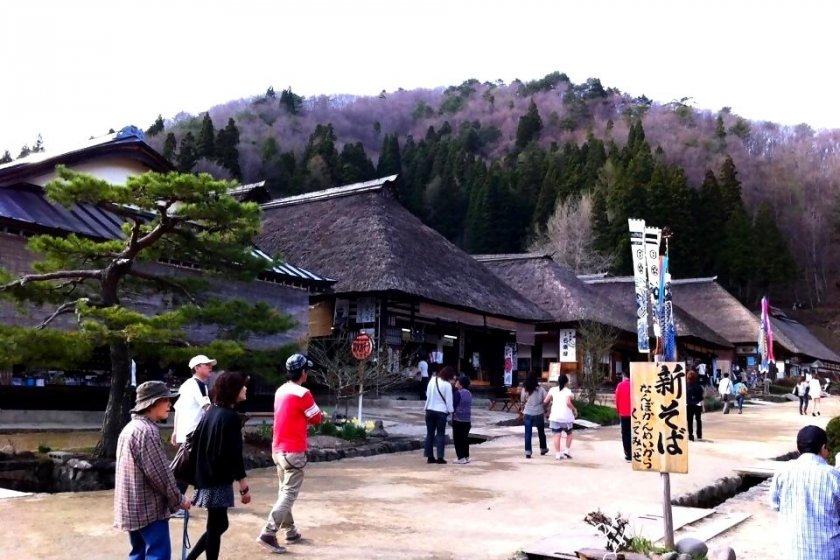 In this southern part of rural Aizu, there are few towns in which you can take a rest from the snaking, snow-roof covered roads which enable travel through this vast mountain range of Fukushima Prefecture. Today, clusters of grand onsen / ryokan (hot springs / traditional inns), perched on cliffs, sharp-cut by snow-melt driven rivers, can be reached by the patient driver. In the Edo period (1603-1868), for the traders who traveled immense distances on foot, Ouchi-juku was the only postal town in the area which supplied lodgings and food.

Today, Ouchi-juku appears just as it once did in the Edo period. The village consists of a wide, dirt, road lined with thatch-roofed restaurants, shops, and inns. It is flanked by misted pine-clad hillsides, often associated with the northern Japanese landscape.

All four seasons will reward you with a fantastic visit. Ouchi-juku is perhaps most beautiful in summer, when the locals splash the bright and dry, yellow road with bucketfuls of water, and lower crates of drinks into the narrow street canals to cool. Ouchi-juku in winter is also beautiful, beneath a clear night's sky untainted by ambient city lights and noise. Lanterns, which are sculpted from snow, radiate natural candlelight out onto the dozy street. Others may argue that the cherry blossom season, which runs from late April to early May, is when Ouchi-juku is at its finest.

A day trip can be plenty for a passing visitor, but you can also sleep the night. Shops sell locally made, traditional souvenirs such as woven-straw sandals, wooden gourds, and plenty of rich, homegrown ingredients like nuts and dried tofu. Restaurants serve the local soba specialty which is served with a spoon made from leek (good luck, folks).

Many of Aizu's most esteemed onsen, which are themselves worth the journey, are nearby.

Take the train to Yunokami Onsen Station on the Aizu Line. After which, take a taxi for 15 minutes to Ouchi-juku, which will cost about JPY 2,000. You can also drive to Ouchi-juku's Shimogo Town, 20km outside of Aizu-Wakamatsu.

Yunokami Onsen Station is the only railway station in Japan with a thatched roof. Along the line are flowering cherry trees which liven up the atmosphere of the station in the spring.

Find out more about Ouchi-juku. 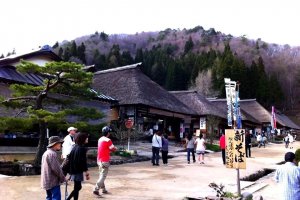 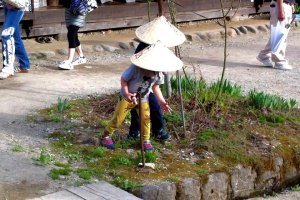 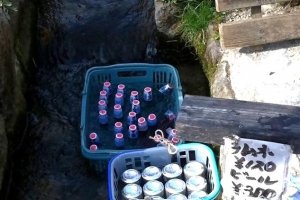 Elena Daurtseva a year ago
Looks like a very small town, but very authentic
Reply Show all 0 replies

Justin Velgus 7 years ago
Wow, a staton with a thatched roof?! That is just the warm up for this adventure!
Reply Show all 0 replies

Avery Morrow 8 years ago
Thank you Steph! I'm planning a trip to Fukushima and this looks like a great spot.
Reply Show all 0 replies