A picturesque temple in any season

Rakuhoji Temple, located on a mountain ridge above Sakuragawa City, is popularly referred to as Amabiki Kannon, the rain-drawing goddess of mercy, which it houses. This temple, founded in the year 588, is noted for its picturesque setting, architecture and statuary, and the gardens which spill down the ridge.

The temple’s two notable treasures are a tahoto, a two-story pagoda form found at Shingon and Tendai Buddhist temples, designated as a prefectural tangible property. Within the temple itself, is a 1500 year old Kannon statue, a national treasure, for which the temple is named. This statue is a “hibutsu”, or hidden Buddha, revealed once a year on the first Sunday in April.

Several times a day, the Shingon Buddhist monks walk from their living quarters along a wooden walkway to the main sanctuary where they recite sutras, strike drums, and say offices for parishioners. The procession of monks in their flowing robes, the rhythm of their wooden clogs on the walkway, followed by the powerful chanting, are the highlights of the temple’s life.

The spring and early summer are ideal seasons to visit Rakuhoji. In late March and April, the temple architecture and the mountain ridge become even more enchanting as the cherry trees burst into bloom. Although the Hanami, or cherry blossom viewing, is superb, the temple is better known as a destination for appreciating ajisai, hydrangeas, which are at their best in June and July.

The garden, landscaped with pools, waterfalls and statuary, is also home to a variety of tame birds. Chickens, ducks and peacocks roam freely over the grounds. The peacocks, with their spectacular plumage, perch wherever they please, and are tame enough for visitors to approach closely.

There are a number of ways to get to Amabiki Kannon. The easiest is to drive 35 minutes from neighboring pottery town Kasama City. Tsukuba Rin Rin Road, a cycling and walking path running from Iwase Station in the north to Tsuchiura Station to the south, and passes by the temple. The route takes 30 minutes by bicycle, 90 minutes on foot. Another route is the Kanto Fureai Michi, a walking trail between Iwase Station on the JR Mito Line to the peaks of Mount Tsukuba. Amabiki Kannon is about 400 meters along the trail which passes by waterfalls and rest stop lookouts.

By car, Rakuhoji is 55 minutes from central Tsukuba City along Prefectural Route 41.

By taxi from Iwase Station on the JR Mito Line, it is 10 minutes (taxi fare approximately ¥2000).

By bus from Tsukuba Center bus station to Amabiki Kannon bus stop is 1 hour and 40 minutes. 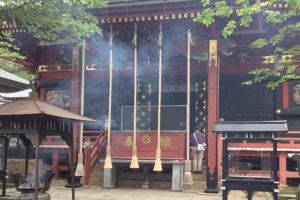 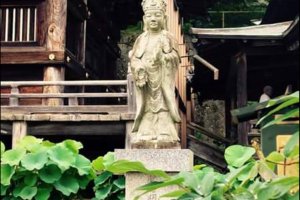 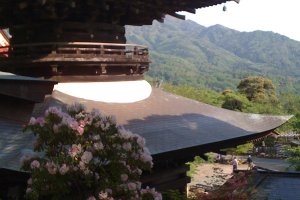 Elizabeth S Author 2 years ago
The temple stimulates all the senses. On the approach from Iwase Station (from which I usually walk to the temple, about 90 minutes), you might hear masses of bees, peacocks crying, the scents of all kinds of flowers in the satoyama landscape. You know you’re nearly at the temple when you smell the incense.
Reply Show all 0 replies

Bonson Lam 2 years ago
The photo of the incense wafting in front of the temple is particularly evocative. Thank you for telling us about this special place.
Reply Show all 0 replies
2 comments in total