A thousand cherry trees to enjoy in Kagoshima

Each year during spring, Kagoshima's Tadamoto Park pops with color thanks to an impressive 1000 cherry trees on the grounds. In fact, the park is so well regarded for its beauty that it was listed as one of Japan's Top 100 cherry blossom viewing sites. A sakura festival takes place when the trees are in bloom, which tends to be around the late March to early April timeframe.

For those who can't make it to the park during daylight hours, the trees are illuminated after dark, creating an entirely different atmosphere.

Like all flower events, the dates can be subject to some fluctuation from year-to-year depending on blooming conditions. To ensure you plan a visit when the blossoms are at their best, keep an eye on the official city website for updates closer to the season.

Kagoshima's Tadamoto Park can be accessed within about 50 minutes via the airport limousine bus from Shin-Minamata Station, served by the Kyushu Shinkansen Line.

Alternatively, for those who plan to drive, parking is available on-site. 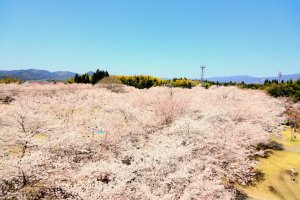