A Tour with a Difference: Oyama’s Cultural Heritage

Travel is most rewarding when you dive into the local culture

The path to Oyama Afuri Shrine

It’s a crisp late autumn Sunday morning as I step off the cable car, with panoramic mountain views unfolding before my eyes. As far as mountain pilgrimages go, it’s so far been a pretty good start — the weather gods are on our side and the cable car approach means I avoid a strenuous hike starting in the cold, early hours.

Our vantage point overlooks Kanagawa’s Shonan area, with impressive views of Sagami Bay and Enoshima on the horizon. Michelin are impressed too, which has introduced them in their Green Guide. We’re deep in the Tanzawa mountains of Isehara, half way up Mount Oyama and around the corner of one of the region’s most revered treasures, Oyama Afuri Shrine (大山阿夫利神社).

Talking of ‘weather gods’ is a good starting point, as it comes to explain the origin of the mountain’s significance. Mt. Oyama was traditionally worshipped since ancient times by local farmers, who called it Afuriyama (“rainfall mountain”). The name Afuri (derived from Ame ga furi – “rain falls”) may be known to fans of a certain popular brand of yuzu ramen, but interestingly the region's same natural water helped give birth to that very recipe.

Oyama Afuri Shrine (or Afuri-jinja Shrine) grew in popularity back in the 18th century, during the Edo Period (1603–1857).

Not only was Oyama seen as a rainmaking deity and that could bring fortune and prosperity (thanks to growing rice yields), it also became a spiritual escape from the cities.

Back then, pilgrimages to Mie prefecture’s Ise Shrine were common but in reality, the distance was a little too far for those embarking from Tokyo. As a result, Oyama Afuri Shrine became a popular alternative and people began to pilgrimage here and the Oyama-mairi was born.

Further adding to its popularity, it is said that the samurai, Minamoto Yoritomo, offered his sword which gave birth to the “Osame-dachi” tradition of sword offering. This itself inspired pilgrims to bring their own wooden sword replicas—of ever increasing size—along for the journey… you can see what I mean in the following picture!

Before we dive deeper into what makes Oyama special — it’s important to explain why we’re even here, because chances are there will be many similar incredible experiences just waiting for you around Japan (when you get to visit — for those overseas).

Our tour, “Pilgrimage Experience and Shamisen Concert, Isehara,” is one of a lineup thanks to the Japan Cultural Expo — a multi-year celebration of Japan’s traditional cultures and performing arts that originally was devised to complement the Tokyo 2020 Olympic and Paralympic Games. Read more on the JCE later in this article.

Each event aims to bring Japan’s traditional culture and performance arts to life through real, live experiences that can be felt and interacted with by participants.

For today’s tour, I not only get to enjoy a stellar lineup of activities and performances—including shamisen and an interactive Noh experience—but also get much closer to each experience than I could imagine would be typically possible. This is the very essence of the Japan Cultural Expo.

Restaurants along the way serve Oyama tofu cuisine, as well as another local classic of inoshishi nabe (wild boar stew).

Once we reached the cable car summit, we sat down to lunch at Sanshuden Lounge. When in Oyama, trying the local tofu is a must-do and the tour organisers did not disappoint, with a tofu-themed course of locally-prepared, healthy tofu-based dishes awaiting.

From a tofu-based burger and Hiryuuzu-style fried tofu/vegetable ball to a serving of Goma (sesame) tofu, our group got to taste the essence of Oyama, while the Chief Priest of Oyama Afuri Shrine, Meguro-san, introduced us to the region’s history. It’s here where we don authentic pilgrimage garb and learn about local Ko religious groups.

The tour group is transported into Oyama Afuri Shrine’s main premises, the Shimosha, an auxiliary lower shrine within easier reach than the main (but smaller) shrine at the mountaintop.

Here we watch a children’s ritual dance, performed by local elementary school children. We see a Yamato-mai dance (a style of Kagura-mai) said to be derived from performances at Kasuga-taisha in Nara Prefecture during ancient times. These dances are said to be popular with Oyama’s Ko groups and were basically performed to please the Gods — ‘Kagura’ derived from the phrase, ‘Kami ga tanoshimu’ (Gods enjoy).

The dance itself follows the shrine’s priest formally inviting us to take part in a formal blessing and traditional prayer session.

The group shuffles into another part of the inner shrine, where professional shamisen performer, Kineya Katsujuro, invites us to hear his live renditions of several shamisen styles, including Tsugaru-shamisen (originating from Aomori) and nagauta (often used in Kabuki theatre).

So close to the stage, the acoustics and skill on display are incredible. In addition, Katsujuro-san takes the time to explain each piece as well as its history and style. Like with all the explanations on the tours, an interpreter is also hand to help the tour group understand exactly what they are seeing and hearing — helping further bring them ‘in’ to the experience, and not just feel like spectators on the sideline.

Oyama's cable car line actually stops halfway up the mountain, serving the shrine's ‘little cousin’ at Oyama-dera Temple. Back during the Meiji Restoration, the government ordered the separation of Shintoism and Buddhism, forcing the temple to relocate to this lower, more secluded location. Nestled deep in the inner sanctuary of the temple, we could find a cast-iron statue of Fudo Myoo — a God of Knowledge.

The final stop on our route is the shrine’s very own Noh Theatre, which is located further down the valley, after taking the cable car back down to Koma Sando.

Noh culture arrived in Oyama during the Edo Period, which developed its very own Kanze-ryuu style. Oyama became a centre of Noh theatre as its popularity and trend of Oyama-mairi pilgrimages grew.

After a special introduction to the art form (which some may know hit the big screen as antagonist Safin’s mask in No Time To Die — the latest in the James Bond franchise), Meguro-san invites us to enter the Noh stage itself after changing into tabi socks.

The architecture alone is a breathtaking work-of-art with the Japanese cypress-built stage constructed of three ‘main’ areas: the hashi-gakari bridgeway, the rear Ato-za area and Hon-butai (main stage) itself.

In addition to this, Oyama’s theatre goes further — being built over a pond, the Koi carp get a front-row seat with audiences seated outside during performances (like the Oyama Himatsuri Takigi Noh held every October). This is a traditional, authentic setting such performances, which saw a more modern indoor-style emerge after the Meiji period.

Inside we learn just about everything imaginable — leaving me come away with a newfound respect for the artform and everything Noh imprinted on my mind.

Meguro-san delivers an acoustic vocal rendition of Noh-style speaking and singing — the power of his voice reverberating around the stage.

We learn about the basic foot movements of Noh practitioners, including a sliding step that performers use to move around.

After trying on some replica masks and costumes, it is easy to why they move this way.

Vision is heavily restricted when in full garb, so closer contact to the floor helps actors navigate the stage. Sliding across the floorboards—with their distinctive edges and boundaries—tactilely tells the actor where they are at any time.

As we also learn when Meguro-san shows us some authentic Noh masks—dating back hundreds of years—sliding also helps control the actor’s posture which is often vital to Noh storytelling.

Tilted down, a Noh mask can express sadness, loss or regret, whereas tilted up they can suddenly appear joyful, or full of optimism and hope.

These treasured cultural assets quickly show some serious skilled craftsmanship when you consider the attention to detail needed to convey such subtle shifts in emotion under different lighting conditions and angles.

Add to this their durability and ergonomic design to fit performers who would wear these at length during performances, I came away feeling truly honored to get so close to these precious artefacts and have their provenance explained by a local expert.

Of course, tour participants couldn’t hold these particular masks ourselves but nor would we have wanted to — their quality and condition should be safe-guarded to better preserve for years to come. It is through these treasures that younger and future generations can be inspired to discover Japan’s traditional arts and carry the knowledge forward to protect both the artform and its techniques. This is surely another goal of the Japan Cultural Expo for both Japanese people and international audiences alike.

What is the Japan Cultural Expo?

The Japan Cultural Expo is a nationwide celebration of Japan’s art and culture, encompassing traditional and contemporary art exhibitions, performing arts and festivals that showcase the beauty and essence of Japan.

The overarching theme of the expo is ‘Humanity & Nature in Japan’ which summarises Japanese people’s connection with nature, something easily seen across all facets of daily life. Take the distinct seasons themselves and their influence on the arts, or traditional cuisine’s use of seasonal ingredients, or wooden architecture that blends the outdoors with indoors.

Originally launched the year before the Tokyo 2020 Olympic and Paralympic Games
and now scheduled to run until March 2023, the expo has seen government, public- and private institutions join forces to promote Japan’s art and culture heritage through a series of events and activities.

With the emergence of the Covid-19 pandemic, the programme has adapted in several ways to remain true to its original goals. As well as new safety-first hygiene measures to help ensure events take place as intended, an online version of the expo was also launched.

This VIRTUAL PLATFORM—which you can read more about in our in-depth article— provides an interactive, online space for users to discover and learn about Japan’s arts and cultures like never before. This is helping international visitors—many of whom could not visit Japan in 2021—reconnect with Japan’s arts and culture virtually.

The tour event held at Oyama was part of the NOBODY KNOWS programme of events — one of many sub-projects taking place under the wider Japan Cultural Expo umbrella. In my mind, the activities hosted at Oyama summed up perfectly what the Japan Cultural Expo is trying to achieve in one key way: experience.

Read more about the Japan Cultural Expo or visit the official website.

Instead of watching or simply enjoying these arts, we can better ignite a passion and appreciation for such arts by providing opportunities for interaction and participation. In Oyama, tour participants could ‘join’ a real Oyama-mairi pilgrimage, try Oyama tofu, see rare sacred dance and shamisen performances, interact with objects/costumes and ‘try’ Noh for ourselves.

My only regret would not be taking the hiking trail earlier in the morning! With a two-star Michelin Guide viewpoint waiting though, it won’t be too long before I’ll be heading back.

For those interested in visiting Oyama Afuri Shrine, it is easily accessible from Tokyo.

From Shinjuku Station: take an Odakyu Line train bound for Odawara (Rapid Express / 56 min) and alight at Isehara Station. Switch to a local bus (伊１０) for a 30-min ride (320yen) to the Oyama Cable Car area. The last stop drops you at the Koma Sando street, from where it’s a 10 min walk until the cable car ticket office. 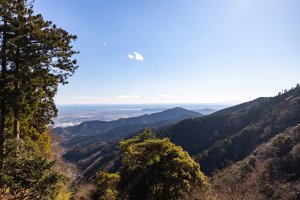 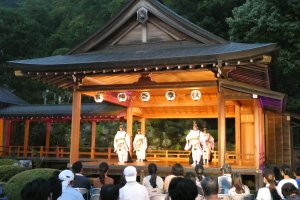 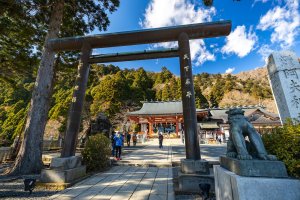 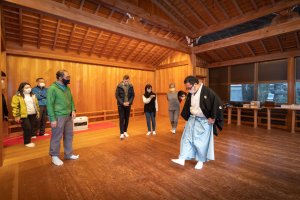 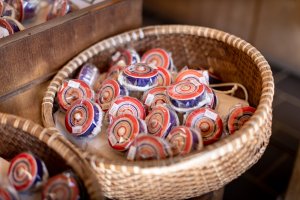 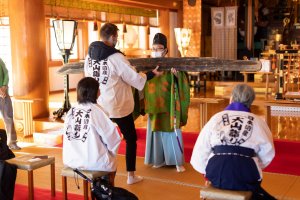 Sleiman Azizi 2 months ago
The Oyama Noh Theatre is something new for me. An excellent find!
Reply Show all 0 replies

Kim 2 months ago
Gorgeous photos in this article!
Reply Show all 1 replies

Bonson Lam 2 months ago
I thought the same thing, the photos of Noh masks make them look alive.
Reply
4 comments in total