Only an hour and a half outside Tokyo lies the Kamakura coastline. The area has fully adopted the "beach vibe" where the pace is slow and the atmosphere is beyond relaxed. As well as many opportunities for watersports, Enoshima Aquarium is there to welcome you into their underwater wonderland.

In 2019, from 13 July until 31 August, Enoshima Aquarium is holding a special evening event called "Hikari Enosui". The aquarium opens its doors to the public in the evening between 18:00 and 20:00 to host special illumination shows that are best enjoyed in the dark.

There are multiple shows and activities to be enjoyed. The jellyfish room features projections and illuminations that turn the jellyfish into beautiful fluorescent creatures.

Before visiting an evening dolphin performance, you can enjoy an illuminated cocktail or soft drink on the deck overlooking the sea.

The aquarium features a large tank that is home to many different types of aquatic wildlife such as rays, sharks, various fish, and eels. A couple of times a day a diver goes in and showcases the fish. Despite being underwater, he is equipped with a microphone and is able to talk to the audience as he swims through the tank. In the evening, he dives in the dark. With only a headlight to guide him through the darkness of the water, he maneuvers through the rocks to find the animals he wants to show. The tank features two large screens that are connected to his camera so the audience gets to see exactly what he sees.

Enoshima Aquarium has plenty of activities that are exciting for young and old alike. There are numerous shows and, for a small fee, you can participate in feeding some of the animals. The discovery center lets you touch various fish and rays. All the signs are English friendly but the explanations given by staff, including the diver and dolphin trainers, are exclusively in Japanese. There are an abundance of restaurants around the aquarium that serve fresh seafood; and for those who shy away from raw fish there are plenty of other options.

Hikari Enosui would make a perfect end to a day trip. Explore Kamakura or Enoshima Island during the day and visit the aquarium in the evening. Let go of the idea of aquariums being daytime activities, they are even more exciting in the dark.

The aquarium is clearly marked so you can follow the signs from the station. To get there, take the monorail to Shonan-Enoshima station or the train to Enoshima station. From there, head south towards the sea and cross the Katase river to the right. The aquarium will be on your left hand side. Alternatively, you can take the Romance Car to Katase-Enoshima station, which is only a 3-minute walk from the aquarium.

Currently a marketing associate at Japan Travel but in my free time i'm a self proclaimed ramen connoisseur, flexitarian and film photography fan 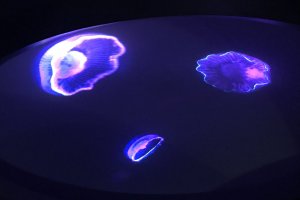 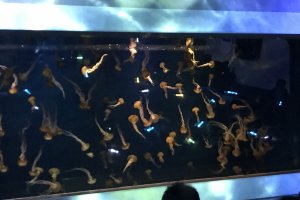 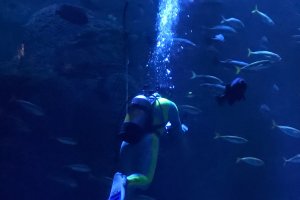 Sleiman Azizi a year ago
We recently visited Enoshima but never thought to stop by the aquarium there. The kids love aquariums so we may head back there soon.
Reply Show all 0 replies

Elizabeth S a year ago
Watching illuminated jellyfish is hypnotic. The night aquarium is a great way to wrap up a day at Enoshima.

Sherilyn Siy a year ago
We had a memorable time here. The dolphin show was thrilling.
Reply Show all 0 replies

Kim B a year ago
My children would love it here!
Reply Show all 0 replies
4 comments in total