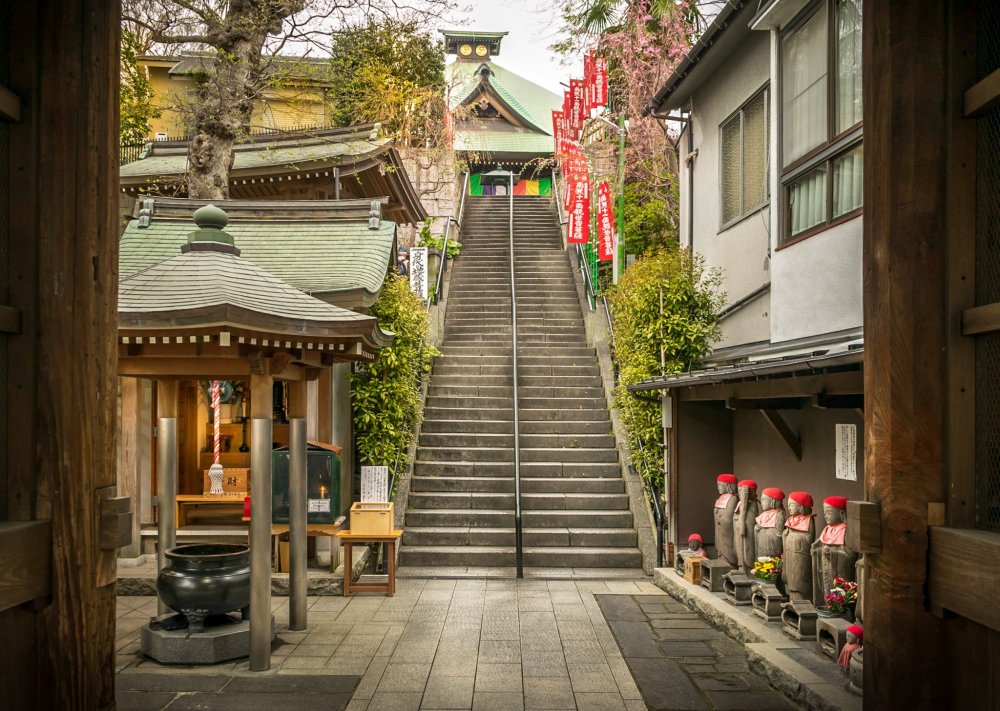 The front entrance, otherwise known as the Nioumon gate 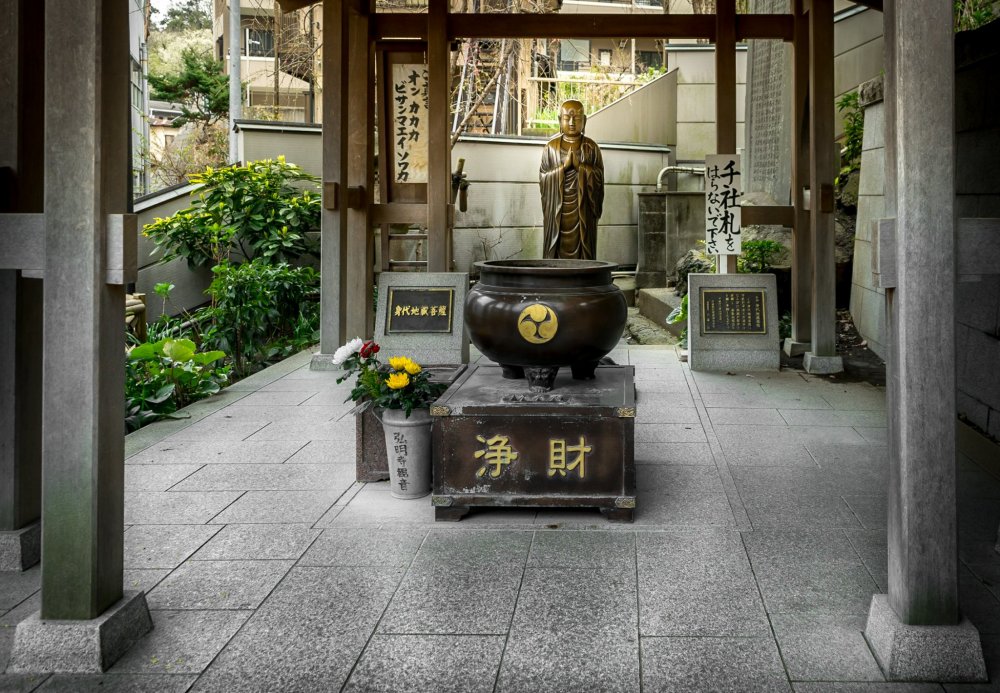 As you ascend the main staircase, you will see this statue of Migawari Jizo Bosatue on the left. Legend has it, if you stroke its body you will be cured of any illness 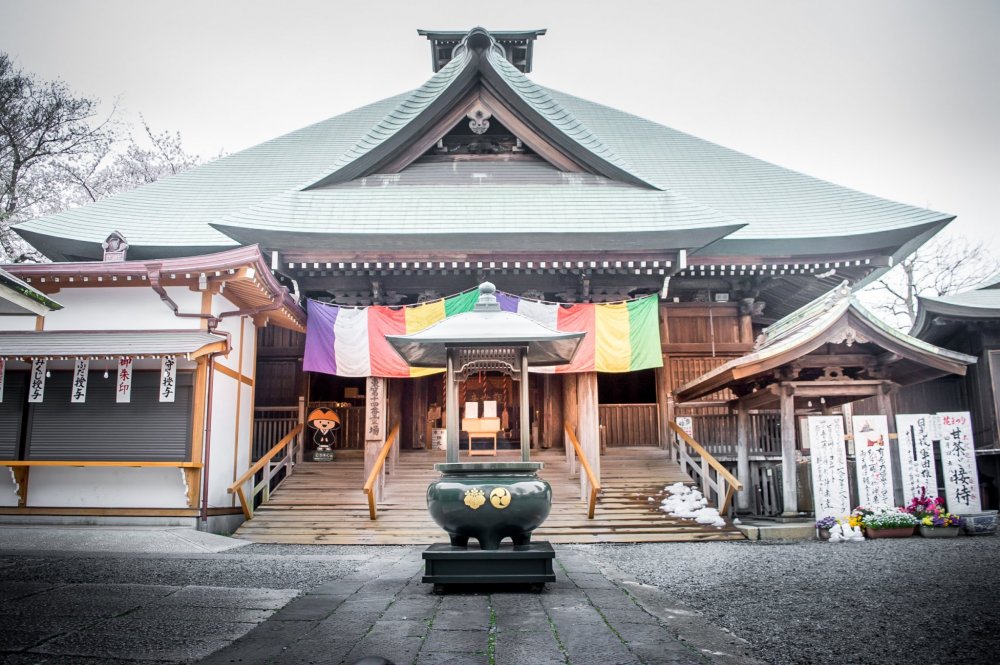 The main temple awaits visitors at the top 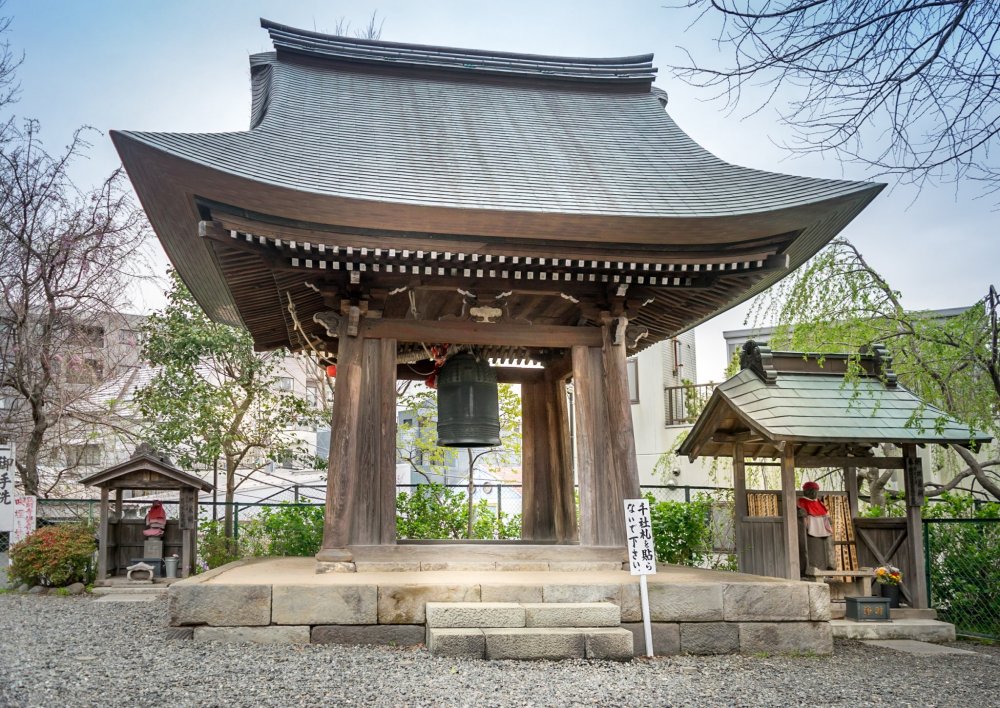 Within the courtyard is a picturesque bell-tower 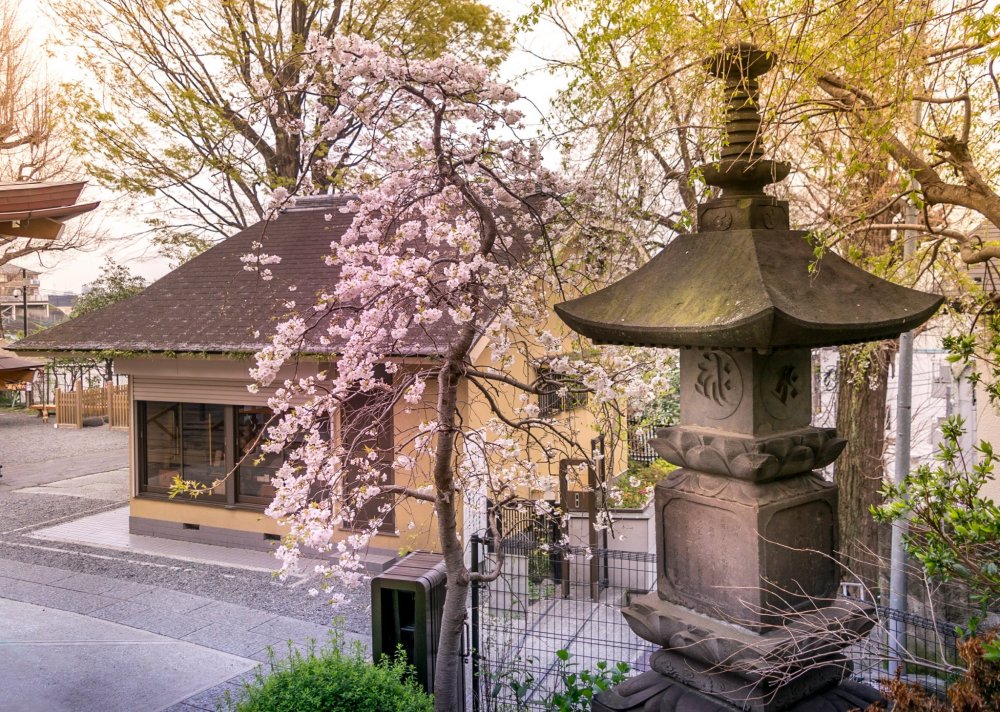 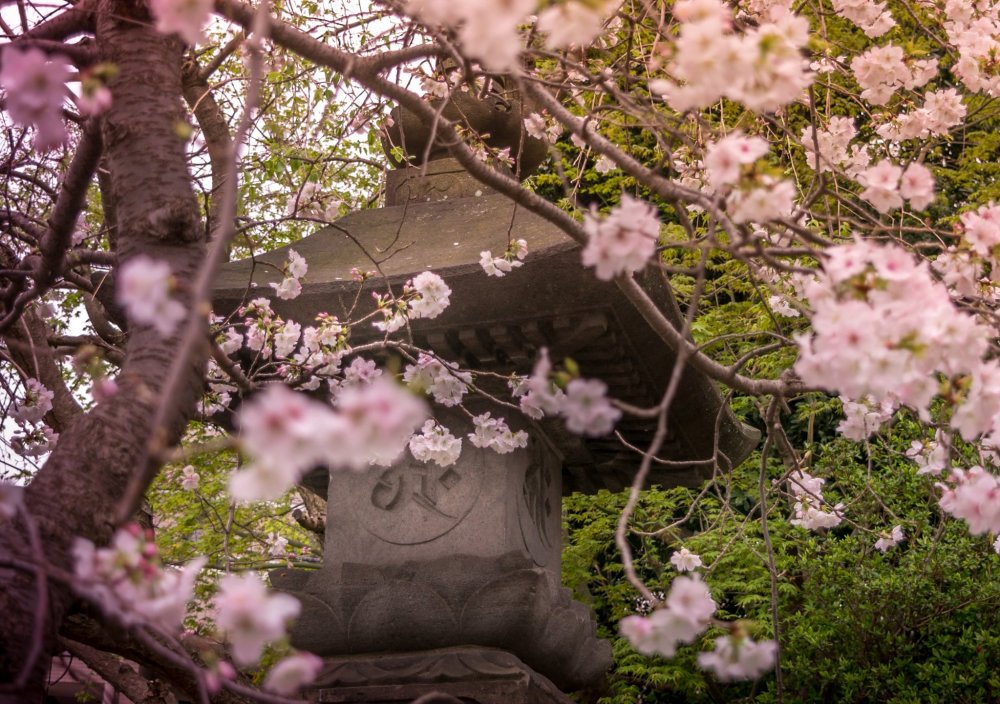 The colorful cherry blossoms contrast well with this pagoda 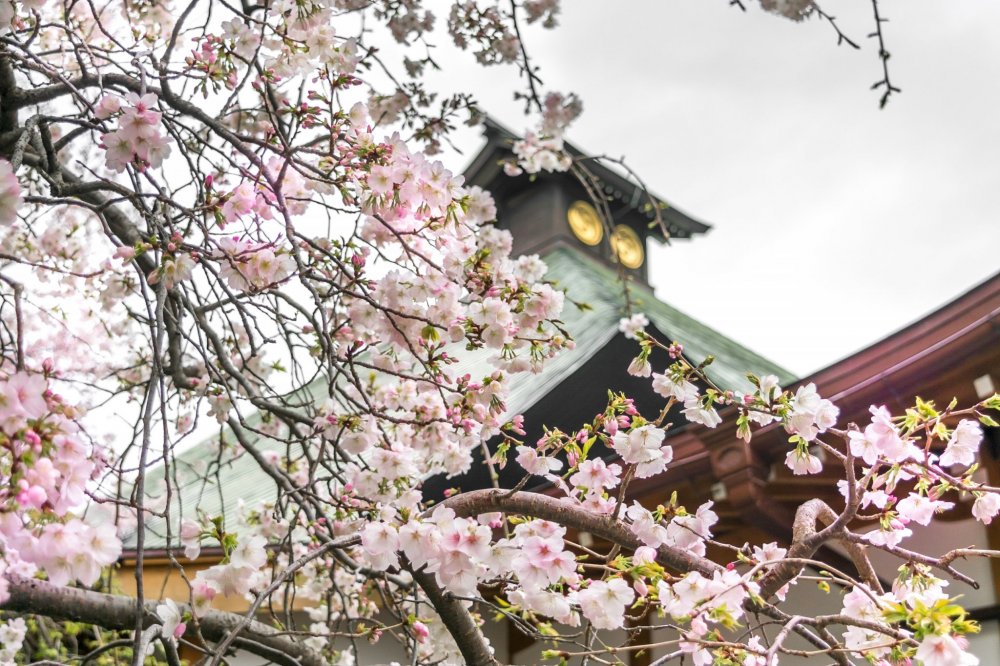 Perhaps by next week, these colorful flowers will be gone 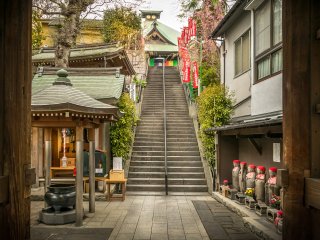 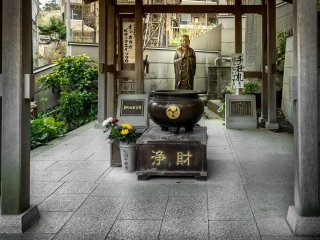 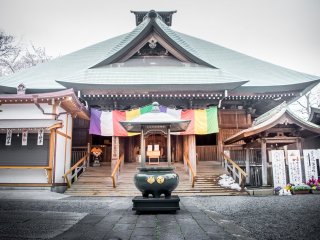 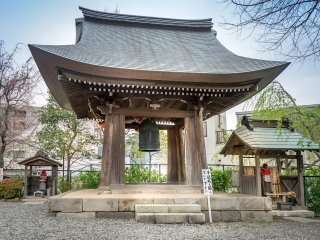 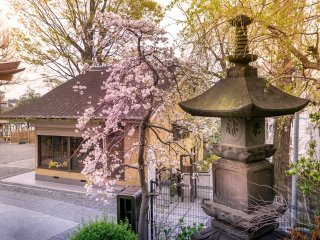 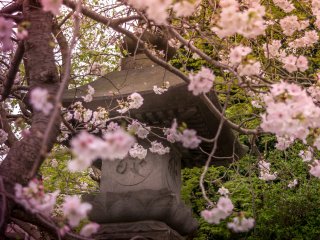 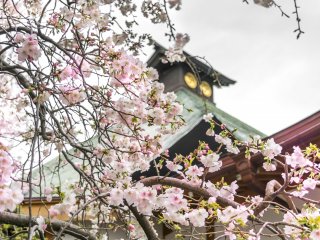 For many people, Yokohama is a place that has successfully transformed itself from being a small fishing village to becoming Japan’s second-largest city in barely the space of 130 years. Within this bustling metropolis, both locals and visitors alike, cannot help but show their amazement at how this city’s ever-changing landscape is always pointing in one direction – towards the future! While progress is usually a good thing, there are still some beautiful places within this city where you can enjoy the “old Japan”. One such place is Gumyoji Temple.

Located within a relatively busy albeit, low-key residential shopping street, Gumyoji Temple is one of the largest and oldest Buddhist temples in Yokohama. According to ancient legend, it was originally founded in 721 (during the Tenpyo Era), and established by an Indian Monk.

Following on from this, it is said that this temple was later officially opened on the 10th of March 1044, and is believed to have been built by a ‘Saint’, (although most likely, a local Shogunate or high ranking official), by the name of Ken Hiroshi. Similar to most other historical buildings in Japan, Gumyoji Temple has undergone numerous periods of reconstruction however, many of its original artifacts, dating back to the Heian Period (794-1185), have been utilized throughout its long history. This includes its famous wooden Kannon (Buddhist statue), which has been designated ‘an important cultural asset of Japan’.

After learning about this temple, I decided to visit at the end of March in the hope of seeing some colorful cherry blossoms. However, similar to countless other occasions, my timing was off since many of the trees weren’t yet in full bloom. Although slightly disappointed by this fact, Gumyoji Temple proved to be a great source of inspiration and is well worth visiting any time of the year. One of the reasons for this is because it presents a refreshing oasis of history and tradition, within a landscape which seems to have become very devoid of these very things.

Gumyoji Temple is about a 5 minute walk from Gumyoji Station, located on the Keikyu Line and is 6 stops from Yokohama. It is also possible to access via Gumyoji Subway Station (Blue Line), although it’s a longer walk

Elizabeth S 9 months ago
I like the colors you captured in the photo of the stone stupa - trailing pink blossoms and the chartreuse trees in the background.
Reply Show all 0 replies

Sleiman Azizi 9 months ago
I enjoyed that first photo with its 'secrets at the top' kind of vibe to it!
Reply Show all 0 replies
4 comments in total

Elizabeth S 9 months ago
I like the colors you captured in the photo of the stone stupa - trailing pink blossoms and the chartreuse trees in the background.
Reply Show all 0 replies

Sleiman Azizi 9 months ago
I enjoyed that first photo with its 'secrets at the top' kind of vibe to it!
Reply Show all 0 replies
4 comments in total