There are plenty of beautiful parks and gardens filled to the brim with cherry blossoms during spring, but if you're after a drive-thru sakura viewing option, the Yunoko Cherry Line in Kumamoto is worth your while. The cherry line is a 5 kilometer stretch of the Yunoko Coastal Road which is packed with around 500 Somei Yoshino cherry trees, and it's such a stunning destination that it has been designated as one of Japan's Top 100 cherry blossom viewing spots.

For those who want to stop their drive and pause to admire the spectacular scenery, there are a limited number of parking spaces at Osakihana Park and Wadamisaki Park which are along the route. The best time to enjoy the sakura is typically from late March to early April.

The Yunoko Cherry Line is located around an hour and a half drive (90 kilometers) from the central Kumamoto City area. If you're visiting via public transport, the closest station to the area is Tsunagi Station on the Hisatsu Orange Railway line. 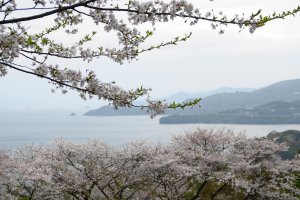