Commemorating the origins of Japan

Are we connected on a deeper level? Does mother nature shed a tear? Since ancient times, people have looked around them with wonder, and in Japan, their thoughts are often grouped under the umbrella loosely called Shinto. Shinto is so deeply connected with nature, and so much so that for millennia, priests and priestesses have tapped into the rhythms of nature, calling out for healing or in anger.

The Japanese have a respectful relationship with nature, a deep connection with the oceans and mountains as if they are calling out to them. This rich tradition gives rise to myths and legends, of stories like Spirited Away, where trees and foxes take on human qualities.

More than many places, Japan is a land of fire, water, and air, their animated nature giving rise to its personification, in the form of the wind and fire spirits.

Before Ise, there was Motoise. Motoise, or the origin of Ise, tells the story of the tumultuous founding of Japan, long before the Ise took over as the Grand Shrine of Japan.

According to the ancient chronicles, the turbulent deities of the sun and moon gave birth to Japan, before leaving its inhabitants to look after the archipelago that have been plucked from the deep. The priests sought connections between the celestial and mortal, conveying the voice of the unseen. They translate its voice into human words. The verdant forests and sandbars that surround Motoise Shrine breathe to the rhythm of this creation story, and so the pilgrimage over the sandbars of Amanohashidate, is just as important as the shrine visit.

In a time when people are uncertain about the future, and what the forces of nature have in store, let us drink deep from their sense of reverence, of being one with the land and the seas.

In Japan, the earliest shrines were just sacred nature spots that are marked off with a rope. Even today, in places like Sefa Utaki, there are areas that are left to their natural state. Hyakuna Garan, which means 100 natural cathedrals, is an attempt to discover the divine in a place that is entirely natural, devoid of any human distractions. There is healing in the forests and mountains, whether you are forest bathing, or soaking in a natural hot spring, or in the waters of the sea.

This shrine today is a place to be still, and be surrounded by the elements of nature, fire, earth, and air - elements represented in the sun, rocks, and trees. The trees are an expression of air, vessels that give oxygen to the world. It is no wonder that washi, which enshrines the veins of the mulberry tree, is an expression of reverence that the Japanese have for nature.

Take the old school restored Matsu train from Fukuychiyama, departing several times daily. From Motoise Shrine, why not continue your way to the sea, where you can stay at the boathouses that hug the shores of Ine Bay. 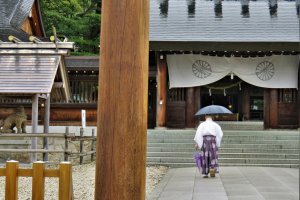 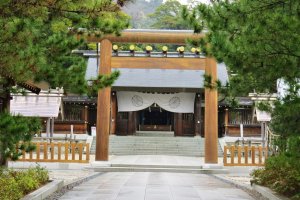 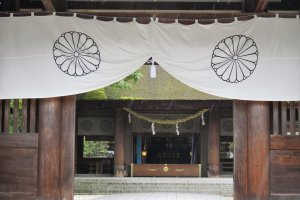 Sebastian Schuster a month ago
I had a nice talk with a Japanese guide in the Fuji Yoshida Area and he explained me Shinto in the following way:

He said that for him, shinto is not a religion, shinto is more like a part of the Japanese lifestyle. Not everyone knows a lot about shinto and its barely teached in school. But the people follow the ancient traditions untill today without a book as a guideline like the bible of the Christians. We had a courteous discussion and we agreed both in saying, it is more in believing in the physical world around us and the nature, that believing in someone that will guide us.

Im not a religious or spiritual person and i think i will never be, But living in japan and just visiting shrines and follow some customs made me feel better. And i think thats what many people here in japan also think. Visiting a religious place is about showing respect, calm down, and focus and be grateful
Reply Show all 5 replies

Bonson Lam Author a month ago
Thank you for your thoughtful words and your reflections. It is great that we can have these discussions in a peaceful and respectful manner. I feel the same way when I meet Japanese people on my trips, though of course don't want to generalise either.
Reply

Sebastian Schuster 4 weeks ago
Im always happy to have a nice talk about other customs but also religious believes. I do not have to believe in anything. If i have an open mind, even just listening to people and how they live can be great for your own life.
Reply

Bonson Lam Author 3 weeks ago
Thank you. We are all explorers and sojourners on this beautiful and fragile planet. You reminded me of a quote from TS Eliot, who said "The end of all our exploring will be to arrive where we started, and know the place for the first time"
Reply

Sebastian Schuster 3 weeks ago
A wonderful quote, thank you for sharing it :)
Reply

Bonson Lam Author 2 weeks ago
You're very welcome. Sometimes I feel that there is a sense of longing, of connection, when we are still and listen to the heartbeat of nature. It is like a veritable Garden of Eden.
Reply

Kim a month ago
The importance of and respect for nature in Japan is one of my favorite things about the country.
Reply Show all 1 replies

Bonson Lam Author a month ago
Definitely. The respect for nature is not a museum piece or something seen as rustic or irrelevant, but important for everyday life. Nature is the best classroom for us to learn from, even now. Did you know that Japanese engineers used a bird called a kingfisher to help redesign a bullet train? It is called biomimicry.
Reply

Sleiman Azizi a month ago
"Does mother nature shed a tear?" We ought to be able to shed a tear on her behalf...
Reply Show all 1 replies

Bonson Lam Author a month ago
Surely, a meditation and reflection for all our tomorrows. To feel its sorrows and joys will make us better humans.
Reply

Elizabeth S a month ago
We are earthlings after all. What a great way to connect to this deep vein of nature and humanity.
Reply Show all 1 replies

Bonson Lam Author a month ago
Yes so true. I am grateful that in this time of history, we can connect with different people, and learn about their way of connecting with time, space, and this universe, when thousands of years ago, we were left in our little villages.
Reply
12 comments in total