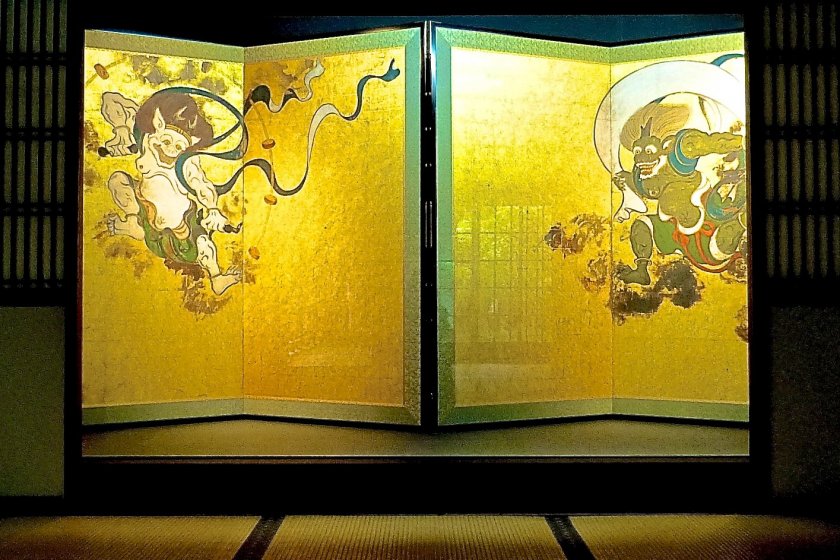 Kennin-ji Temple is situated very near Kyoto's Gion geisha quarters. Go straight on the busy Shijo-dori Street toward Yasaka Jinja Shrine, and turn right at the corner of famous teahouse “Ichiriki-tei”, then walk along Gion’s Hanami-koji street. This is where you really feel Kyoto! After that, you will reach the north gate of Kennin-ji Temple in a few minutes. Not only visitors, but also local people come into the precincts of Kennin-ji Temple all day long. People use the temple grounds as their regular walkway. Kennin-ji Temple is quite open to everyone!

Kennin-ji Temple was established in 1202 as the first temple in Japan to include Zen teachings. But it was not a specific monastery for Zen. Mindful of the wishes of other Buddhist powers such as Enryaku-ji Temple, it started as a school that combined Zen with the Tendai and Shingon sects of Buddhism. The first head priest was Yousai (Esai) who brought the teachings of Zen from China and established Jufuku-ji Temple in Kamakura two years before Kennin-ji’s establishment. The samurai government (the Kamakura Shogunate) appreciated Zen more than the Tendai or Shingon sects.

The famous screen painting of “Wind and Thunder God” is a temple treasure of Kennin-ji; however, in order to preserve it, a precise replica is now on display here. The real, original painting, is kept at the Kyoto National Museum. The painter was Sotatsu Tawaraya (1570?-unknown). On the right side of the screen, Wind God is running across the sky (parallel movement with the sky) to make wind with his white cloth. He has a green body. On the left side, Thunder God is making thunder (horizontal movement from the sky to the ground) by beating his drums. His body is white. The contrast of speed and power, green and white, and parallel and horizontal movements is amazing.

Sotatsu Tawaraya was the first painter of the Rimpa School. But the life of this great artist is shrouded in mystery, even today. We have only very vague information about him.

The description below (from Sotatsu Kenkyu I-II, by Yuzo Yamane, 1994. Publisher: Chuokoron Bijutsu Shuppan) is an outline of Sotatsu's painting history, according to the research of Yamane, an art scholar.

Yamane estimates that Sotatsu was born around 1570. He loved painting and had a natural talent for it. He had his own shop named Tawara-ya, selling folding fans and illustrations. He himself painted pictures and employed many craftsmen. He seemed to be a successful merchant. In 1602, he joined the picture-restoring-team of Itsukushima Jinja Shrine. It was on a project introduced by upper-class merchant and artist, Koetsu Hon Ami. Although this was the first official project for Sotatsu, his work was highly evaluated. And after that, he took on many big orders from temples and the nobility.

By the way, it is said that Koetsu might have been a cousin of Sotatsu’s wife. If it’s true, they were relatives!

The year “Wind and Thunder God Screen” was created is thought to be 1639. Sotatsu might have died just a few years after he completed this work. Yamane points out that Sotatsu really liked gold, white and green. He broke through the previous sense of paintings and tried to do new things on this screen. It was what he really wanted to do. Both of the Gods portrayed here were followers of the thousand-armed Kannon, and no one painted these two follower Gods separate from the Kannon. But Sotatsu focused just on them. And his portrayal of the expressions of these two Gods was somehow humorous. They even show us a friendly smile. And the most noticeable thing he did was that he used a big open space between the two Gods. The two Gods were widely spread out from each other (showing a broad sky) and they are sticking out of the frame (showing their quick movements). These things were never done in paintings then.

Mystery of the screen

Sotatsu seems to have painted the screen for Myoko-ji Temple, which was one of the branches of Kennin-ji Temple. Yamane believes that Sotatsu was able work on this project without restriction. That is why this screen was so unique and free from convention. But why did Sotatsu choose this theme? And why did he paint only these follower Gods? These questions still remain. In 1829 the head priest of Myoko-ji Temple transferred to Kennin-ji and took this screen with him! After that, these two Gods have been kept at Kennin-ji Temple as a temple treasure. Interstingly, another Rimpa school artist, Korin Ogata, copied this Sotatsu screen painting in around 1710, probably at Myoko-ji Temple.

Other highlights of Kennin-ji Temple

There are a lot of things to appreciate at Kennin-ji Temple: magnificent Soryu-zu (Two dragons) on the ceiling of Hatto Hall, the sand and rock garden of Hojo Hall, the beautiful Cho-on-tei Garden (courtyard), ○△□-no-niwa Garden (Maru-Sankaku-Shikaku no niwa), and so on.

If you are planning to visit Kennin-ji Temple, please take your time while you are there. You can sit on a tatami mat and feel the Zen breeze. This is a place worth your time. Do not rush yourself.

Find out more about Kenninji. 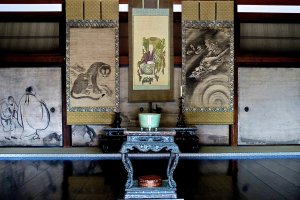 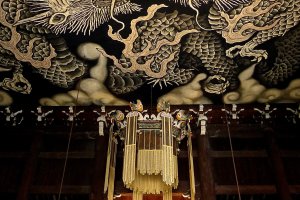 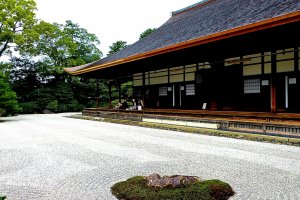 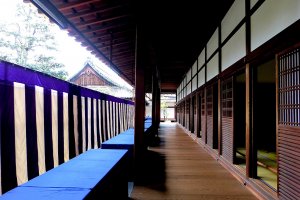 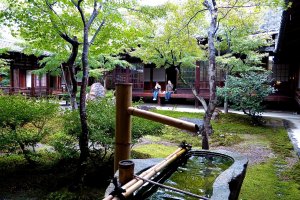