For me, a hotel is basically functional, not a destination in its own right. It's a place to sleep, shower and eat, maybe to relax between bouts of sightseeing and shopping, and that's it. But sometimes there'll be a garden or some other feature that turns a hotel into an attraction, and here it's the lobby, which definitely puts the 'grand' into the Koyo Grand Hotel.

Even before you get inside, there are artworks outside the hotel, with little stone cherubs frolicking in the foliage or standing near the entrance. Then as you go inside, there are three pairs of statues flanking the doors: Roman legionaries outside, Buddhist guardian demons between the sliding doors, and centaurs as you step inside. But you ain't seen nothing yet...

It's hard to know where to start describing the vast array of artworks here. In the far corner, the reception desk is watched over by the heads of deer, elk and zebras on the wall; then at the end of the desk, an angel or incubus is lowering himself into a kiss with his human lover, not at all distracted by the nearby centaur locked in fierce battle with a giant boar.

Elsewhere, there's a bounty of classical statuary; Greek wrestlers, a reclining beauty, a trio of nymphs, elegant women in mirrored alcoves, a mighty bearded figure raising a woman aloft. Every time you turn your head there's something new: cherubs petting by the payphones, a cabinet full of antique decorative pipes, a papyrus of Tutankhamun's mask, more cherubs clinging to the standing chandeliers like tiny mythical pole dancers (the artistic ones).

I could go on, but I'm fairly confident you'll have got the idea by now. So if you're arranging to meet a friend possibly for lunch or cake at the elegant lobby cafe, or you just want to feast your eyes on the wealth of art and antiques, then this lobby is a pretty damn special place to do so.

It's about ten minutes' walk north-west of JR Sendai station, also served by the city's subway, and from JR Aoba-Dori station. If you're using the subway, it's very close to Hirose-Dori station on the Namboku line. 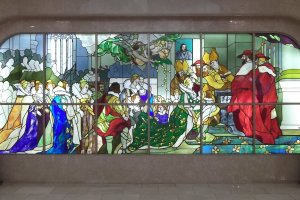 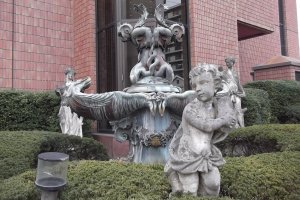 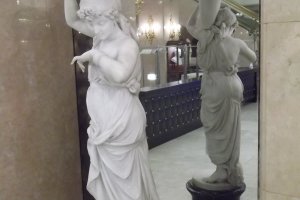 Bonson Lam 3 weeks ago
Wow what a combination!! If only theses larger than life personalities came to life.
Reply Show all 0 replies

Sleiman Azizi 3 weeks ago
What a curious sight that must have been.
Reply Show all 0 replies

Kim 3 weeks ago
The stained glass display is beautiful!
Reply Show all 0 replies
3 comments in total